Today has been great. This morning I received an MIR alert from sweet Mari. She wrote:

"At my house it started early. I had a lot of trouble with my mouse and then my desktop – things that had NEVER happened before. My mouse did fall and landed upside down. IMMEDIATELY I lost all contact with the display.... I came back and once again I couldn’t see the screen. I had to step it thru the “VDMI” and “other” displays and then suddenly it came back on!  This happened to me all day yesterday. But today it’s all acting fine!  That’s why I checked the computer for MIR dates. Why am I NOT surprised that it’s that time!....(And I can’t even describe what was going on with the DirectTV remote all day yesterday.)

I dread that MIR’s still going to be here for Thanksgiving! Even now I’m dreading going shopping for Turkey Day vittles!

Batten down the hatches!"

With so many things going on here I had totally forgotten it was M.I.R. (Mercury In Retrograde) Time, again.

I felt relieved about Mari's alert, because it actually explains a lot of things for me. So after replying back to Mari, I went to the 2018 Old Farmer's Almanac to check out the dates for M.I.R Time—November 17th - December 6th.

After reading the article I clicked on my Libra astrological sign to see what my sign can expect. And basically it said that I should not have a makeover. Indecision prevails and for me to limit my purchases.

I am cool about not having a makeover, because I know it would not do me any good, because I'm old. What has fallen has fallen and is still falling and will keep on falling. So I can deal with that—I think. I am just not sure.

Reading the last part of their M.I.R. Libra prediction was a little upsetting to me, because it said that Libra represents beauty, grace, diplomacy and charm and thanks to our friend Mercury—all of us Libras are completely out of balance for the time being.

This disturbing news hit me like a brick wall, because sadly I think it is true, because grace and charm have completely gone out the window and Tony can vouch for that, but he had better not do so. And that is a threat.

Lastly it recommended that I just relax, rejuvenate and refresh, but how can I do that now? I'm too upset knowing that I am completely out of balance.

After writing back to Mari and sympathizing with her about it being M.I.R. time again and it happening during the Thanksgiving holiday, I clicked on another e-mail from her with a link, that made me forget about my many problems: being charming, graceful, diplomatic and resisting a miracle makeover.

Because after watching Mac King's Infamous Rope Trick, which is incredibly great. A magic trick that even Penn & Teller can't even explain how he did it—I felt almost back to normal. So, I then had Tony watch it and he was as amazed as me.

And that is how I am going to end this post on a good note, because somehow I am going to have to figure out how to do the recommended 3 "R"s: relax, refresh and rejuvenate without shopping.

Y'all have a great evening and keep on laughing!
Posted by cousin nancy at 12:57 PM No comments:

Becky Crouch Patterson! or Zooming! or The Mineral Man!

Today has been a lot of fun. I spent about four hours this morning writing on my upcoming third novella The Cowgirl Sisterhood: Riders In The Sand, but I had to stop writing for two reasons.

Knowing that I must take a writing break Tony and I decided to go to Kerrville to get some groceries, at the big H-E-B.

But before we went grocery shopping, a chore Tony never enjoys doing, we decided to drop by Wolfmueller Books, so we could visit with Sandy & Jon and catch up with each others latest news.

When we walked inside the world's greatest bookstore Jon & Sandy greeted us. Then I immediately was drawn to this book display near the front counter. 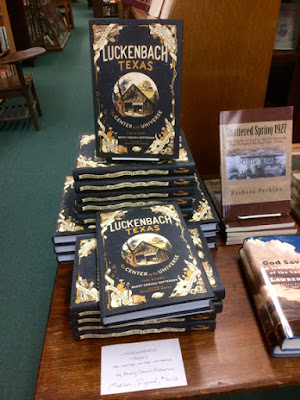 "I love this book," I said. Then I picked it up to admire the intriguing front cover. 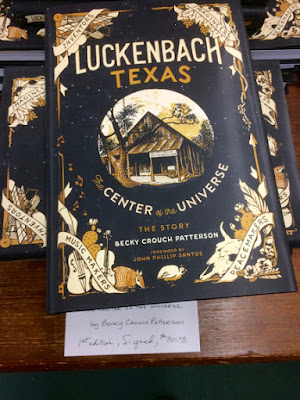 "This is a great book and it just arrived," Sandy told us. "In fact, Becky Crouch Patterson just delivered them to us and she signed all of these first editions for us. Do you know Becky?"

"She's a fabulous author and a good friend of ours. She is Hondo Couch's daughter and she has also written several other great books...."

And a few minutes later, I said, "I love Luckenbach, Texas and I want to buy this book."

As I was paying for Luckenbach Texas: The Center of the Universe Sandy said, "You are the very first one to buy this book from us..."

Then Jon says, "Looks like the parade is about to start."

So Tony and I followed Sandy outside, so we could join all of the other onlookers watching the Veterans' Day Parade, come down Earl Garrett Street. And it was a lot of fun. Here are just a few pictures of the parade that I took using my iPhone.

In this photo, a man inside the pickup saw me and as he passed by us, he hollered, "Are you zooming?"

Then the people around me turned to look at me, and I half-hollered, "Yes!" And after The Ranch truck and trailer passed by us, two nice women, standing beside Sandy turned around and asked me, "What does zooming mean?" 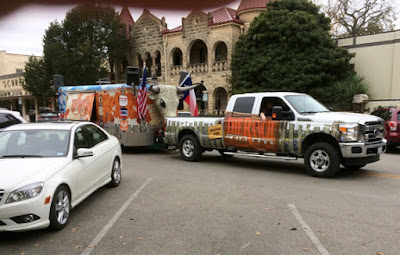 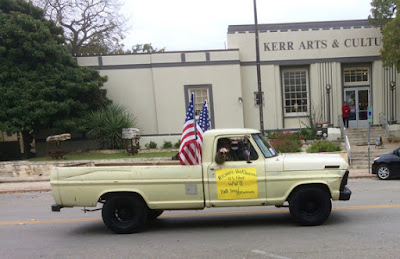 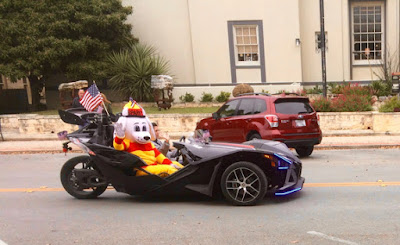 After several other floats and parade entries passed by us I heard a familiar voice holler from the street, "Hey, Nancy! Tony! Sandy!" And as we waved back to The Mineral Man, and while Sandy was thanking a very friendly WWII Veteran, I snapped this picture of our dear friend riding on the Hill Country Shrine Club of Kerrville, Texas float. 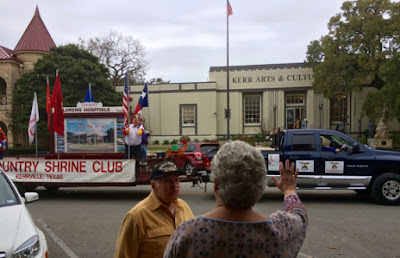 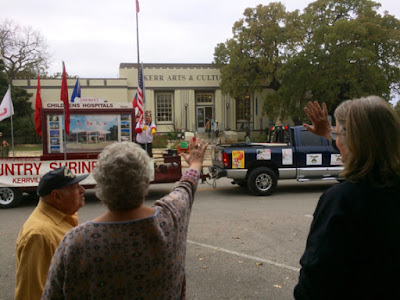 When the parade ended, the three of us went back inside Sandy & Jon's bookstore to find Jon covered up with customers. So we quietly adios-ed our friends and left them to help their customers find books.

Our shopping spree at the big H-E-B was uneventful, unless you think us forgetting that we had accidentally parked in the designated "Curb Service Only" parking spaces. We parked in the "H" space.

And we did not realize that we had done that until we returned to the pickup with a grocery cart full of groceries. "Oh my gosh," Tony said. "I bet people are hating us for doing this."

"Don't worry about it," I remarked, casually. "They'll just laugh and call us two, old, stupid, senior citizens. I can live with that...."

Y'all have a great evening and keep on laughing!
Posted by cousin nancy at 3:39 PM No comments:

We've still been busy. So you might be asking, "Doing What?" Well, for starters we've been working on my new writing cabin.

The weather played an important role in completing this task, because it could not be raining when we transferred our stuff. So we spent 8 hours, four days ago, on a beautiful sun shiny day completing this project. And the good news is my shed/writing cabin is now totally insulated except for the ceiling and we wired it for electricity.

So all we have to do now is connect the electricity, put up the drywall and decorate it. And Tony's shed is now organized with a lot of our stuff still needing to be unpacked and it should be a breeze for us to fix his man-cave.

Yesterday, another beautiful sun shiny day, we painted our other shed that is located across from our circular driveway. The painting went fast, but we had to stop and go to the Home Depot in Kerrville to buy the trim boards for it. And by 4:30, yesterday afternoon, we had painted the trim boards and put them up. Then we celebrated our accomplishment with a couple of Lone Star beers.

We still need to get a few more 1"X4"s to finish trimming the door and window, but that will just have to wait for a few days, until we get another beautiful day to paint the remaining trim boards and put them up. Anyway here is a picture of Henry being caught watching Tony work on the shed. 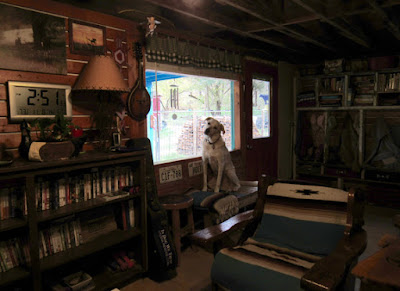 And here is a picture of our newly painted bistro table, in our front yard, with the almost finished shed, in the background. 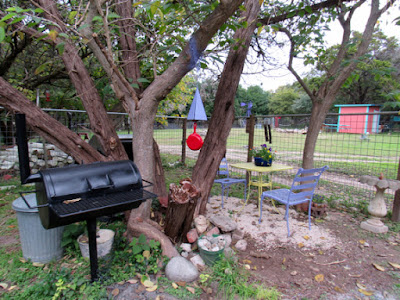 Please note that our enlarged front yard took us a whole day also, because we had to move the fence, paint the table and chairs and then bring in gravel and spread it around. And that's why I've been too busy to blog or work on my novella lately, because we've spent our days outside improving our Big Foot Ranch.

And now with our weather turning to rain and much cooler days beginning tonight, I plan to stay inside, cozy up to our awesome, wood-burning stove and start writing again.

Last week, when Tony and I were working next door, at Escondida, the beautiful resort owned by the much loved Texas Country Reporter Bob Phillips and his lovely wife Kelli, our dear friend Sarah Robinson introduced us to Dan White "The Roadhouse Troubadour."

Dan White, a very talented singer/songwriter/musician was over at the resort setting up his equipment, because last Saturday night, he preformed his awesome country music for Kelli's & Bob's guests.

And to say the least—Dan's fabulous music and his humorous stories made it a wonderful evening never to be forgotten. So I hope that you will check out Dan White "The Roadhouse Troubadour," because we love him and his music. And please click here to watch and listen to Dan White performing. 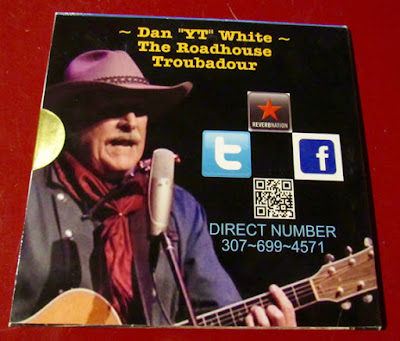 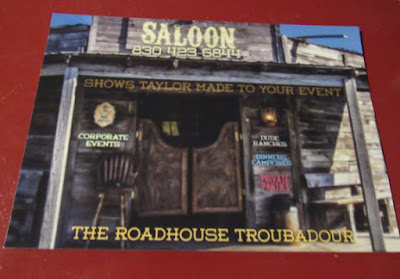 After we visited with Dan the other day he gave Tony and me this album, I Haven't Been Everywhere Yet...But It Is On My List, and we love his songs so much—we can't quit listening to Dan's CD. 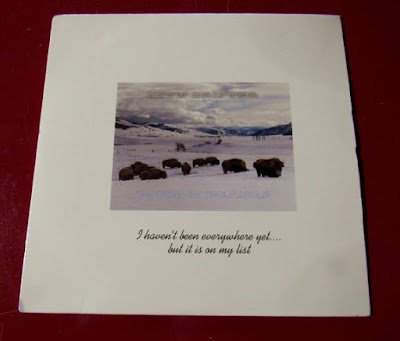 Before I finished writing this I went into the bedroom to put on a sweatshirt and I found Henry Standing Bear sleeping on the bed. He looked so peaceful, in La-La-Land, I had to grab my camera and take this picture of him, before I go take a short, cozy nap with him and the rest of our dogs (My Best Friends). 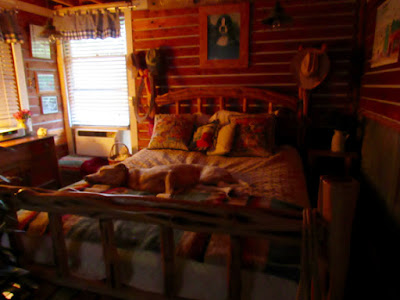 P.S. Gaby, we received your sweet note from Germany and we miss you more!
Posted by cousin nancy at 5:08 PM 5 comments: