This Polar VorTEX(AS) Sucks! or My Bucket's Got A Hole In It!

This is going to be my story about the Polar VorTEX(AS) that Tony and I have survived so far. First off, knock-on-wood, T. and I and our 4-leggers are doing fine even though we now have no running water, because our pipes froze up a few days ago. Anyway, here is my story.

After Tony and I attended a super fun birthday party for our friend, in Kerrville, we went to the small H-E-B to stock up on supplies, because everyone at lunch had talked about the fierce polar vortex that was predicted to hit our area late Thursday afternoon.

So Tone and I stocked up on bottle water and about another week's worth of food, because the weather casters had been warning us about the severe weather maybe lasting as long as five days. And I was excited about it snowing here, because that rarely happens here and it is pretty.

Well, the polar vortex decided to come earlier than anticipated and by 11:00 that morning the temperature outside was near freezing and dropping fast. And I was so glad that we had stocked up on extra food and supplies. We were prepared or so I thought.

Friday morning, it was in the lower 20's and around 8:00 when Tony went outside to warm up the truck before going next door to work, he came back inside and told me that a big cedar tree had fallen during the night and it was blocking our driveway and had damaged some of our fence.

So Tony and I put on our heavy jackets and gloves and went to work outside: removing the big, dead tree. Here are pictures that I took of Tony with his chainsaw, before he went to work cutting up the tree, so we could clear the driveway. 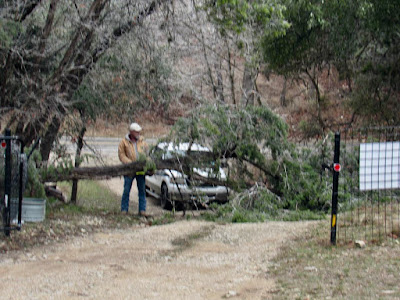 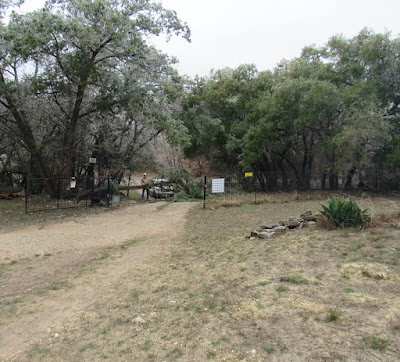 An hour and a half later, the driveway was cleared, so Tony went to work next door and I took this picture to show y'all how icy the trees had become before I went back inside The Cabin. 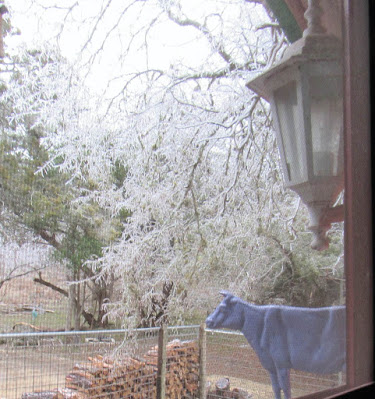 Saturday was freezing cold and uneventful, except we started dripping our faucets, because we stayed in the 20's all day and it was getting colder.

Sunday morning the weather took a nose-dive. Tony went to work next door and by the time he was done working, the roads had gotten so slick he could not drive the truck home, so he had to walk home.

I was unaware about how bad the road conditions had gotten outside and while I was washing some dishes and looking out the kitchen window I saw Tony walking up our driveway and he was holding something in his hand, but I could not tell what it was.

When Tone came inside The Cabin he was holding a beautiful bouquet of red and white roses in his hand, and he said, "These are for you. Happy Valentine's Day. " And then he and bothI started laughing, because we both knew that he had not gotten me those pretty flowers. Because it didn't take a rocket  scientist, to figure out that sweet Sarah and Darlene, over at Escondida, had sent the leftover flowers home with Tony to give to me. 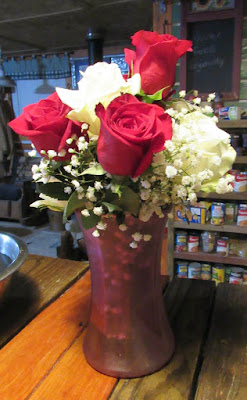 After I put the lovely flowers into a vas I heard the weather forecast which was not good. So Tony and I  decided it would be a good idea for us to store up some water, because our flowing faucets were hardly dripping a drop of water at full blast.
So we spent about two hours drip-by-drip, filling every container and empty water bottles that we had, in case the pipes froze up. Here is a picture of the kitchen island covered in water containers. 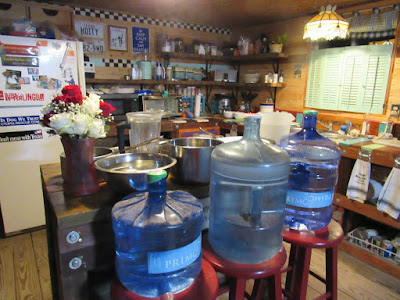 I am so glad that we did that, because the pipes froze up during a rolling blackout during the wee hours of the night while we were sleeping. And that lapse of electricity turned off the heat lamp that we had inside the pump house. So when the power did come back on we did not know that the pump house lamp needed to be turned back on.
Monday, February 15th
Monday was totally miserable, because of the polar vortex. It got down to 6 degrees. 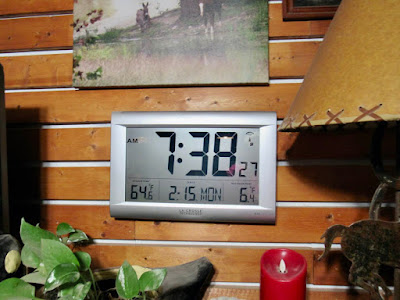 The electricity kept going on and off, we both wanted and needed to take showers, but we couldn't, etc. And even if we had wanted to go somewhere we couldn't, because our truck was stuck next door and it was too icy and dangerous for us to be outside anyway.  Plus we had gotten over 5 inches of snow! 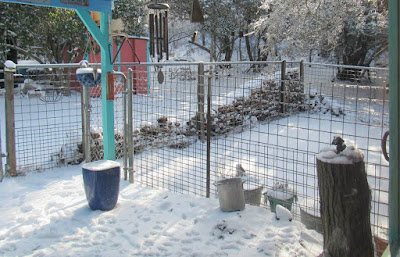 Later that night, I was sitting in the dark, because we had no electricity and I was so bored I decided to get my "headlight" glasses that have lights on them for reading in the dark. 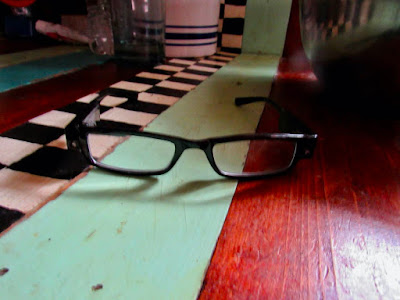 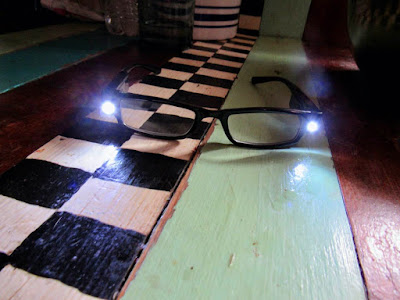 And those glasses were fantastic for reading or just walking inside the house. Even though I did scare Henry half to death when I accidentally woke him up.
Tuesday, February 16th
Tuesday afternoon around 3:00, the temperature got up to 33 degree! 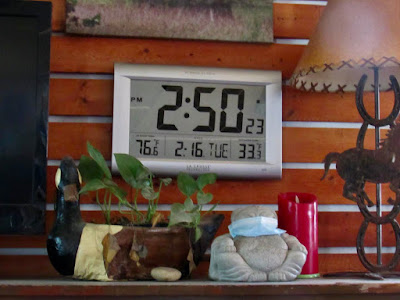 So, I asked Tony to please help me clean out our wood burning stove, because it was so full of ashes. And because our regular bucket (an old, stainless pot) that we normally use to remove the ashes and embers was outside—frozen solid in the ice. So I suggested that we use the other copper, decorative bucket that we normally use to store our kindling in. And that was a big mistake. 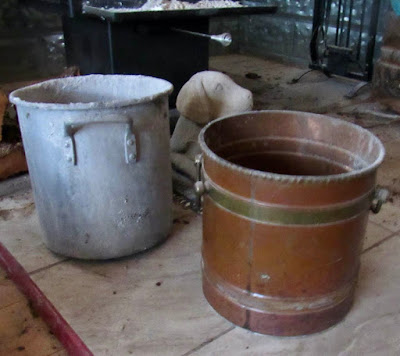 Tony filled up the copper bucket that once had belonged to my sweet mom) nearly to the top with burning embers and hot ash. When I handed him the pot holders to carry the bucket outside, he lifted it up the bucket and the whole bottom fell out onto the tile that surrounds our wood burning stove!
Thinking fast, after this unwanted, could-be dangerous event, I grabbed our metal kitchen garbage can, lifted the trash sack out and carried the can over to where the hot ashes were. Then Tony grabbed the fireplace shovel and began piling in the hot embers and ashes as fast as he could. And after that Tony carried out the garbage can and dumped the hot ashes and embers into a pile of snow that melted very quickly.
And the good news is: it didn't hurt, discolor or crack the tile. I took this picture of Mom's copper bucket after it had cooled down. And as you can plainly see I now can say, "My bucket's got a hole in it." (Sorry Mom) 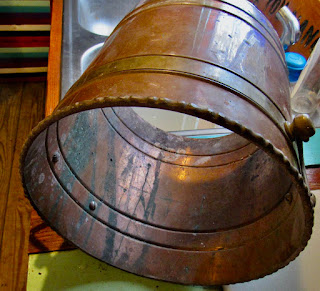 Well, believe it or not—I am posting again. But beware: this is a short post, because Gaby's cute, snail-mailed postcard, that she sent to us from Germany, arrived today in our mailbox.

Tony and I love Gaby and her daughter Xenia. Tone and I met these two great women many, many years ago, when they came out to the rescue ranch one Saturday to get a tour. Long story short, when T. and I met them we instantly fell in love with these ladies and became friends.

So that day we gave Xenia and her sweet mom the grand tour, which included them meeting everyone of our dogs and Kinky. And since that day, we've kept in touch with them and every time that Gaby comes to visit her daughter and her family, in Texas—they make a point to come visit us or we meet somewhere, so we can get in a good visit.

Anyway, before I write Gaby a note and e-mail it to her I want to show y'all this great postcard, because I am planning on framing it and hanging it up, in my writing cabin. Here's Gaby's "great advice" postcard: 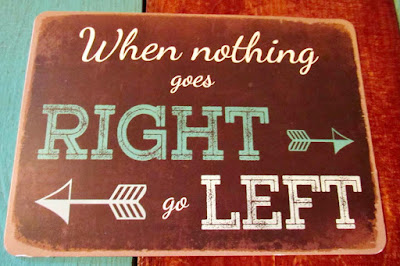 Y'all have a great evening and keep on laughing!
Posted by cousin nancy at 5:10 PM 2 comments: 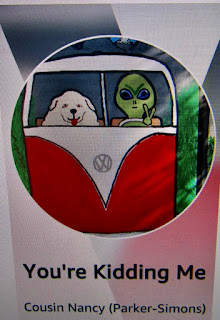