The Cousin Nancy Show Trailer Is Already Up There!

Today has been great. I have spent over 8 solid hours making a trailer for The Cousin Nancy Show and to say the least—I am pooped, but it was worth it.

I just finished editing it and I uploaded it to Buzzsprout to publish immediately and believe it or not The Cousin Nancy Show Trailer is already up there! Just click the link below to listen.

Or go to cousinnancy.com, scroll down to podcast and click. It will take you to Buzzsprout's page for The Cousin Nancy Show.

Then scroll down the page and click on "Trailer" and adjust the volume to your liking. And I hope you enjoy it and it makes you laugh.

Now, I must wait on Apple to approve my podcast for their platform, which can take up to 14 days before putting it on their Apple Platform and then it will be added to Spotify, Google, etc..

So while I am waiting on Apple, I hope to do 2-3 podcasts in the meantime and then start doing 1 a week.

My trailer is not totally perfect, but it is close enough and my episodes will just get better and better as I become more comfortable with the technical stuff.

That's it for tonight, because I am going to make a few phone calls to let family & friends know the trailer is up and running.

You Think You're Done, Yet?

The past ten days I've been very busy learning more about professional podcasting while Tony has been having to go back and fourth to Medina to pick up several packages delivered to me, at the Post Office.

And I do hope that the time and the money that I've already spent for podcasting is going to pay off for me. Because this morning I got out my calculator to add up just how much money I've already spent on The Cousin Nancy Show podcast. And that is not counting all of my time.

After adding it all up it was pretty shocking to say the least. Here are just a few pictures of the equipment that I've recently purchased. 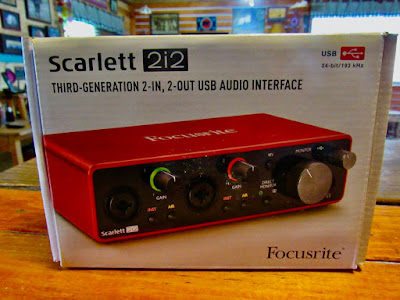 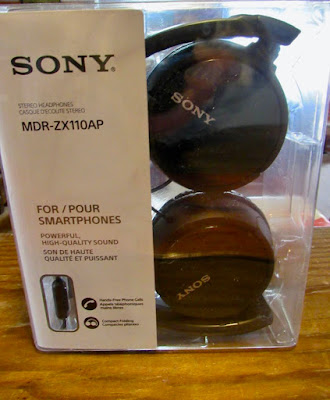 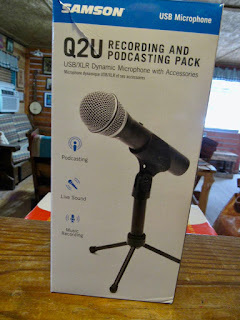 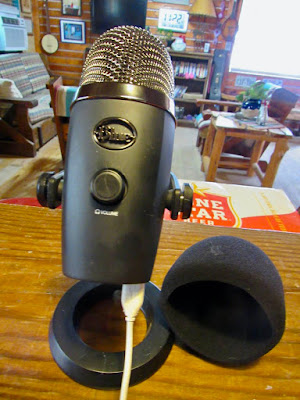 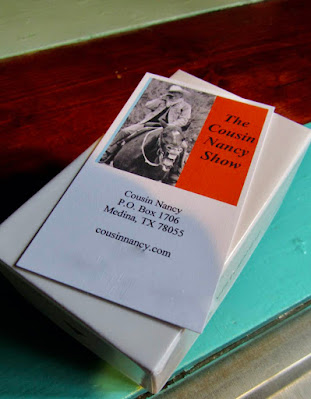 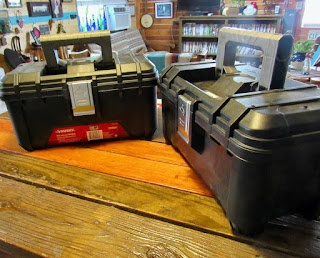 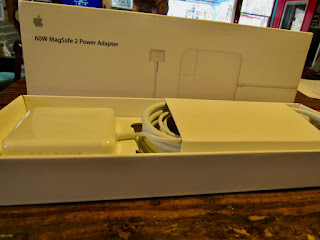 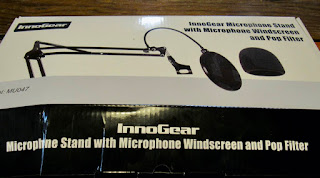 And yes, I know that $1,035.93 is a lot of money to spend on podcasting, especially when there are many podcasting hosts out there that are totally free. Like the ones that offer you a free app and all you have to do is use your cell phone to podcast, but after all of my research I chose to use Buzzsprout. Because Buzzsprout is the most popular podcasting host and it is highly respected among the podcaster community.

So when Tony got back home from working, I told him/confessed and it made him laugh. Not because we are rich by any means or have plenty of money to throw around—Tony laughed because he thought it was going to be a lot more money, because of all of the packages that he has been picking up for me. And after Tony had quit laughing, he teased me, and he asked, "So, do you think you're done, yet?" And that is just another reason why I love Tony.

Speaking of love, yesterday I got a sweet e-mail from my dear friend Gaby, who lives in Germany. And when I opened up her e-mail I read the first couple of lines and I burst out laughing. Because Gaby was wishing Tony and me a happy anniversary and she was apologizing for being a day late, because our anniversary is March 10th.

So I quickly sent her a note back telling Gaby that once again Tony and I had both forgotten our anniversary and I also thanked her for reminding me, so I could go tease Tony about it. And Tony laughed about us both forgetting our anniversary, again.

Lastly, early this afternoon I was talking to my sweet sister Cindy, on the phone and I was telling her about how much money that I've already spent on my upcoming podcast and we were laughing about it. "Cindy, the last few days I have probably spent at least eight hours trying to find the perfect, royalty-free, no copyright music to use on my podcast. "

"Well, two days ago after going to several of the royalty-free websites that Buzzsprout's Team had highly recommended I found nothing that I liked. So, I then went to Pixabay, which Buzzsprout, in their YouTube tutorial, had rated Pixabay as their number one choice to find royalty-free-music."

"Anyway, Pixabay is a fabulous site where musicians upload their music for anyone to download for free and to use however they want to. And it is royalty-free with no copyright."

"Anyway, I finally found the perfect music for my podcast after being on Pixabay's site for several hours. After I had downloaded the Clive Romney song for free, Pixabay suggested that I thank Clive Romney for the use of his music and that I might also consider making a donation to him, before leaving Pixabay's site."

"So, I decided to make a small donation of $50.00 to him, because I wanted to sort of pay it forward and do the right thing for getting to use his music for free. And also because in the picture of him, on Pixabay, Clive has white hair underneath his cowboy hat. So I figured that Clive Romney is probably some old, starving musician, on a fixed income, just hoping to make a little extra spending money from donations."

"That was nice, Nance," Cindy said.

"I thought so too," I said, and then I burst out laughing. "Cindy! I Googled Clive Romney and he is very famous—for his music and he also performs at Cowboy Poetry events, too. And get this—Clive Romney only joined Pixabay on January 7, 2021. Five days ago!" Then Cindy started laughing with me.

"Cindy, can you believe that I was thinking that I was helping out some poor, old musician with my donation. Heck, I bet when Clive Romney got my e-mail thanking him for letting me use his music for my podcast and for also making a donation to him—he probably felt insulted by my $50.00 donation. And he probably also thinks that I am one cheap, ungrateful woman..."

It has been a beautiful day outside and even though I wanted to be outside grounding myself by doing a little Earthing— I ended up spending most of my day inside working on my upcoming podcast.

Anyway, I want to give y'all a little teaser and show you the artwork that I've designed for my podcast cover—The Cousin Nancy Show. And please note that Tony took this picture of me and Maya laughing several years ago. 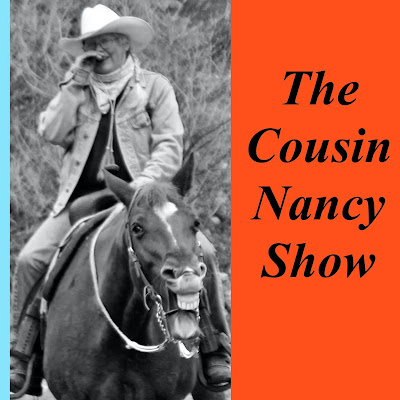 And if y'all are still interested I would also like to give you a peek at my cousinnancy.com website. I totally love it, because I hired the best—my dear friend Pat Symchych, an extremely talented website builder/host to build mine for me. And I think she did a great job. "Thank you, Pat!"
And please note that near the bottom of my website page you can click on the podcast button to see how my podcast looks—even though I have not made my first podcast yet. So now all I have to do is start podcasting which I am hoping to do by next week after a few practice runs.
And that is about it for tonight.
Y'all have a great evening and keep on laughing!
Posted by cousin nancy at 5:18 PM 4 comments:

First off, I am done with that horrible polar vorTEX and I'm not going to talk about it any further, because of the nightmare that Tony and I had to endure for 11 days going without any running water. Seriously, it nearly did me in mentally. And if you don't believe me—just ask Tone.

But to help fight off my depression during those cold, stressful days and nights I put almost all of my energy into learning more about podcasting. And after all of those hours I spent on research I went on several Amazon shopping sprees.

You know that old saying that goes something like this, "...Two is nice. Three is a crowd, etc." well, you might say I went a little overboard purchasing some of my podcasting equipment.

Okay, I admit that podcasting can be as simple as using an app and a cell phone and there is nothing wrong with doing this.

But, because I plan to do a lot of interviews with friends, professionals, musicians, etc. and will also be doing outdoor podcasting with complete strangers, I realized I needed to have at least two microphones and sets of headphones for each person I interview.

I also discovered that I needed a voice interface to plug into the mics before plugging them into my GarageBand software, for editing. And so not to get too technical here—I bought Buzzsprout's top rated, highly recommended podcasting equipment that would insure quality sound.

FYI: Buzzsprout is considered to be one of the top, most popular podcasting hosts and after watching their videos where they rated all kinds of different podcasting equipment in all kinds of price ranges, I took their advice and purchased the equipment, in my price range, that they had reviewed and highly recommended.

Anyway, over the last couple of weeks my podcasting equipment has slowly been arriving piece-by-piece and with each delivery of equipment it has put a big smile on my face.

Up until today I have received the small, but powerful, red Scarlett 2i2 Interface, two Sony headphone sets, all kinds of different cables and jacks, etc.

Well, today the highly rated, 5★★★★★s— 2QU RECORDING AND PODCASTING PACK USB/XLR Dynamic Microphone with Accessories arrived!! And as you can see below— I purchased four of them. Yes—four microphones, because the way I think: "If three is a crowd—Four is a party! 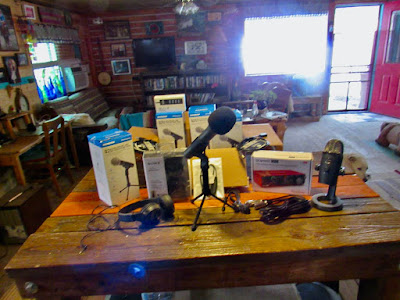 On the far-left of the picture below is my black Blue Yeti that I purchased a while back when I decided I wanted to do podcasting and if I have more than four guests on the show, I will use it even though it is not a dynamic microphone. 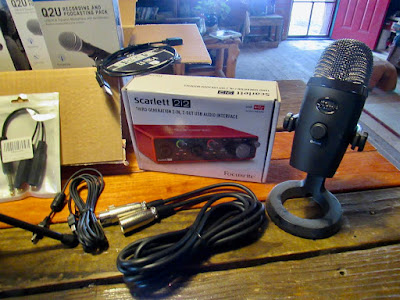 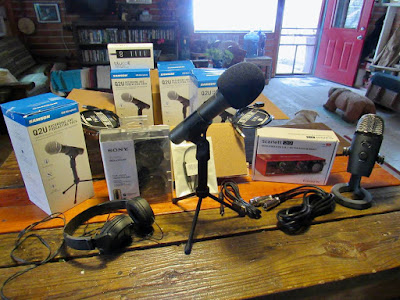 And as I finish writing this post Tony just put another log on the fire for me, as Henry Standing Bear watches him, from my chair. 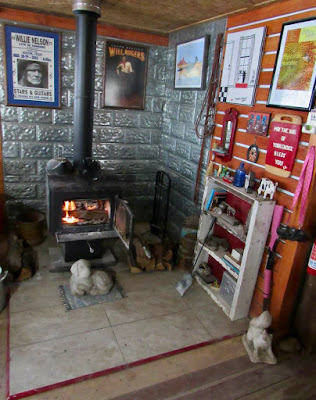 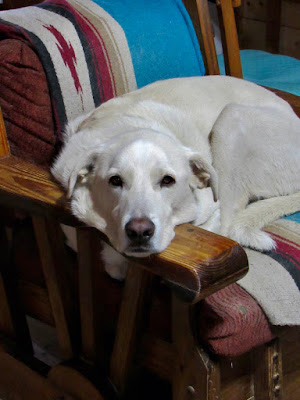 Y'all have a great evening and keep on laughing!
Posted by cousin nancy at 6:37 PM 4 comments: