At last I have the time to write a post, because we've been too busy working and I've been spending all of my spare time writing/wrapping up my 3rd novella. Seriously, I probably only have  about ten more pages to write to finish it.

Before I write any more I have three recent pictures that I've taken of Henry Standing Bear. The first two are of Henry Sitting Bear and the last one I just like Henry Resting Bear. 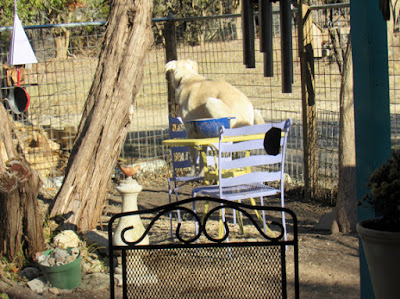 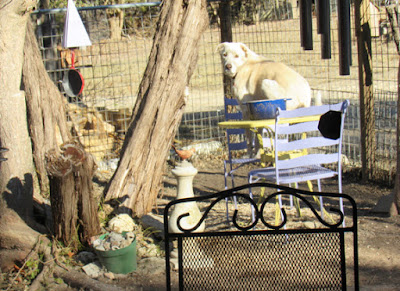 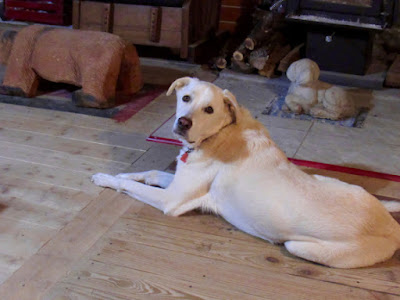 This afternoon our dear friends Lisa and Eileen came out, so they could search for arrowheads with Tony, while I entertained them with some of my favorite songs.

But before the three of them started digging away and sifting through dirt while listening to great music, Lisa handed me her empty bottle of Le Cigare Blanc that has an alien head stamped on the top of the bottle cap and a picture of an alien craft beaming a green light, down on a town. 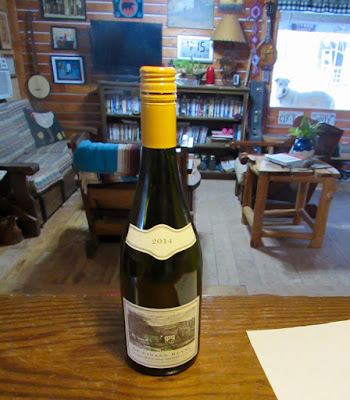 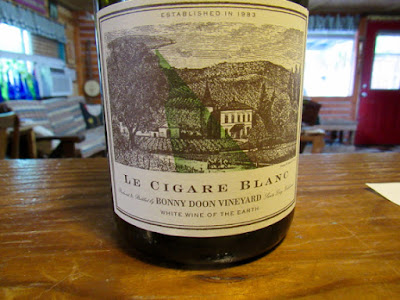 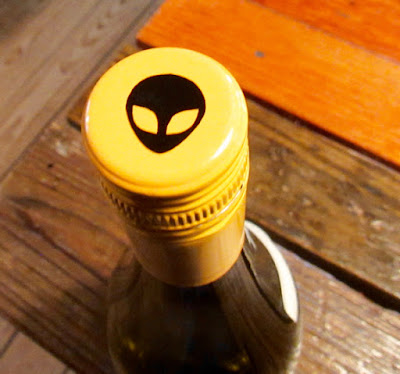 Lisa gave me this wine bottle, because right after we had had our first AACC (Ancient Alien Coffee Club) meeting she and her husband went to San Antonio. And when they were enjoying their  lunch, Lisa saw their wine bottle and she took it as a sign that our AACC was right on track, because neither her or her husband knew anything about this fine wine when they had ordered it.

And because I had agreed with Lisa that it was definitely a sign—she saved the bottle and gave it to me , so I could put it in my writing cabin—The Last Resort. And here is the link to Bonny Doon Vineyard, so you can see the label more clearly to see the alien spaceship beaming down on the small village.

So, outside, during "the dig" Lisa told us that this is a great tasting wine, so she, Tony and I went ahead and nominated Eileen to be in charge of refreshments at our future AACC meetings. And in so many words we told Eileen that since Le Cigare Blanc is our club's official wine we would recommend that she brings it to all of our future meetings.

But now that I think about it, we might need to change the time of our (breakfast) coffee club to late afternoon events, so we can drink this wine instead of coffee.

Anyway, Tony and I had a wonderful time with Lisa and Eileen today and we did do a lot of laughing.

FYI: It appears that Tony and I will be working a lot of hours this week, so this is my post for today, because I need to get back to my writing.

Y'all have a great day and keep on laughing!
Posted by cousin nancy at 5:42 PM No comments:

Today has been great. We worked this morning for a few hours and we're fixin' to go back to work for a few more hours.

We went to Kerrville this afternoon and a blast at Wolfmueller's Books, because we had so much fun listening to Jean's stories about her friend Mr. Pickle and her hilarious adventures in Germany.

And other than that there is not much to write about except this morning sweet Mari sent me this and I am still laughing about it. I hope the Bat-Van makes you laugh, too. 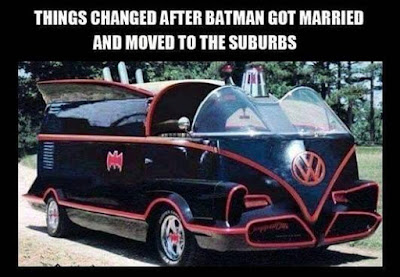 Y'all have a great evening and keep on laughing!
Posted by cousin nancy at 4:35 PM No comments:

Yesterday morning Tony and I met Lisa and Kris at a secret location (Randy & Lisa's Save Inn restaurant) in Kerrville for our first AACC (Ancient Aliens Coffee Club).

Sweet Eileen was supposed to come, but could not make it, because she had "pastel painted herself into a corner" at her art class, in Boerne. The Mineral Man (Kris' husband) was a no-show too and Kris was a little vague about why he could not make it. But no worries they will both be at the next meeting.

Tony and I were the first to arrive at our secret destination and we got to have a fun visit with Lisa and catch up with her and Randy's news.

Lisa was second to show up and before she even sat down at our table, she and I were already talking about things we needed to discuss at our first AACC meeting.

By the time Kris arrived we gave Lisa, the owner, our orders and Tony and I ordered the exact same thing. Then our meeting commenced.

Right off the bat, we all agreed what our secret hand signal would be and what our secret code word would be. Then we talked non-stop about how much we love watching the History Channel's Ancient Alien show.

I felt like a dummy, because I had never heard of Arthur C. Clarke and I could only remember that I had liked the movie 2001: A Space Odyssey and that Hal, the computer, had really scared me.

I was thrilled that I had remembered at least that much about the movie, since it was made over 51 years ago. And before I rejoined the conversation I wondered to myself if Alexa is maybe the new Hal?

When Kris and Lisa were telling me about the face on Mars, Lisa grabbed her cellphone and showed me this picture.

After I got over the shock of seeing this Mars man or martian, I told them about me writing a blog about watching Nasa's Unexplained Files where they sent a land rover out on Mars surface and it came back with a half-eaten jellyroll. "And Nasa has never been able to explain it, because it is actually a half-eaten jellyroll left there by someone or some thing...."

Anyway, after everyone had quit laughing I realized that we had finished eating breakfast, so I announced, "I am so excited about our Ancient Aliens Coffee Club and all of this. When I get home I am going to Buy Clarke's books: 2010: A Space Odyssey and 2061: A Space Odyssey and....And as soon as I finish writing my 3rd Cowgirl Sisterhood novella I am going to retire the Cowgirl Sisterhood for a while and write another fiction book about our AACC going on a fact-finding mission/adventure in Terlingua! And we could meet/get abducted or something by some aliens."

"Then I think all of us should go out to Terlingua," Lisa suggested.

"And while we are out there we could make a short movie, too!" I said. "Starring Little Debbie of course, and we could wear our alien-attracting helmets (upside down pot pie tines tied down on our heads) that I made for our Longmire—Texas Style video spoof....And Chet O'Keefe could star in it too and we could ask him to write the soundtrack for it...." The wheels were set in motion and already turning—so to speak.

Before Tony and I adios-ed our friends, Kris and Lisa promised me that they would watch the movie Paul and I promised them to read Clarke's books before our next meeting and that I would send them the link to my blog post about the jellyroll on Mars.

So, as I finish writing this I want to give you the link to my June 5, 2015: A Roll or Flat Tire! blog post about the jellyroll found on Mars.

Y'all have a great evening and keep on laughing!
Posted by cousin nancy at 3:01 PM No comments:

Yesterday afternoon after working next door I came home and put on my sweats and pink Crocs. Because I was already tired I took a short nap with our dogs and when I woke up I felt refreshed.

Knowing that I was not going to be working today and would have the day off, so I could write, I divided my evening by watching several episodes of Ancient Aliens and Downton Abbey, because I am addicted to both of those shows. And it was after midnight when I finally went to bed.

Today has been great. This morning after Tony went to work next door I wrote and edited my nearly finished novella.

Around 10:30, I decided to take a break and go outside and do something I haven't done in a very long time—Earthing! And I sat outside barefooted for over an hour and I must admit that it feels so good to be more grounded. And I have Carol to thank for reminding me about earthing last week when we spoke, because she is now into earthing. Here is a short video that I made on July 4th 2014 about my earthing project. 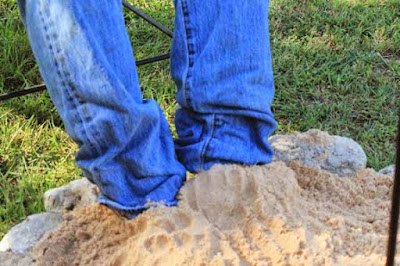 Here is another 2014 picture of my old earthing station when we still lived over at the rescue ranch. 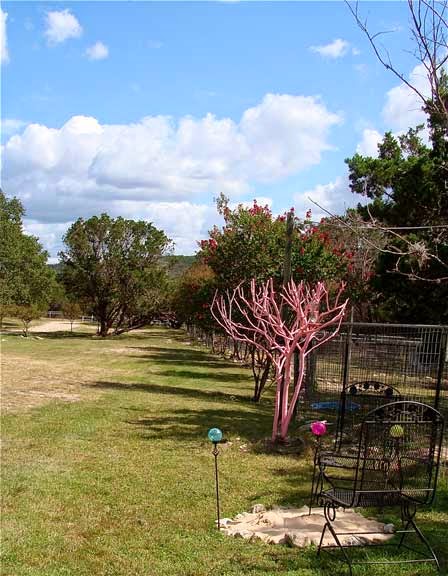 After doing my earthing I came inside and checked my e-mail. And I am excited to say that Eileen's, Lisa's, Kris' & Jim's, Tony's and my first AACC (Ancient Aliens Coffee Club) is set for this Wednesday morning at a secret, undisclosed location (The Save Inn), in Kerrville.

And that is  about it for today, because I must get back to my writing.

Y'all have a great evening and keep on laughing!
Posted by cousin nancy at 2:44 PM No comments:

Well, I am probably the last to wish y'all a happy new year and I apologize for taking so long in doing it, but at least I am doing it now.

This past week flew by and it was a whirlwind for Tony and me, because we worked a lot of hours next door, at Escondida Resort & Spa.

Their New Year's Eve Roaring 20's party was a total blast. Darlene's food was so delicious I actually got tired of the guests telling me to please go tell Darlene that she had outdone herself in the kitchen. And I am sure that just running back and forth to the kitchen to give Darlene another compliment from one of the guests added an extra 10,000 steps on my overloaded pink pedometer.

The evening was filled with Little Jewford's magnificent piano playing and he was so funny—he had the crowd begging for more music and more jokes and one-liners.

Around 11:20, as the guests sang along with LJ and were dancing the Charleston, etc. I plopped down on a sofa to rest for a minute. But when I tried to stand back up, my feet were so sore from walking back and forth to the kitchen to give Darlene another guest's compliment on her delicious food, I grabbed Tony, after he had taken pictures of the guests dancing and begged him to please take me home. "Nance, it is 11:25. We only have 35 more minutes until midnight. Can't you wait?..."

I couldn't wait, so Tony took me home and dropped me off and then he returned to the party to take more pictures and bring in the new year. And an hour later when he got back home—I was already in bed with Henry Standing Bear, Little Debbie, Big Al(ice), Beau and Roy—sound asleep. 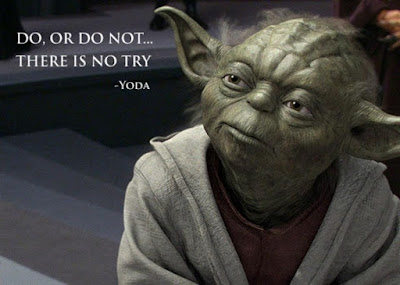 So as I finish writing this I do want to wish everyone a happy new year filled with happiness, love and peace.

Y'all have a great New Year and do keep on laughing!

P.S. "Gaby, I do plan to write you a note tomorrow, because I have the whole day off."
Posted by cousin nancy at 5:33 PM No comments: