Early this morning before Tony did his chores outside he and I went to Kerrville to eat breakfast at Randy and Lisa's Save Inn Restaurant. They make the best breakfast in town and to prove it, when we arrived their parking lot was nearly full and the restaurant was packed with happy people laughing inside. The reason that it is a happy place can be blamed on the sweet and funny waitresses and the good food. Not a bad combination if you ask me. And as always our breakfast was absolutely delicious.

After we left the Save Inn Restaurant we went to H.E.B. to get a few groceries and that is when things got a little weird and ugly. As Tony and I were walking to the store an old man probably about my age came walking out of the store nicely dressed but wearing shorts and it was twenty-nine degrees outside. Tony and I looked at each other and chuckled because we knew what each other was thinking—the guy was crazy.

When we arrived in the dairy section I just about had a cow when I saw an old woman probably about my age wearing just a sweatshirt and sneakers with rolled down black socks. We're talkin' no pants at all and the bottom of her dark blue sweatshirt just barely covered her bottom and she had varicose veins so bad her legs looked like a road map done by a drunk tattoo artists who had tried to connect all of her dots—it was not a pretty sight to see!

Everybody was staring at her and holding their breath as she casually lifted a quart of milk off of the shelf and then put it into her carry basket.  Tony and I looked at each other trying not to laugh and then we got out of there as fast as we could. As soon as we were three isles down and completely out of sight of her, near the frozen pizza section I said, "Tony, that woman wasn't wearing any pants! I can't believe it. Thank goodness the milk wasn't on a lower or higher shelf." Then we laughed all of the way to the bean isle.

When we got home at nine-thirty I helped Tony clean pens while he fed the dogs. Then I spent the rest of my day working on my book. Around four o'clock I went back into my office to try to find the picture I have of Molly Ivins and me because I want to put it into my book. After a ten minute search I found it along with a couple of hilarious pictures of me when I was young. They made me laugh out loud.

At four-thirty Kinky called to ask if he could come over so he could have a picnic with Toto. Ten minutes later Kinky was having a picnic on the front porch with Thunder, Little Girl, Hank and Toto. Here is picture that I took of the picnic. 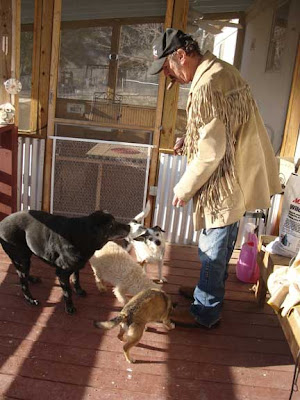 When the picnic was over and our dogs were full of fried chicken I showed Kinky the photos that I had found. He loved this one of Molly and me that was taken in 1999 while she and I were visiting backstage at our first Bonefit. 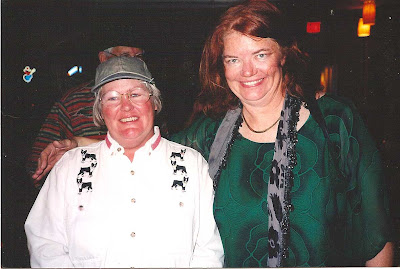 Then Kinky laughed out loud when I showed him this goofy picture of my sister Cindy and me on my parent's patio, when I was a sweet sixteen. We were working on a dance routine for the song "Well, I'm A Long Tall Texan." Cindy is wearing the hat and I'm pointing a fake pistol at her. 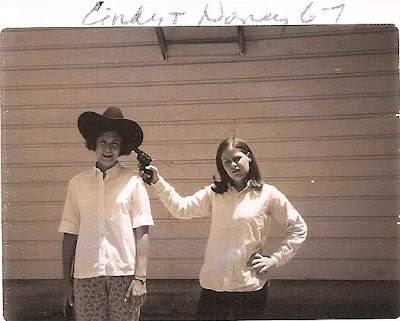 And Kinky nearly flipped out and then he started laughing when he saw me wearing a "Flip" hairdo at a party at my Uncle Howard's house. I was seventeen. My grandfather is the gray-haired man on the left standing by the door watching the man flirting with me. 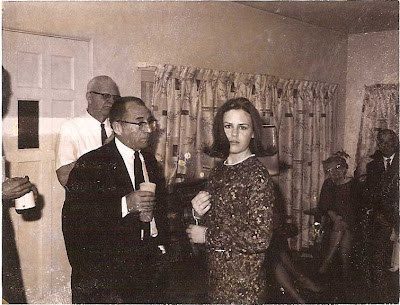 Well, I hope that my pictures made you laugh out loud because I am still laughing about them. The Grammy's are fixin' to come on so I must end tonight's blog. I've gotta feeling that the Black Eyed Peas will win everything tonight and I hope they will.
Y'all have a great evening!
Posted by cousin nancy at 6:54 PM

Great photos Nance, thanks for sharing!

I just love old photos...that ol' boy is really a lookin' at you...I'm sure I would be trying to beat pop's time. Are you sure that this old woman probably about my age didn't have any drawers on? pretty kinky stuff.

OH I love your shirt with the Boston Terriers on it.