Gosh, Time Sure Does Fly!

Yesterday I was very productive. I walked six miles, washed and dried a load of laundry, made Hank another hot meal, returned several phone calls and caught up with all of my paperwork, while my pinto beans simmered in the crock pot!

At twelve-thirty I served Tony and Ben Mexican cornbread with beans and like me, they loved it! Our lunch was a lot of fun, too because Ben was here and there was much laughter! We talked about everything and at one point our conversation went something like this:

"Ben, have you seen the documentary, The Voice?" I asked. "I saw Drew at H.E.B. the other day and he told me that I had to watch it, because it was incredibly great."

"We were standing in the dog food isle, and he started telling me about it when this wealthy looking, older woman showed up. I thought I was in her way so I moved my cart, and apologized to her for being in her way and she tells us that it was no problem, because she was actually eavesdropping on our conversation! Then Drew and I introduced ourselves to her. Her name was Virginia. Then Drew tells us all about the video. Virginia said she was going to rent it, and I should be getting it today in the mail from Netflix and I cannot wait to watch it! Drew said it was over three hours long."

"You'll like it, Nance. It's right up your alley, about plants talking, near death experiences, water, etc." Ben said, as I washed our lunch dishes in the sink.

When the kitchen was cleaned up, I went to my laptop and looked up one of my favorite desserts, Cousin Nancy's Afternoon Delight, the recipe that requires one can of Mountain Dew, Granny apples, crescent rolls, sugar, cinnamon and pecans. "Tony will you read me the instructions for this recipe, so I can make it?" Tone sat down at the kitchen table and began telling me how to make it.

After slicing up two apples and putting them into a pan of water so they could boil for ten minutes, I sat down at the kitchen table and started laughing. "Ben, you are not going to believe what I did yesterday?" Ben and T. started laughing even though they didn't know what was so funny. "A couple of days ago, I bought one of those battery operated nail grinders for our dogs nails. They are only about ten dollars. Well, I decided to test it out on me first, before using it on our dogs." Tony and Ben laughed harder. "I unscrewed the top, put the batteries into it, pulled off my pink Justin Gypsies boots, removed my socks and tried it on my toes, even though Tony warned me not to do it because it might hurt me. Ben, it was fantastic! I love it and because it is so low powered it did not cut me or anything! Can you believe that?" Ben didn't say anything because they were laughing so hard. "I bet it is the same thing that they use at the nail salons! I think everyone should use them." Then I went and got it and showed it to Ben. 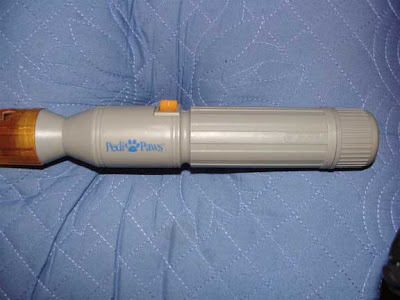 Finally, Ben quit laughing and said, "You've got to blog about this, Nance!" And, I told him that I would. Thirty minutes later we ate my dessert, then the guys went outside to work. This is what it looked like before we dug in. 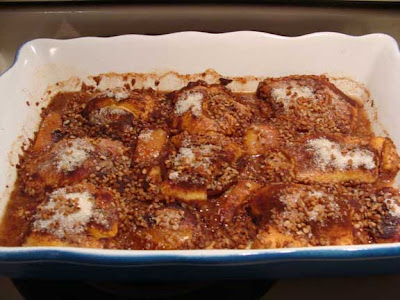 While they were outside working, I washed the dishes and then I decided to frame the poster that I had found a few days ago, and had completely forgotten about. Barnes & Noble, in San Antonio, had sent it to me after my book signing, back in 2006. It is gigantic and it took me a while to frame it, but I got it done. It is now hanging on the wall in my office. Here is a picture of it, before Tony helped me hang it. 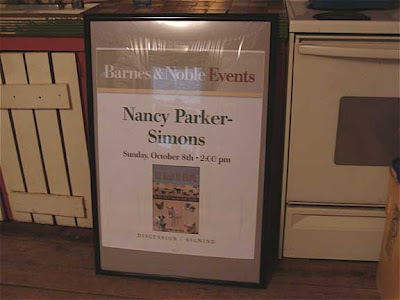 So, the reason that I didn't post a blog last night was because I watched, The Voice, and I loved it! Today I also didn't walk with Leslie because I was tired and I needed a day off.

Lunch today was fun, again, because Ben ate with us, again. First, we talked about our dogs and Ben came up with a great name for Dizzy, our new gigantic, but sweet, rescued black Lab. Her new name is Miss Moose or Moose, for short! It is perfect for her!

Tomorrow, we plan to move some dogs around, and put Nellybelle and Hank together. They have already met and seem to really like each other and all of us think it will be a great match! Hank has really turned around fast and is doing so great, I cannot believe that a week ago at this time, Tony and I were standing outside, over at the Medina Children's Home in twenty-two degree weather, trying to catch him using flour tortillas and cheese. Gosh, time sure does fly.

Y'all have a great evening!
Posted by cousin nancy at 8:49 PM

How does this nail thing work on dogs? I've considered buying one, but am always a little shy of that "as seen on TV" or, "but wait, there's more." I need a Consumer Report type evaluation on this wonderful "as seen on TV product", honest and unbiased. Try it out on Mr. Rogers and report back. I would love to see avideo of this fine tool in action! Hope it works.