This morning Lisa came out to walk our dogs with Matt, Don and Mike! After I had cooked up Hank's breakfast, which consisted of four scrambled eggs and a half pound of sausage cooked in olive oil and then topped off with a little cheese and a lot of garlic, I went outside to find Tony so he could serve Hank his special breakfast, but I couldn't find him. And, I am glad that I didn't find him!

When I walked up to Hank's pen Lisa was having a sweet conversation with Hank, basically telling him that he was loved and was going to be fine. "Good morning, Lisa!" I said, even though I felt bad for interrupting her. "Would you like to feed Hank his warm breakfast? I think it..." Before I could finish my sentence Lisa was inside the pen with Hank! I then handed her the pan of food, and then Don held the gate closed as I took this short video of Hank enjoying his home (trailer) cooked meal. Hank Eating Breakfast!

After Hank had eaten his breakfast, Lisa came out of the pen and she and I visited with Hank some more. He took turns licking our hands, and then he totally surprised us! He jumped up and leaned on the fence in front of Lisa! We were so excited, we decided to go into his pen and pet him. Hank seemed to enjoy the attention. About fifteen minutes later, he jumped up on Lisa and gave her a kiss as he wagged his tail! Then it was my turn! We were thrilled that Hank had jumped up on us even though we knew that it is considered a bad habit, but we encouraged him because he is making such great progress. When he gets back his confidence then we will start with his dog training and teach him not to jump up on people. 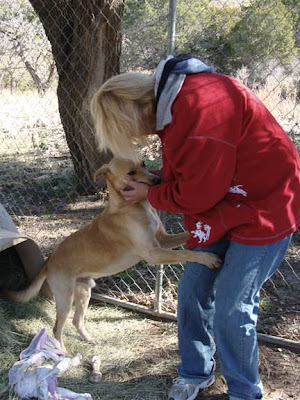 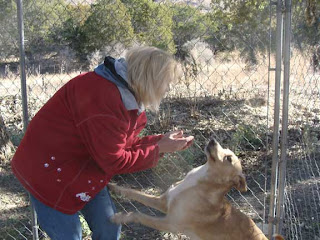 As Hank took turns jumping up on us while covering us with mud, I reached down and picked up his new toy that Rose had made for him and he jumped up and grabbed it from my hand and then he started shaking it back and forth! He was having so much fun! Then he and Lisa played tug-a-war and he was having a blast! His tail could not have been up any higher and wagging fast as he could wag it! Here is a short video of him playing with us and his toy. Hank Loves His Toy! And, this is picture of us covered in mud! 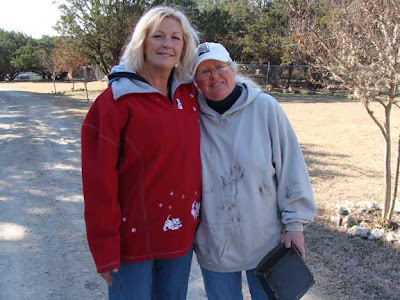 This afternoon Charlie Cooper, our good friend and neighbor, came by to bring us two of the cutest small doghouses! After handshakes and hugs, we went into the Space Ship and T. and I had a really fun visit with him! Charlie is a hard working man, highly intelligent and he has the greatest sense of humor. After he left I told Tony, "I love it when Charlie comes over to the rescue ranch, because every time he leaves I've learned something new! We're lucky him and Ellen are our friends. I just love them." Tony agreed with me and then he took off for his office to do some "much needed farm work." I wished him luck.

It is now twenty minutes past seven o'clock and the phone just rang— it was Kinky, so I took the call! Yeah, Kink is back at the ranch! When he asked me how Hank was doing, I told him about Hank's progress today and he was thrilled with my news! Then I told him about my good friends Garnet and Sandy who sent us a big check for our food drive. "Garnet wrote on her card that she really wants me to win our bet, so she can come over and watch you "walkin' the walk" with Leslie and me, and pickin' up poop with Tone!" Kinky laughed and thought it was very funny!  Before hanging up he asked me to please bring my laptop over in the morning so he can watch the videos on Hank, Mr. Rogers and Miss Dee and the rest of our dogs.

Tonight I am going to watch one of my Netflix movies and I can't decide on which one to watch. My two choices are: Jersey Girl and The Answer Man. I just flipped a coin and the winner is The Answer Man. I hope I like it.