Over The River and Through The Woods—Almost!

This morning after walking six miles, I cooked Hank a brunch, because I was running behind schedule. It was the same as yesterday's, sausage, eggs, cheese and garlic. When I reached Hank's pen with the warm pan of warm food, Tony came over and went into Hank's pen to serve him some more home (trailer) cooking.

While Hank ate Tony said, "Do you know that Hank got out of his pen earlier? Melody went in to clean his pen and Hank ran out."

"That is fantastic news! He must like it here." I said, wearing a smile as I looked at Hank enjoying his brunch. Then Lisa, Matt and Melody walked up to Hank's pen to join us. After hugs and greetings Melody told me that when Hank escaped he ran all around the rescue ranch and then he started playing with her as she tried to catch him. She said that he would get down on his front legs and then leap at her with his tail wagging high and non-stop! She told me that she caught him twice, but she didn't have a leash to put on him. Then she said that Hank then took off towards the gate, and quick-thinking Lisa took off and ran towards the barn to get some tortillas!

"I grabbed a couple of tortillas and then tore them up and threw them into his pen and called for him to come," Lisa said. "When he saw the flour tortillas he came running back and went straight into his pen to eat them! It was amazing! I love you, Hank. You are a great dog."

"This is so great!" I said. "Over The River And Through The Woods—Almost is what I am going to title tonight's blog. We've won him over! He likes it here! I love it! This means if he escapes, again he will come back like the others have." Then Tony picked up Hank's toy and began playing tug-a-war with him and Tone let him win. Hank was so happy and that made all of us happy! Thank you, Lisa, Matt and Melody for coming out and making my day!

Around one-fifteen "Dizzie" arrived! She is a four year old Black Lab that we rescued from an elderly couple, in their eighties, who no longer could keep her because they had both recently had some serious back surgeries. Like all Labs, she is a sweetheart, but today she was a little heartbroken when Manny drove away. As soon as the man had driven off, Tony said, as he stuffed her pillow into her doghouse, "She's going on a diet immediately. Nance, I've never seen a dog this fat!" I started laughing.

"Manny told me that she only goes outside to potty, and they fed her three times a day," I said. "She's great with kids, other dogs, is totally housebroken and obviously loves to eat. He told me she weighs one hundred and twenty five pounds. He said she was a real couch potato, too. I don't like her name, because it makes her sound like she is goofy or something, so I am going to rename her."

"What are you going to name her?"

"I'm not sure, yet. Maybe Tater Tot or Spudnik or Idaho. I don't know I've got to think about it some more."

After a late lunch Buttermilk took us to Kerrville to get some groceries. When we got home after four o'clock Carlton had taken ten messages for me. After listening to all of them, I went back to T.'s office and had a talk with Tony about a dog whose time had run out at the pound, while he was harvesting a crop. When our conversation ended, I came into the big room and called the pound in Kerrville. "Hello, this is Nancy at the rescue ranch..."

"We want to rescue Coda, the Malamute, that our friend Sheryl took to y'all, because she couldn't keep her anymore, if you haven't already euthanized her. We can pick her up tomorrow afternoon, if you still have her. Do you still have her?"

"Yes!" Danielle said. "Thank you so much! She is a beautiful dog!" When our conversation ended I went back to Tony's office to tell him the good news about Coda still being alive. "Tomorrow when we pick her up we need to take her to Hoegemeyers to get her spayed and all of her shots." Tony nodded his head, as he continued to plant some virtual strawberry seeds.

At five thirty-three the dogs started barking outside. "FedEx is coming in!" Tone half-hollered from his farm office. I ran outside to meet the driver! When he stopped his truck I thought that he had gotten out, so I went around to the driver's side but he wasn't there, so I walked around to the back of the truck and then he came around the other side and surprised me! We both started laughing about us running in circles around the truck,  then he gave me the box with Rick's calendar inside from the Apple Store.

"Tony come look at Rick's calendar! I love it!" I half-hollered down the hallway. One minute later Mr. Blue Jeans came into the kitchen to look at Rick's 2010 Utopia Calendar and he really liked it! So, I made him flip the pages so I could take a short video of it so I could show it to y'all. Then I called Rick to tell him that his one of a kind and the only Utopia Animal Rescue Ranch 2010 calendar on the planet, would be mailed out to him tomorrow. Rick was thrilled about it and he couldn't wait to get it! Here are two pictures that I took of the calendar. The second picture I took with the flash on and I think it turned out really cool. The Buddhapug seems to be enlightened! And, one of the pictures in Rick's calendar is going to be the artwork on the cover of my book, which hopefully will be coming out sooner than later. 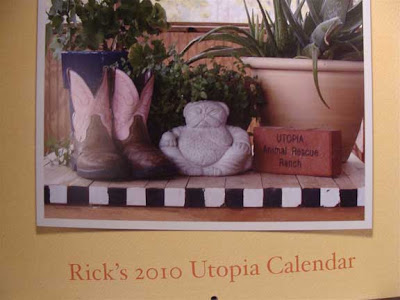 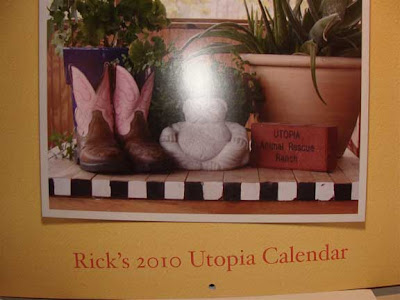 Around six o'clock I went over to the Lodge to show Kinky Rick's calendar and he was impressed. Then Ben showed up with his dogs, Valerie and Penny, because he is going to be working with us at the rescue ranch for the next two days. When I showed him the calendar he liked it, too! (Probably because he is in it with Ruth Buzzi.) While Ben was in the annex unpacking, Kinky challenged me to a game of pool. Near the end of the game, it was two to one, The Hummingbird Man had one ball left on the table and I had two. Then I won by default or should I say Kinky's fault, because he sunk the eight ball followed immediately by the cue ball! It's been a great day even though Mercury is still in retrograde!

Y'all have a great evening!
Posted by cousin nancy at 8:51 PM

I think Hanks last name should be Hill, as in King of the hill Hank in the TV cartoon.Both Hanks are from Texas and Hank has proven he can survive in the hills. Mary Really enjoyed Nancy's book and I'm about half way through it. I'm with Kinky, "laughing out of one eye and crying out the other" describes the emotional highs and lows Nancy will take you through. The next book to read is Kinky's, "Meanwhile Back At The Ranch".

I am so glad Hank is doing so well. It is amazing how attached I can get to dogs by just reading your blog! I agree that Hank should be Hank Hill! I emailed you a link to a site with doggie recipes. In case you didn't see it: http://www.party-photo-favors.com/dog_birthday_cake_recipes.htm
There are about 5 dog cake recipes. I think I'll make one later.

Love the Calendar, Let me know when I can buy one!

Hi Roger! Sorry, we do not have calendars for sale. I made the calendar for Rick only. We might do a calendar for next year if Trish at Copies Plus helps me, again. Thank you for the comment.

agreeing with roger, the calendar is greatly missed:)

What did you think of the cake recipes?

Anon, I will probably do a calendar for next year if Trish at Copies Plus helps me, again. The last one truly stressed me out, but now I can plan in advance. Thank you for the comment.