I Didn't Know About This Either!

Today has been great! I walked six miles with Leslie inside the trailer and then I decided to cook a fancy lunch for us. So I pulled out my old Fannie Farmer Cookbook and looked up the recipe for cheese souffle. I had made that recipe many years ago and remembered it being delicious, but I've never cooked it for Tone.

We had cheese souffle and vegetables for lunch and Tony loved Fannie's recipe! Here is a picture of the delicious cheese souffle when Tony pulled it out of the oven. 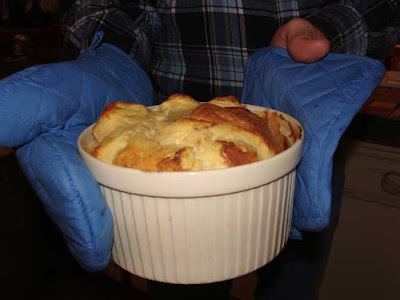 Even though today is our official day to be off, I ended up posting the iGive information on the blog, Facebook and sent it to Pat so she could post it on utopiarescue.com. Hopefully, it will help raise funds for the rescue ranch.

Late this afternoon around four-forty-five while I was backing up my computer the phone rang. "Rescue Ranch. Can I help you?" I said as Steve Martin sang King Tut in the background.

"Nancy, this is Phil! How are Tony and you?"

I didn't answer right off, because Phil sounded like a girl. "Phil?" I said.

"Not Phil! It's Carol! Your neighbor!" Then Carol and I started laughing.

"We want to come over there and see y'all. Is that okay?"

"That sounds great, Carol. Come on over! We'd love to see yall," I said even though I didn't know who 'we' was. After I hung up the phone, I half-hollered down the hall, "Tony! Carol just called and she's coming over to visit with either Lorri and Brenda or James. She said, "we want to come over" and I'll bet you it is James."

When our dogs started barking Tony and I went outside to greet Carol and James. They were smiling from ear to ear and after handshakes and hugs we came inside the trailer for a visit. "I have some great news to tell y'all," Carol said. "James has officially moved to Medina! He's a Medina resident!"

I was so happy for Carol and James. "Well, welcome to the neighborhood, James," I said. "I knew something was going on between y'all when y'all came over to visit us on December 23rd with Brenda and Lorri!"

Carol blushed and then she told us how it had all happened. Turns out they have known each other and been best friends for over seven years. James told us that he had been chasing her since the day he met her and they share the same interests including their love of horses, traveling and they are both Aquarians! In other words they are soul mates who fate finally put together. Tony and I were so thrilled for them. "And get this," Carol said, "when we go out to eat we always order the same thing and it's like we always know what the other one is thinking all of the time! We are just alike! His friends told him that I am a female version of him and my friends have told me that James is a male version of me!..."

There is much more to tell about Carol and James but my lips are sealed. All I can say is their courtship had Tony and me rolling on the floor with laughter. Here is a picture that James took of best friends horsing around: Brenda, Lorri and Carol when they were visiting Carol right before Christmas.

And this is a beautiful picture that Carol sent to me last month, of her and James with her dog and his horses that Lorri took. I think it is safe to say, we're definitely talkin' love, and I didn't know about this either until today! We love you, Carol and James and we are so happy for y'all! 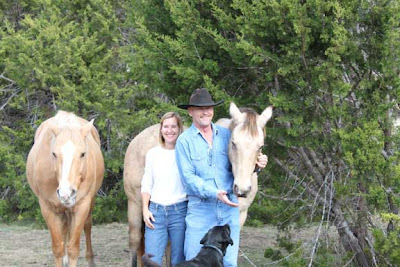 P.S. The last thing that I didn't know today, is Carol was the 'first chair' drummer all three years in junior high. I found this out when I asked her if she wanted to take the drum class with me. She declined because she already knows how to drum and she showed me how to hold the sticks without charging me a cent! And get this— I just received an email from my friend, Donna S.— she has just signed up for the drum course! Rump...a pump...pum!

Y'all have a great evening!
Posted by cousin nancy at 7:56 PM