Happy New Year! or Hairballs! or Trail of the Zeros! or Lacey!

Last year, 2017, was one of the very worse and one of the very best years for us and it was also exhausting and exhilarating. So not to go negative, on the very first day of this new year and on my first post, for 2018, I am not going to complain about the worse part of 2017, because thankfully it is all behind us now. And besides Tony and I have so much more to be thankful for.

I know that it has been over two weeks since I last wrote something for my blog, which is now a new record for me for going so long without blogging, and I still have the same old excuse I've used ever since June 22nd, the day when Tony and I were blessed and we became proud property owners with a very bright future to look forward to in our upcoming retirement.

So now I am going to highlight a few events, from the past two weeks, so I can start this new year on a positive note. But before I write another word there is one very sad, depressing thing that I must tell you. And my sad heartbreaking news is—Henry Standing Bear ate Carol's Top Bun.

Yes, I know you must be shocked to hear this tragic news, but not as shocked as I was when I caught Henry, ten days ago, heaving and trying to throw it up, over and over again, on the bathroom's tile floor.

Seriously, there was all of this different colored, wet, dog hair, with little chunks of green grass in it, scattered around in neat, little piles. And Henry had strands of dog hair stuck, in between his teeth, which made me start to gag when I saw it.

At first I was shocked as you can well imagine. Then I was sick to my stomach as I tried to clean up the multi-colored, multi-breed, clumps of hairballs that took me several times to flush it away.

Then I got mad and I was madder than a wet hen at Henry. Because so many of my dear friends, as far away as Canada (Fay), had collected and sent me their precious dog hair and I'd spent more than eight months washing it, then drying it in the salad spinner, then spinning it to weave together this cute, little bun, in time for me to give to Carol for her Christmas present. The Bottom   Line: I called Carol up and suggested that we not exchange presents this year and she was totally fine with it. And Henry only tossed up his cookies one more time for me to clean up and he eventually got rid of all of the hair that was wedged between his teeth.

Several days before Christmas I received, in the mail, the nicest gift from my friend Mary Sanders. She is and has been a loyal reader of my blog (when I do blog) for many years. Anyway, she sent us these pretty, crocheted cloths for me to use as potholders or dish rags as a housewarming gift and she also sent me a rare 1954, first edition of Roy Rogers: on the Trail of the Zeros. And I want to thank her for the thoughtful gifts. 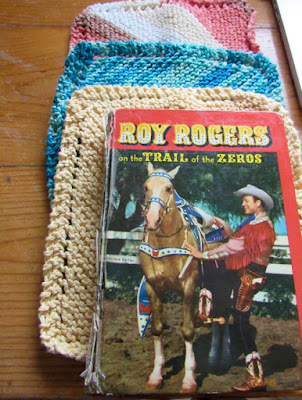 About ten days ago, after we had worked most of the day, over at the property, I announced to Tony that I thought it would be fun for me to spend the night at our new place. "...Tony, Henry can spend the night with me, too. It will be fun..."

Tony wasn't so sure about it and he suggested that I spend the night over there when the weather was better, because it was cold and drizzling outside and we don't have a phone installed yet. But I didn't listen to him even though later on I wished I had.

Anyway, before dark-thirty, Tony followed Henry and me, over to the property and he started a fire for me, in the wood burning stove, before adios-ing us.

At first Henry seemed to be a little confused to be over there and he was uncertain why Tony had left us there alone. So after sniffing around the cabin and checking out the commode Henry wanted to go outside to check some more things out. So I let him out the front door, because we had just fenced it in and I knew he would be safe from the nearby traffic. And I took these pictures of Henry's first time to be over at the property. 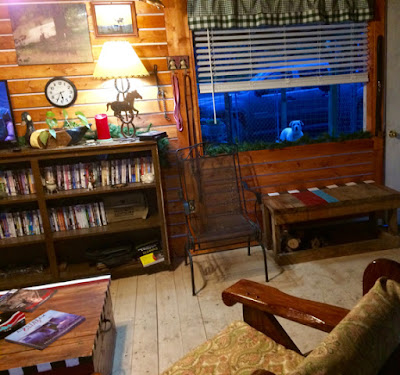 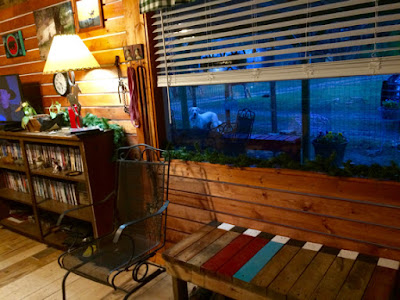 Within five minutes Henry was at the window staring back at me, because he was ready to come back inside for our slumber party—that never happened. 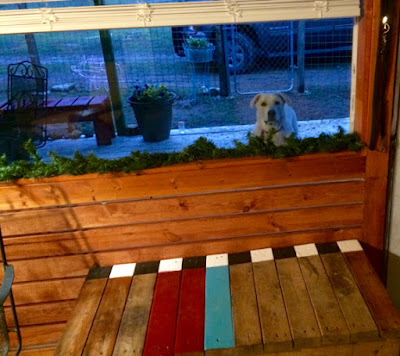 The Cabin was nearly as cold as the outside, so as we waited for the stove to warm up The Cabin, Henry and I decided to watch a movie—Pure Country.

As The Cabin began to warm up inside, Henry and I then decided to watch the movie City Slickers. When we finished watching that fun movie, neither one of us was tired, so we watched The Cowboy Way and then we watched Chef.

By then it was way past midnight, so I put another log on the fire, so to speak. Then I suggested to Henry that we go to bed. And Hen was all for it until he realized and then I realized that the single twin bed was way too small for us to sleep together. So after about twenty minutes of Henry jumping up and down/back and forth, on the twin beds, I gave up and suggested that we get up and watch another movie.

But Henry was tired and he looked confused as to why we were staying, over at The Cabin, instead of sleeping together over at the trailer. And I felt like he thought that he was being punished for something, so I calmly explained to him, "Hen, you are not being punished for eating Carol's Top Bun. I just thought it would be fun for us to spend the night together over here...."

With that said, Henry and I stayed up and watched the hilarious movie Starsky & Hutch. And halfway through that movie Henry tried several times to get up in my chair and sit on my lap, which was not fun for either of us.

So when we started watching the movie P.S. I Love You, I grabbed some blankets, out of the bedroom and Henry and I tried to snuggle together on the couch, but like the twin beds—there was not enough room for the both of us.

Bottom   Line: Henry and I stayed up all night and we came back home as soon as the sun rose. And the first thing I told Tony was, "I've got to redecorate the entire bedroom and get rid of the twin beds, because Henry and I couldn't even fit on one of them. I love the way the bedroom looks, but we need to put our queen-sized bed in there so I can sleep and also take naps with our dogs...." So here is one last look at the bedroom before The Queen arrives. 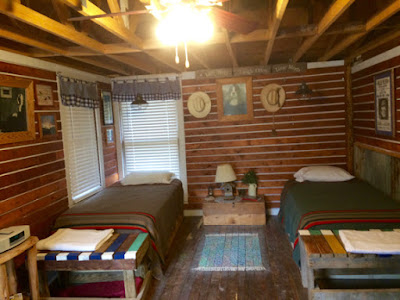 Yesterday, New Year's Eve, was a great day, because Wilma Flintstone was adopted to the nicest couple. Saturday afternoon Steve & Carolyn took Wilma home for a "slumber party" and yesterday morning Steve called me to tell me that they officially wanted to adopt her and to say the least Tony and I are more than thrilled for Wilma. And here is a picture that Carolyn sent to me of Wilma enjoying the good life. And her new name is Lacey. 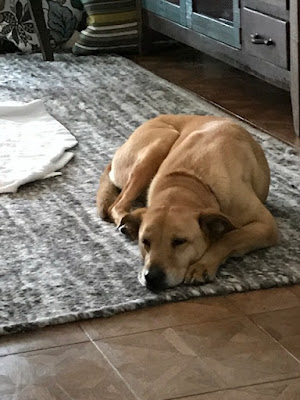 Y'all have a great New Year and keep on laughing!
Posted by cousin nancy at 7:24 PM 4 comments: