This morning I really overslept. I didn't wake up until eight o'clock! The reason that I overslept was because I didn't fall to sleep until after one o'clock, because I was thinking about Hank.

Last night, at eight-thirty-one, a little over an hour since I had posted Hank's Update, the phone rang and Tony answered it. Tony said, "Rescue ranch." Then twenty seconds later he said, "Thank you, Sherry." Sherry is our sweet neighbor from the ranch just beyond us. "Nance, that was Sherry. She just spotted Hank hunkered down in the weeds beside the road about twenty feet before Highway 16! Let's go!" We ran out the door, jumped into Buttermilk and took off!

When we got to our closed electric gate, it wouldn't open because the battery was dead, so Tony jumped out of Buttermilk, and opened it by hand. Then we took off, again! My heart was racing and so was Buttermilk! And, for the first time ever, I didn't ask Tone to slow down.

We slowed down to a crawl about a half mile before Highway 16, so we could look for Hank, but unfortunately we didn't find him, so when we reached 16 we turned around and drove back even slower looking and calling for Hank, but we couldn't find him. That's when I started to cry. Tony hates to see me cry, so after we had driven a mile, he turned Buttermilk around and once again we headed back towards Highway 16. Then right before we reached the highway I saw Hank in our headlights! "Tony there's Hank!" Hank had crossed 16 and was standing near the Medina Children's Home administration building. Tony crossed the highway and then stopped Buttermilk in the parking lot. Then he rolled down the windows and starting talking to Hank who was standing about five feet away. Hank didn't move even though we could tell that he was scared and hungry. Then it hit me! "Tony, we've got flour tortillas and cheese in the back! Remember I told you not to bring them in, because I knew they would keep in the cold weather."

Tony slowly got out of Buttermilk and walked to the back and opened up the hatch door, and pulled out some tortillas and a handful of grated sharp cheddar cheese. Then T. walked up close to Hank, who still hadn't moved, he held out his hand and offered him some cheese. Hank ate the cheese. Then Tony tore the tortillas into small pieces and began feeding them to Hank as he tried to put a leash on Hank. But every time that Tone attempted to catch him, Hank would back off and Tony would have to start all over, again trying to feed Hank. Even though it wasn't my hot cheese and garlic quesadillas, Hank couldn't get enough of the food.

After many attempts to catch Hank, Tony got frustrated, so I got out of Buttermilk and tried to leash him while I fed him, but I couldn't. Hank was a stray and street smart dog from San Antonio. While we were standing in the parking lot with Hank, house parents drove up to see what we were doing. "We're from the Utopia Animal Rescue Ranch. One of our dogs escaped and we are trying to catch him," I told them. They were so nice and even offered to help us, we thanked them, but we told them that too many people might scare him off.

I know that Tony and I looked like two crazy old people out there, because I was only wearing a sweat shirt and sweat pants and my pink crocs. I had forgotten to grab my coat. Tony was wearing a flannel shirt, jeans, and his blue jean jacket. I know that doesn't sound all that weird, but it is when it is twenty-two degrees outside! I was so cold I couldn't feel my hands or feet and I thought my ears were going to break and fall off of my head.

After spending an hour and a half feeding Hank and trying to catch him, we got into Buttermilk. Tony rolled up the windows and started the car to warm us up because we were both shivering. When I looked at Hank staring at us, who was standing only about five feet away I started crying, again, because we were so close, yet so far away. We were there with him and could reach out and pet him, but he wouldn't let us catch him and save his life.

Tony and I discussed what we should do next. We knew that we could not leave him there on the highway, and then Tony said, "Let's try to get him to follow us home, since he won't get into the car. I think he will." I agreed with T. even though I didn't think Hank would do it. Thank goodness I was wrong!

Tone started moving slowly and Hank followed behind Buttermilk. I turned around in the front seat and half-hollered, "We love you, Hank! You're doing great..." as Hank trotted behind Buttermilk. As we slowly crept along Hank stayed up with us! I was so happy and I couldn't believe that Hank was tailgating us!

When we came to the first cattle guard Hank stopped and he would not cross it, so Tony got out of Buttermilk and opened the side gate and Hank came through it! Then we took off, again. Tony and I took turns talking to Hank and encouraging him to follow us and he did until we got to the Echo Hill cattle guard. Tony got out of Buttermilk and opened up the gate to let him in and Hank entered the ranch. Then things got a little tricky.

Before we reached our turn off, Hank quit following us and seemed scared. I said, "Tony I want to get out here, so if Hank follows you into the rescue ranch I can close the gate behind him." I got out, Tony told Hank to follow him and I watched as Hank reluctantly followed Buttermilk into the rescue ranch. Then I closed our gate.

Tony drove up to the puppy pen that has a partial roof on it to prevent dogs from climbing and then he got out of Buttermilk to give Hank another tortilla. Fortunately, the pen was ready and waiting for Hank, because earlier that day, in hopes that Hank might return, I had placed water, dog food and quesadillas in it.

After Hank ate half of a flour tortilla and a little cheese Tony walked into the pen and acted like he was looking for something, then with his back intentionally turned away from Hank, which is the best way to catch a dog, Hank walked right in behind him and that's when I closed the gate! We had Hank! I was so happy I started crying, again, but this time they were tears of joy! As I cried Tony showed Hank his hay filled igloo dog house and petted him while praising him for being so brave. Then he walked out of the pen and locked Hank inside. Then we drove up to the trailer.

"Tone, don't turn Buttermilk off. I am going to get my camera and go back and take a picture of Hank in his pen." Here are two pictures I took of Hank last night: 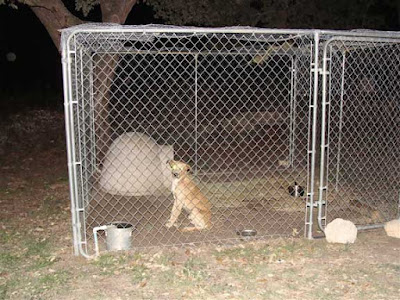 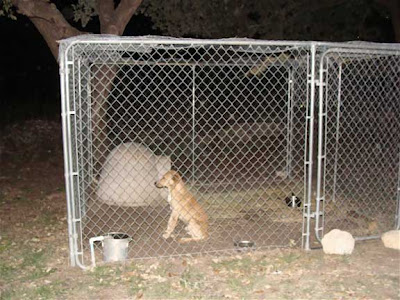 When I came inside the trailer I called Kinky to tell him the good news. It was ten thirty-two and twenty-one degrees outside. Kinky was thrilled with my news and he was so happy for Hank! "Kinky those were the longest two and a half miles. It took us thirty minutes..."

The reason that I couldn't fall to sleep last night was because I couldn't quit thinking about Hank and how thankful I was that he is now safe. Knock-on-wood. Here are two pictures I took of Hank-the-Wow Dog getting a little tender loving care today from Tony. 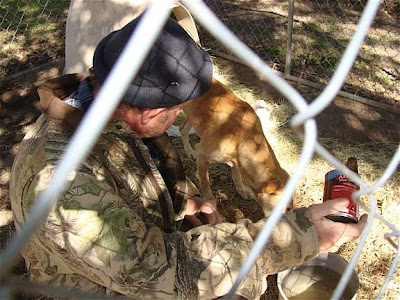 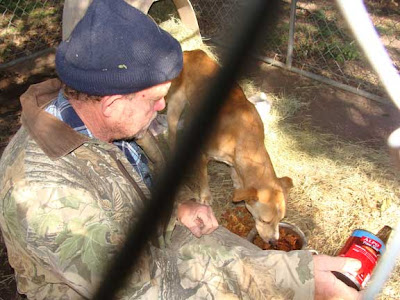 This afternoon Kinky came over to meet Hank. He gave him some special dog treats and Hank loved them! I can't wait to tell you about today! It has been fantastic! And, I helped Tone clean pens, today and repair broken water pipe! Thank y'all for your Hank prayers!

I am so happy that you found and rescued Hank--God bless you Cousin Nancy as you and Tony go above the call of duty to rescue these precious dogs like Hank.
You are all in my thoughts and prayers.Karen C.

Hi Karen! Thank you so much for your comment. It is our job and what Tony and I do, and we feel so privileged that we get to do what we can for the animals. It is so rewarding. Happy New Year to you. I hope that it is a great one for all of us.

Edited version: I hope that it is a great year for all of us. Take care, Karen and thank you for what you do for the animals. We are all in together.

I just got home, the first thing I did was get on the computer to see if you and Tony got Hank. Good job!
I am amazed that he followed you guys that far. I've thought about that little guy ever since he got away. He looks content sitting there.

Cousin Nancy, I am so happy this morning. I've been up here in cold and snowy Michigan thinking about Hank being lost and just feeling terrible. Thanks to you and to Tony for being just who you are. Now I can have a good Sunday! God Bless you all at the Rescue Ranch!

Good morning Roger and Jackie! I am so happy about Hank, too! Thank you for your comments.

great job nancy & tony,,i'e been out there with you in thoughts & prayers!!!
luv, Garner