That Tonight's Gonna Be A Good Night...!

I have my salt lamp turned on and am listening to the talented Black Eyed Peas singing I Gotta Feeling. I love that song because it makes me feel so good. I first heard them sing it on Oprah's premier show for her new season and it gave me goose bumps then as it does now. As I type this both of my feet are tapping nonstop to the beat and I am nearly dancing in my chair! I swear that song can lift anybodies spirit. It is amazing!

Susan Boyle has just started singing Wild Horses and she is giving me goose bumps, too. Now, since my feet are no longer tapping and I've quit swaying back and forth in the chair I'm ready to write a few words about my day.

This morning was great. I got up really early, did all of my chores and walked six miles with Leslie Sansone before nine o'clock. Lisa came out and she helped Tone with his daily chores outside, while I returned phone calls and caught up on my paperwork. Thank you, Lisa!

After lunch our good friend and volunteer, Paul Emerson, came out to deliver boxes filled with coupons for dog food, that his friend Stephanie had rounded up for us. Thank you Paul and Stephanie!

Right before Paul left the rescue ranch, Judith Pannebaker showed up, so she could meet Nellybelle and take her for a walk, because she is thinking about adopting her. Tony and I had a nice visit with her. During our visit she told us that she is the editor for the popular newspaper, the Bandera County Courier and she offered to help the rescue ranch however she could. When I told her that I write a daily blog about the going ons out here, she told me that she will check it out and will possibly pull some of my stories for the newspaper! 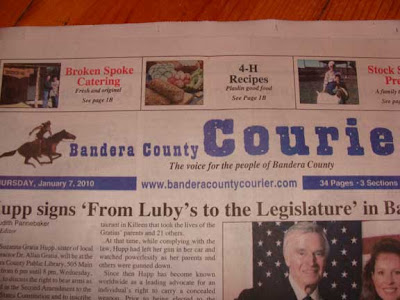 After Judith had walked the walk with Nellybelle, she told us that she loved Nellybelle and was really impressed with her. Then she wrote a check and made a donation to the rescue ranch. Then she showed us two of her adorable little dogs, waiting patiently for her in her car. When Tony and I saw them they stole our hearts immediately. They were both rescued dogs. Doc Holiday, a Pug mix, that had the cutest under bite and who was obviously a little clown who knew how to pull heartstrings, and Johnny Ringo had eyes that could melt your heart. I wish I had had my camera with me so I could show them to you.

I gave Judith a tour of the rescue ranch. When she met Toby Keith I told her his story and it made her mad about him being abandoned. Before leaving the rescue ranch she told me that she was going to tell a friend about Toby Keith and just maybe they might consider adopting him.

After Judith left, Tony and I jumped into Buttermilk and went north without knowing that things were fixin' to go south for us. We had several errands to run, so we went to Walmart first to buy dog food. There were some pretty weird acting people in there that we have never seen before and I am sure it is because of Mercury being in retrograde. The next two places we stopped at were even weirder. It was like people were out of sorts or something.

Our last stop, thank goodness was at Wolfmueller's Books to see Sandy and Jon! We arrived at four-thirty. They were fine and acting normal like they always do. Fortunately, Mercury had not found the location of their great bookstore, yet. And within thirty seconds the four of us were laughing out loud. Thank goodness they had lifted our mood!

After Sandy and Jon had told us about a really cool drum seat that their friend had just purchased next door at Hill Country Music  I said, "Y'all have got to excuse me for a minute because I need to run next door, to buy a drum pad and drum sticks for my drum class, before they close. I will be right back."

"I'll go with you!" Jon said. He and I left the building and went into the store next door. As soon as we walked inside Jon said, "Hi. Cousin Nancy needs to buy a drum pad and drum sticks because she is going to take drum lessons. Where are they?" The man pointed to the back of the store and he then followed us to the drum section and was very helpful. Thirty six dollars and seventy cents later we were back in the bookstore visiting with T. and Sandy. Ten minutes before Sandy and Jon closed their store for the day Tony and I said our goodbyes to them so we could get back to the ranch. This is what I purchased at the music store today. 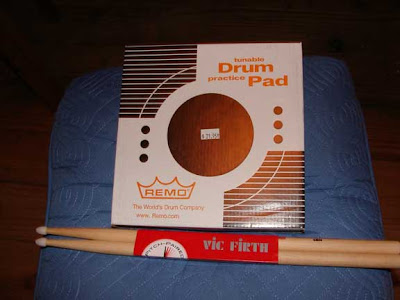 It is now nine twenty and I have to go to bed early so I can do the Harley Show live with Harley tomorrow morning, but before I do, I am going to take my drum sticks, drum pad, iPod and Bose iDock into the closet down the hall and play my drum with the Black Eyed Peas! I can't wait! I've got a feeling that I am going to enjoy it.

Y'all have a great evening!
Posted by cousin nancy at 9:21 PM