Today I walked six miles before Lisa and Paul came out to help Tony with his chores! Thank y'all so much!

Around twelve-fifteen, Russ and his mother arrived from San Antonio, to drop off Hank, a stray that they had rescued, but unfortunately could not keep. Monday, when Russ and I talked about Hank, he told me that he had started feeding some stray dogs in his neighborhood—then animal control showed up, because a neighbor had called them about the homeless dogs roaming the streets. The dogs were caught and then taken to the pound.

Russ had really bonded with Hank, so he went to the pound, found Hank and then paid the adoption fees and brought him home, then he called us. After hearing Hank's sad story, Russ told me that he would get him neutered, get the required shots, and anything else Hank needed, if we could take him. An offer that I couldn't refuse. I told Russ that we could take Hank since Chase and Lobo had found their forever homes.

This morning, Russ called to tell me that he had picked Hank up from the vet. "Nancy, he's been neutered, received all of his shots and tested for heart worms. The veterinarian told me that Hank was heart worm negative and he is as healthy as he can be. The vet told me that he was amazed that Hank was in such good shape considering his circumstances!"

When we met Hank he was scared and cowed down, because he has been through so much stress these past few days. His tail was tucked between his legs, his ears were down, and his brow was wrinkled, too. He let us pet him but he was nervous. I took a picture of him, but it was not a great picture because Hank wasn't happy. I told Russ that it was normal for Hank to be scared and that I hoped this afternoon after serving him some tasty cheese and garlic quesidillas, I would get a happier picture of Hank that I could post on my blog tonight. Well, that didn't happen, because when Tone and I went outside to feed our dogs their delicious warm quesidillas I had forgotten to take my camera with me. I am blaming it on Mercury in retrograde and old age.

I gave Hank his first piece of a quesidilla and he was hesitant to take it, but after he had chewed and swallowed it, he took one from Tony and then when I gave him another piece he grabbed it and his tail wagged slowly, but not high!

After we had given all of our rescued dogs their afternoon delight, south of the border treats, we went back to Hank's pen to give him the last two pieces and he happily devoured them! That dog loves Mexican food and the way I cook! I doubt if Julia Child ever bragged about that? I can't wait until tomorrow for Hank to meet Lisa and Matt and the rest of our great dog walking volunteers and to feel their love! And, I promise, tomorrow afternoon when we feed him some more of my quesidillas I will take pictures!

Right now Hank is under weight and his ribs are showing and I'm pretty sure that the quesidillas along with the love he gets from everyone, he will turn around real fast. Here is the sad picture that I took of him today before he went into his pen, and I can't wait to post a happier picture of him. He is a really sweet dog, about two years old and within the next few days, I promise that he is going to be the most adoptable dog out here! And when that happens his new name is going to be extended to 'Hank—The Wow Dog!' 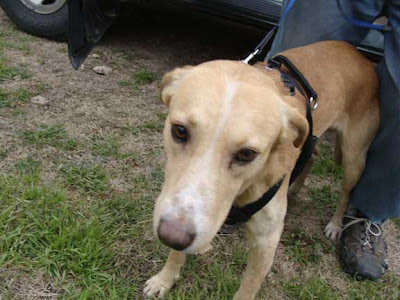 And now for the great news! Ben will be here tomorrow, along with Lisa and Matt and their friends! Yeah! And, Kinky and I are going to drive to Kerrville early in the morning to do the Harley Show live at 7:45 at The Rose 99.9! I hope that y'all can watch it! It should be a lot of fun!

And the best news today is I beat Kinky, aka The Hummingbird Man, in a game of pool earlier this evening! I had all of my balls still on the table except for one, when Kinky called the pocket and then sunk the eight ball followed by the cue ball! The Hummingbird Man - 0, Cousin Nancy - 1! I love it! I won by default, again!

Y'all have a great evening!
Posted by cousin nancy at 8:08 PM