It is four-thirty in the afternoon. My Himalayan salt lamp is glowing and Bruce Hornsby is singing The Valley Road. I am writing today's blog early because we are under a severe thunderstorms warning and tornado watch until ten o'clock tonight! Hopefully the storms and tornado will miss us, but just in case I have to unplug everything, I wanted to post this blog.

Yesterday morning around eleven o'clock Tony came inside the trailer and told me that Matt had gotten zapped, again but was fine because the voltage is so low.  So I went outside to tease Matt and to say hi to Lisa, Meghan and Steve. They were standing out by the barn. "Hi y'all!" I said. "Where is Matt-the-Ready-Kilowatt-Man? I heard he had another light (up-the) bulb moment this morning. Matt came out of the barn smiling and all of us laughed  and teased him about it. "Where did you get zapped this time?"

"Well, Miss Nancy," Matt said, "in Nellybelle and Hank's pen, again but this time I reached up and accidentally touched the wire with my hand. I'm fine. It happened because I was tired and it sort of jump started me."

Around four-thirty later in the day UPS arrived with my new Bose 10 iPod Docking System that I had ordered last week! When the friendly driver handed the big Bose box to Tone, Tony looked at me and said, "This thing weighs a ton, Nance! Are you sure you ordered the right thing?"

When he set it down on the chair so we could open it I looked at the box and said, "It says it only weighs twenty-three pounds. T. our portable Boses don't weigh more than five pounds each. Open it up." When Tony pulled the Bose out of the box it was huge—at least four times the size of our smaller Bose portables." Here's a picture of the big box that it came in. Tony plugged it in and then reluctantly placed it on top of our old entertainment center, "I hope it can handle the weight." Then he inserted my iPod and pushed play on the remote control and then he started slowly cranking up the volume. The sound was magnicently clear and I loved it, but I wasn't sure I wanted to keep it because there was no way that I could carry it around, and I thought it was overkill for our small kitchen and big room, so I asked T. to please put it back into the box because I was going to return it and get the smaller one like ours.

I had a lot of fun doing The Harley Show and visiting with Harley this morning! Dusty was his Pet of the Week. When I told Harley about me taking the beginners drum class at Club Ed he teased me about it. When I told him about Donna Schloss, Lisa and Sara signing up for the drum course with me, Harley teased me more and made me laugh. So I decided to tell him about my pink drumsticks that I am still decorating, painting my dull gray drum pad lavender, and secretly taking a free drum lesson online so I wouldn't make a fool out of myself when I attend the class.

After doing Harley's show, I called the Bose Corporation and spoke to Donna, a very friendly customer service woman. "Donna, I love the Bose 10 but it is gigantic. I am old and can barely lift the thing." Donna laughed and she told me that there was no problem about returning it, and she agreed with me about it being much bigger than the other Bose iDocks. After she gave me the instructions for returning it to Bose I thanked her and then started making breakfast.

At eight-fifteen before T. got back from Medina—the electricity went out, and it came back on eight minutes later when Tony walked inside the trailer. I wasn't surprised because he always lights up my life.

After lunch Buttermilk took us to Kerrville so I could ship the big, boxed up Bose back to Bose. It was raining when we parked two doors down from the UPS Store. Before I got out of Buttermilk I took these two pictures of Tony holding the Bose box. 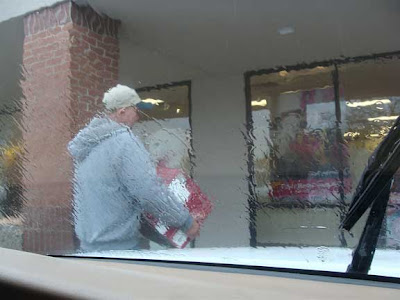 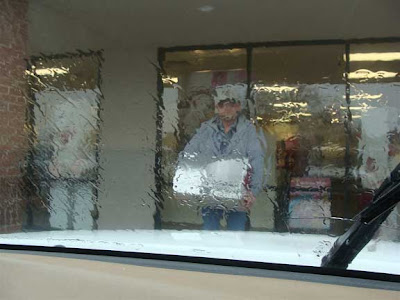 I laughed when I climbed out of Buttermilk because a man inside the Hallmark Cards store had been watching me and I am sure that he was wondering why I was taking pictures of Tony, so I waved to him. After we shipped the Bose back to Bose, we went to Wolfmueller's Books to see Sandy and Jon.
Unfortunatley, we didn't see Sandy but we had a fun visit with Jon. Right before we were fixin' to leave a friendly man walked into the bookstore and Jon immediately introduced us to his friend, David Jackson, the owner of Frontier Barber & Beauty Shop, and a band member of the popular band "Harry & The Hightones." David told us that he plays rhythm guitar and that no one in the band is actually named Harry. Then he invited us to come to the bands new CD release party this evening and this coming Saturday, next door at Hill Country Music! We told David we wished that we could make the release parties but told him that we would go next door and buy their new CD.
After David left, we left and went next door and purchased Harry & The Hightones - Hepcats From Smallville and we really like their music. Our favorite songs on the CD are: Juke Joint in Center Point and Big But Blonde.
It is now six minutes past six o'clock and it is raining outside. The predicted cold front with the high winds has not yet arrived—thank goodness.
Posted by cousin nancy at 6:07 PM

Here in Wichita we are supposed to get 5 to 8 inches of snow by morning and its 21 Degrees. Hope all you folks get is rain!