Stuck In A Pot Of Dirt!

Earlier today, I posted my latest video clip of Kinky playing fetch with Mr. Magoo. I was in a hurry to post it and I left out a few things. So, here goes!

Last night, I watched 'I Love Huckabees,' starring two of my favorite actors—Lily Tomlin and Dustin Hoffman! They were great in it, and I really enjoyed watching it.

This morning, after walking eight fast miles 'Sansone Style,' I've decided to cut back and just walk four or five miles a day from here on out, and every once in a while do an eight-miler. I made this decision, after I had showered this morning, after I got a sharp pain in my left ankle, when I was putting on my pink, Justin Gypsy cowboy boots! I don't want to injure myself, and then not be able to do my daily walks—and eight miles a day, just might be pushing it, at my age. And, the reason I always write about how many miles I walk each day, is because it helps me stay motivated, and makes me want to do more!

While I was over at Kinky's this morning, after shooting him and Gooie, we had a fun visit, right next to the Friedman Family Bone Orchard. Kinky could not wait to show me his Plumeria plant—it had two leaves on it, which it had sprouted since yesterday. I was somewhat jealous, because he had given me a Plumeria plant, and we had planted them at the same time. Mine still looks like one of Kinky's giant cigars—stuck in a pot of dirt—surrounded by a couple of friendly weeds. Here's a picture of mine. 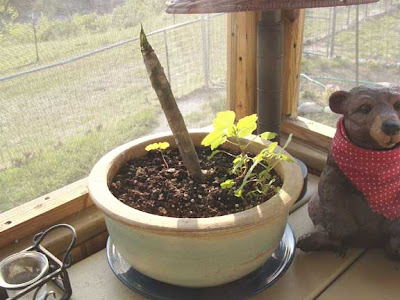 Before leaving the Lodge, Kinky invited Tone and me to join him for lunch in Kerrville. Fortunately, we didn't have that same old conversation about which restaurant. "Today's Wednesday, let's go to Del Norte, and eat their Mexican food buffet?"

I had no problem with that and said yes. Then we had that same old conversation about what time to meet. Kinky first suggested one o'clock. Then I suggested twelve-thirty, and then he suggested twelve-forty-five. We decided on one o'clock, by the time I jumped into Trigger, to leave.

Well, it was five till one, after we had parked Trigger, and gone inside the restaurant to find a table. Kinky showed up about ten minutes later. "Has Max gotten here, yet?" Kinky asked. T. and I shook our heads—no. "He said that he was going to try to make it."

A waitress then walks up to our table and says, "Hey, Kinky! You made the front page of the Kerrville Daily Times today! Congratulations!" Then she served us our drinks. Kinky knew about being on the front page from me. I had told him this morning, while over at the Lodge, because Beth had called me, early in the morning, and had told me about it, but she didn't tell me what the article was about. We were all clueless.

After the three of us had paid our bills, we went outside to buy a copy of today's paper, but the box was empty. As we headed for our vehicles, a man stepped outside and introduced himself to Kinky and then told him a funny story. Then another man came outside to meet Kinky, when his phone rang. "We're standing outside. Okay," Kinky said. Then the second man, shook hands with Kinky and then reminded him of how they had met years ago. Then Kinky started talking politics with them, and that's when Max appeared!

Tony and I started up a three-way conversation with Max, as Kinky continued his three-way political discussion. Sooner than later, the two gentlemen went back inside Del Norte, and the four us had an hilarious visit! Fifteen minutes later, Kinky and Mr. Green Jeans, Buttermilk and us, were headed back to the ranch, and Max took off in his anonymous auto.

I'm going to bed early, because I am doing Harley's show in the morning! Y'all have a great evening!
Posted by cousin nancy at 8:00 PM