It's Full Moon Time, again! This morning I woke up around four o'clock, and it was so bright outside—I didn't have to turn on any lights inside the trailer! Tony got up around five, and we went into Outer Space and drank some coffee, as we talked about my new book, and Tony's pictures that I want to use. I'm planning on using some of mine and some of his, and he is excited about it! I am seriously considering using Tony's picture of Bosco and Bunny—running, with the tire in their mouths, for the front cover. I love that picture so much!

By ten o'clock, I was caught up with returning phone calls, e-mails, and I had walked another four fast miles—twice! Yes, we're talking eight miles, again! Tomorrow I plan on just walking five miles—I don't want to over do it and I don't want T. upset with me.

I am sad to report, that Mr. Ziffle did not get adopted today, because the man was a 'no-show.' That was really disappointing, even though Mr. Ziffle didn't seem to care, because Todd and his wife, came out this morning, and they walked our dogs today! Thank you Mr. and Mrs.Todd! (I apologize for forgetting Todd's wife's name, but I can tell you that she was a really nice lady.)

Today, I washed my newly purchased, J.C. Penney's 'green-for-the-enviroment' waffle bath towels. They are fantastic towels, and require less dryer time, and I love their colors! Ours are off white, terra cotta and a pretty grayish-blue, and they are so soft! After folding them and putting them up, I removed all of our old towels—and donated them to the rescue ranch. We never seem to have enough towels for our dogs.

This evening, after it had cooled down to a melting ninety-three degrees, I went out to the garden with Tone. The plants are all thriving and growing faster than fast! I loved it!

Tony's potatoes, which are intentionally grown inside old, used tires, for recycling purposes—had grown another foot! Our Fairy Tale pumpkins are taking over the 'Pumpkin Patch!' And, Carol's grapevine has grown over four inches, since we planted it earlier this week! I can't wait for Kinky to see it tomorrow! Y'all have a great evening, even though we are under a full moon! 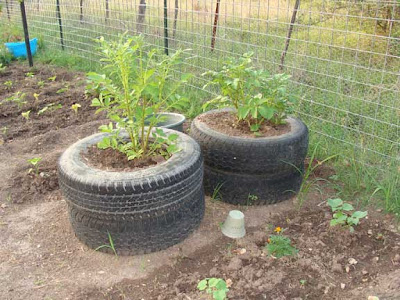 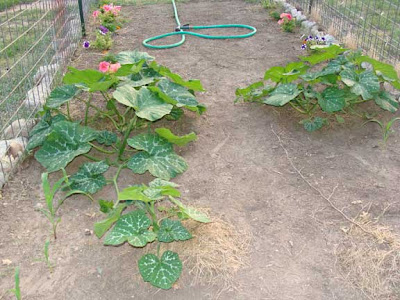 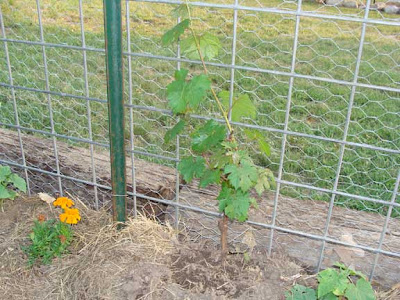 I love that picture of Bunny and Bosco too. Happy Mothers Day!

Love the garden and that is a great idea to use the tires for a planter.