Yesterday, my good friend, Garnet called me. She wanted to know if she, and her husband, Sandy, could come out today, with their granddaughter, Erin—to show them our rescue ranch, and to hand out dog biscuits. Of course, my answer was yes!

This morning around ten-fifteen, as I was finishing up my eight mile walk with Les—Garnet and Sandy arrived with their granddaughter! Tony went out to greet them, as I did the closing stretching exercises with Leslie. Then I jumped into the shower! Fifteen minutes later, I went out to my writing cabin, where they were visiting with Tony, to welcome them to the rescue ranch! I love Sandy and Garnet—they are good people!

After introductions, I invited everyone to go into Outer Space with Tone and me, so I could visit with them. "Erin is eleven years old, and she wants to be a veterinarian," Garnet bragged. "Her mom is a people doctor, and Erin wants to be an animal doctor!"

"Erin, that is fantastic!" I said. "Personally, I think Animals Rule and People Drool! Don't you?" Erin smiled. I had a great time visiting with Sandy and his better half, and there was much to laugh about. We talked about the joys of getting old, digital cameras, their dogs, the friends that we share, and the importance of backing up our computers regularly.

Sandy told me that after he had accidentally deleted, and lost some of Garnet's favorite pictures, and her Christmas card list with addresses—he now has three external hard drives, on his computer, and a flash drive—with all of Garnet's stuff on it—just in case! I couldn't help but laugh, because I know what it is like losing your Christmas card list! Been there, done that and I no longer send out cards.

While we visited, Erin played with our old timers, and our dogs were in love with her! Then Lucky meowed, and our dogs were history! He was on our porch, and Erin left Outer Space to go pet him. Luck-a-Luck is not much of a people person, and I was shocked when he let her pick him up, and carry him into Outer Space! And, I could tell that he really liked her and all of the attention that she was giving him. Erin Rocks, and she will definitely be a great vet someday soon!

After a fun visit, we went over to the Lodge, so Erin could meet Kinky, and get her picture taken with him, and Garnet could get him to sign her artwork. As always, Kinky was gracious, he signed the artwork, and then let them shoot him—several times! Then I shot all of them! I love shooting people! Here are a few of my better shots: 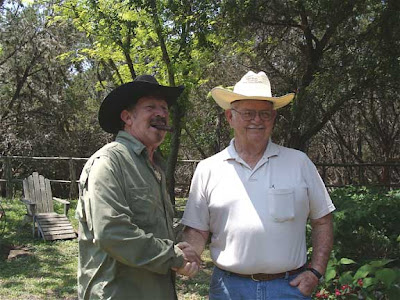 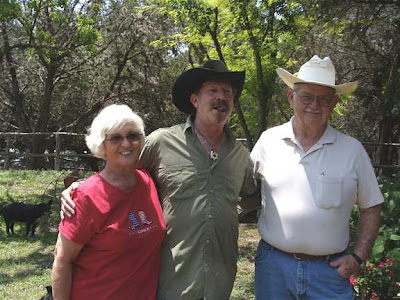 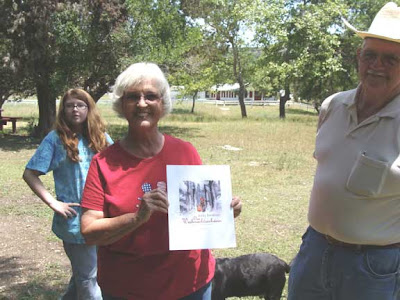 Y'all have a great evening!
Posted by cousin nancy at 6:58 PM