Today has been great! This morning I walked five fast miles with Leslie, and then I decided to try out, one of Carol's loaned Pilates DVDs, to see if i liked doing Pilates.

I paused the DVD, right after it started, because I realized that I needed a mat to sit or lay on. I don't have a mat, so I borrowed a blue, and a red mat from our dogs, since they never use them, because they always sleep on our chairs. I put them on the floor and then hit the play button—to continue my first Pilates workout! Here is a picture of my layout: 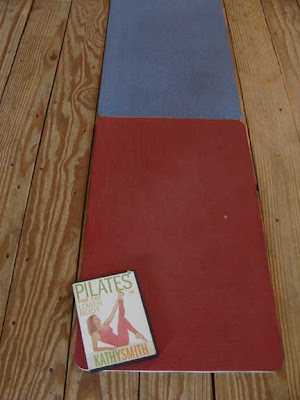 The instructor then introduces herself, and tells me what I am in for, for the next twenty-two minutes, and then she asks me to sit down on my mat(s) with her. So far—so good! As she is explaining some of the techniques and positions, my dogs jumped out of the chairs and started sniffing me—to make sure I was all right. Then I hear Kermit pull up outside, and looked out the window, while I was trying to make that 'C' position.

Tony and Aaron were getting out of Kermit, then I heard the gate open! Great, that's the last thing I needed to happen! I didn't want them walking in, and seeing me sprawled out on the floor. Why? Because, first off, Tone would think that I had died, from walking all of those miles, and then probably have a heart attack, right then and there, and secondly, I didn't want Aaron seeing me in my workout sweats. It was bad timing all around.

Fortunately, the guys didn't come inside the trailer—they went to the garden, instead! Trying to concentrate on my breathing, etc. was difficult for me, because suddenly I thought of a scorpion—attacking me, while I was down, and it terrified me! So, I grabbed the clicker—and clicked. I was done.

I know that Pilates is a great form of exercise, but unfortunately it is not for me. My dogs seemed relieved when i got up from the floor, because they went back to their chairs to nap, and I hit the shower.

I did paperwork most of the morning and returned some phone calls and e-mails. Carol had sent me two e's about what time we should leave to go the open house at Desiree and David Farrar's—Trail's End Guest House. After about five funny e-mail exhanges with her, we decided on 5:45! And that, will make us 'fashionably late!' I like that.

Around eleven-thirty, just as I had finished making lunch, Kinky showed up at the trailer! "Nance, I am fixin' to head out now..."

We visited for a few minutes, out on the porch, and then I invited him to join us for lunch.

"What's for lunch and how soon?"

"Sounds good," Kinky said, as he stepped inside the trailer, "I'll just have half of a sandwich. No soup. And it better be all organic," he teased. Kinky loves to tease me about eating organically.

Needless to say, Kinky loved his half sandwich, and he told me that it was really delicious. Then he excused himself, and headed out.

Before washing the dishes, I called Wolfmueller's Books. "Hi Jon, this is Nancy. Carol, Tony and I are going to the Trail's End party tonight and I was wondering if y'all were going to go?"

"No," Jon said. "We're going tomorrow night. We got an invitation from them, and they invited us for the twenty-first."

"What?" I asked. "I've got their invitation right here, and it says for May 20th—tonight. I guess they must be doing it, two nights in a row, because of so many people. Why don't y'all go tonight with us? David and Desiree told me that I could bring as many guests as I want. I'm sure that they wouldn't mind, if y'all came a day early." 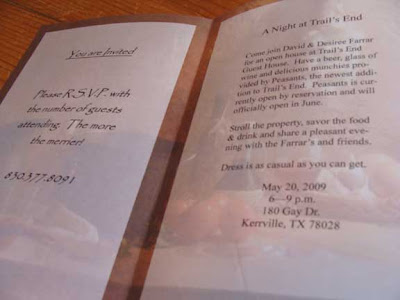 Two minutes later, the phone rang—the Caller I.D. showed it was Jon, so I picked up the handset. "Hi Jon. Are y'all going tonight?" All I heard was Jon—laughing!

"Yes, Nancy," Jon said, in between laughs. Sandy checked our invitation, and it is for tonight, too." Then we both started laughing!

"Thank goodness I called you, Jon," I said. "I can just see it now. You and Sandy showing up tomorrow night, at sixish, with Desiree and David being totally exhausted, from tonight's party, and them wondering why the heck y'all are standing on their front porch—ready to party!" Then we both started laughing, again.

"We decided to be fashionably late, so we should be there around six-fifteen. Carol, Tony and I can't wait to go see their place! I know that it will be lots of fun, too!"

I wrote this blog this afternoon, and scheduled it to post at 9:00 tonight, right about the time when Tony and I will be getting home and going to bed early, because i am doing the Harley Show in the morning. This is where the party was. I'll blog about the party tomorrow.

We're fixin' to have a wonderful evening with friends! Y'all have a great evening, too!
Posted by cousin nancy at 9:00 PM