This morning, I decided to not exercise today, because I have walked over twenty-four miles, in the last three days, with my friend, Leslie Sansone and her buddies. Actually, I don't know Leslie, but after spending so much time with her—I feel like I know her.

This morning, I went over to the Lodge to visit with Kinky, and he had lots to tell me. First off, he told me that the tickets for the June 13th Ranch Round Up—were selling faster than hot cakes, and he is really excited about it! I can't wait to hear the great legendary Ramblin' Jack Elliott and Jeff Jeff Walker perform! They are two of Texas' favorite songwriters and musicians! I really hope that y'all can make this event, because it is going to be one fantastic concert, and a lot of fun! I can't wait!

When I returned to the rescue ranch, I did some paperwork and returned phone calls. Then I entered an Ellen Degeneres contest online! I entered the contest for two reasons. One, because of what my fortune cookie had predicted about me fixin' to be real lucky, and secondly because I am trying to raise the money, that it is going to cost me to publish my book! I really hope that I win! Wouldn't that be too cool!

Right after I had officially entered the contest, the phone rang—it was Kinky! "Nance, what are you and Tony doing for lunch? I've got to go to Kerrville, soon."

"Kinky, we were going to eat here, but lunch sounds like fun!" I said. Then we got into a friendly argument. "Wait, you're not wanting us to eat at that Mexican food place? I'm sorry, but I will not eat there—ever again."

"How many times have you eaten there?"

"Two, too many," I answered, then we started laughing.

"Okay. We could eat at La Fours?" Kinky suggested.

"Sorry, they're closed on Mondays."

Kinky suggested two other restaurants, but I refused them both. "No Kinky, I don't care for their food, and the other place, because I don't like their waiter. He always tells us disgusting jokes, and then he invites himself to sit with us at our table, as we try to eat our meal and ignore him. Sorry."

"How about Luby's, Nance?" Kinky suggested. "Or do you have something against them, too?" Then he started laughing.

"That's fine with me. See you in a little while. Bye."

Tone then walks into the 'Big Room' and says, "I'm hungry. Where and when are we going to meet Kinky for lunch?"

I told him, as his stomach loudly growled at me. "Here eat a banana," I suggested. Then I wrote the previous blog, before leaving for Kerrville.

We were the first to get to Luby's, so we sat inside Trigger and listened to my iPod for a few minutes. Then we went inside and went through the serving line and then found us a table. I had just taken my first bite, when I saw Copper Love heading to our table. She put her purse down on a chair, and then she went to get her a plate of food, after we had said our hellos. Then Kinky arrived!

The four of us had a fun lunch—filled with laughter and many wisecracks! As soon as we were done eating, we paid our bills, and went outside for a short visit. Then it was time for us to depart. Here is a picture that I took inside Trigger, of Kinky and Mr. Green Jeans leaving the parking lot, followed by Copper and Ruby Tuesday! 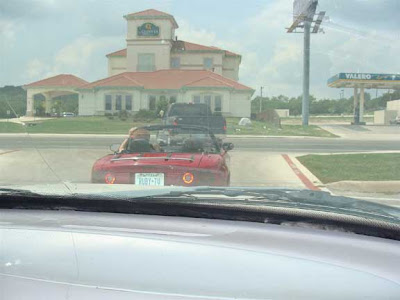 Tony and I then went to Walmart for a few items. I found some adorable placemats and bought two of them for Outer Space. One for our new cabinet and one for the bench between our two captain chairs—with the best view.

When we got home, after we unpacked Trigger, I took the placemats into Outer Space, and made a few changes. I really like my Buddhapug there—it's perfect! 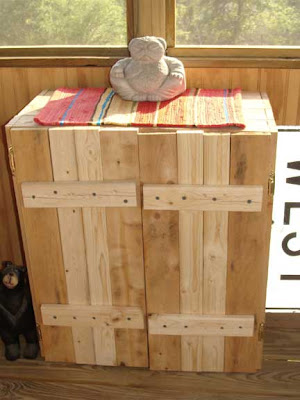 Y'all have a great evening!
Posted by cousin nancy at 6:31 PM

I love your new cabinet, I can almost smell that new wood all the way up here. Funny thing is, when I saw the photo, the Merle Haggard song "Swinging Doors" popped into my head.
You're putting me to shame with your walking Nance. I'm only doing 2 miles with Leslie! LOL!

Good morning Fay! I love our cabinet, too! That is great that you are doing two miles! If you will stick with it for thirty days—then you will be hooked on it! And, then one day, you will do the two miles and think, I can walk another two miles, and you will start the dvd over and do four! Keep walking and please keep me updated!