Today has been fantastic! I have much to tell, and I might have to make this another one of my 'To Be Continued...' blogs. Here goes!

This morning, I had walked five fast miles by nine o'clock! After I had showered, I did some paperwork, while my organic split pea soup simmered on the stovetop. I've never made split pea soup before, so I followed the directions very carefully. While it was cooking, I also boiled two chicken breasts, because I was going to make Tony my chicken salad recipe—that he loves.

An hour and a half later, I closed the lid on my laptop, and began preparing the chicken salad. Because the soup was ready to eat, I decided to use Jaws, my Vita-Mix machine, to speed things up. I cut up the chicken, celery, apple and tossed them into the blender, and then I added a half of a cup of cashews. Usually, I hand chop the celery and apple, but time was of the essence! I plugged in Jaws and flipped his switch to on. It took less than a minute to pulverize the ingredients!

When I removed the lid—I looked inside and was shocked at what I saw! The Vita-Mix machine had turned my chicken salad into a gooey mush! Nothing was recognizable! It looked like a vanilla milkshake—and I still hadn't added the Miracle Whip! And that's when Tony came into the kitchen. I wish that I could describe the look on his face, when he saw my mush. Let's just say that it was the opposite of the happy face. "Tony, I think the water in the celery caused this?"

Tony was disappointed, and really frowned when he watched me pour the mixture onto some bread slices. It was the only way he was going to be able to eat it. The only other way, was to pour it into a bowl, and serve it as chicken salad soup.

Tony reluctantly ate his runny sandwich, but he loved my soup, and so did I! As I cleaned up the dishes, I promised T. that I would hand chop the celery and the apple from here on out. He made me swear!

After lunch, I went over to the Lodge to visit with Kinky. We talked about business, the rescue ranch and self-publishing. When I was fixin to leave, he told me that a Judge was coming out soon, and he wanted to bring him over to the rescue ranch. I told him that was fine, and then Buttermilk and I came home.

After I had returned a couple of phone calls, I decided to take a short nap with my dogs. Toto, Hank, Little Girl hopped up on the bed, and then Thunder, our old black Lab walked into the bedroom with her tail wagging, even though she and I knew she couldn't jump on the bed. "Tony," I half hollered. "Can you come help me?"

"Could you please pick Thunder up and let her take a nap with us?" The next thing you know, Thunder is on the bed, wagging her tail, as she snuggled up to me and put her head on my pillow! "Thank you, Tony. I love you."

Ten minutes later, "Nance, Kinky is here," Tony said, as he carefully picked up Thunder and gently put her back on the floor, as the other dogs jumped off of our bed. I quickly put on my cap and wire-rimmed glasses, and then I went outside to the porch with Tony.

"Tony and Cousin Nancy," Kinky said. "This is Ira. He's a Judge." We shook hands with Ira, and then we invited everyone to go into Outer Space with us for a visit. I really liked Ira, and so did Tone. Ira is the second judge that I know. The other Judge is my dear friend, Jim Barden, who is a Judge in Hondo, Texas. He and his wife, BeBe, are two of my favorite people in Texas.

Judge Ira Uhrig, judges in the Whatcom County District Court—Bellingham, Washington! From what I've read, Bellingham is one of the top ten places to live in the U.S.! We had a fun visit, and before leaving the rescue ranch, I gave Ira a signed copy of my book, a calendar, and a couple of bumper stickers, and then we took some pictures. Here is a picture of Ira and Kinky after they came out of Outer Space: 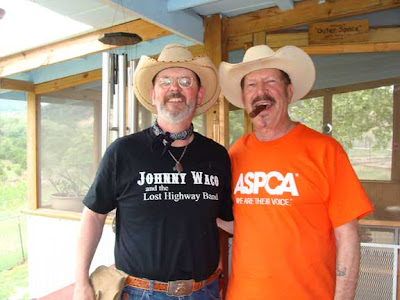 Before leaving, Ira promised us, that he would return to the rescue ranch in October, with his family, and I cannot wait to meet them!

A few hours later, I called Kinky and asked him if I could come over to take a few pictures. Five minutes later, I took these pictures of the Friedman Family Bone Orchard and one of his newest plants. Aren't they beautiful! 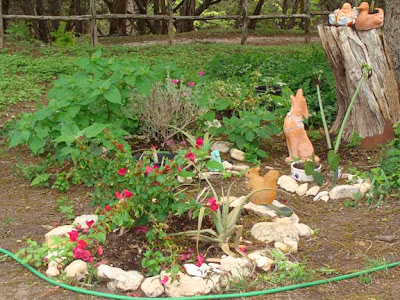 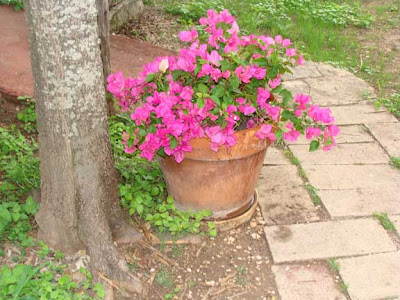 I also took a video of Kinky playing with Gooie, but for some reason, it didn't download, so I am going to have to retake it. Before leaving the Lodge, Kinky challenged me to another game of pool. The Hummingbird Man - 1, Cousin Nancy -0.

Early this evening, Carol came over, she needed to talk to us about some things. When she arrived—she was bearing gifts! She gave T. and I some delicious Costa Rican coffee and a grape plant—from a Texas vineyard! "I know that you've been wanting to make wine, Nancy—so here's your starter kit!" Carol said. "I bought one for myself, too! Let's start making some wine!" Then we went into Outer Space. Here is a picture of the plant, that started the first vineyard in Medina, Texas! "Cousin Nancy's Vineyard!" 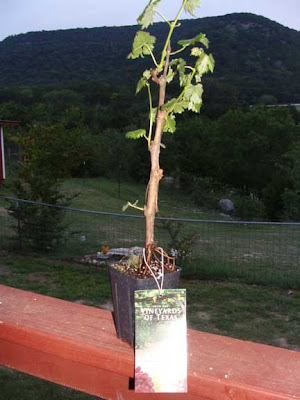 Nancy writes "Let's just say that it was the opposite of the happy face." That made me laugh out loud, thanks Nance!