Warning! This is another long one!

Tony and I arrived at the Cowboy Steak House, around a quarter till seven. Kinky was standing outside, talking to Rambam. We visited with them for a few minutes, and then the four of us went inside—to the bar, to visit with Sage and Dylan Ferrero, Copper Love, and to meet John Mankieiwicz!

After the handshakes, hugs and howdy doody's, I went back to the bar to visit with Copper. "Hello, Cousin Nancy," a woman said, sitting next to Copper. I knew the face, but I couldn't remember her name, then the man sitting next to the woman greeted me, too!

I said hello to them, and then Copper and I visited for a few minutes. Then I went back over to Tony, tugged on his sleeve and whispered, "Tony, who are those two people sitting next to Copper? They said hello to me, and I know we know them. And, they called me Cousin Nancy, too."

Tony looked over to see. "That's Randy and Lisa, Nance." I was so embarrassed! I love those two people. I then went back to where they were seated, and apologized to them for not recognizing them. They laughed about it, and we had a short visit.

Then John enters the bar, and Kinky introduces me to his friend, John! After handshakes, Kinky says, "John, Cousin Nancy is a writer, too, and she has a very popular blog, with a ton of fans."

"I know," John said. "I have read it." Oh my gosh! I couldn't believe my ears, and I was scared that my head was fixin' to swell, because this famous, great writer actually had read my blog! I was on cloud nine! I couldn't wait to tell Tone, so I took off!

"Tony! John Mankieiwicz has read my blog! He told me so! He was a writer for the popular television series, 'House,' during its first two years on the air! He has also written tons of articles for big named magazines, Playboy, Rolling Stone, and newspapers, etc.—that man knows how to write! I can't believe he has read my blog!" Tone was thrilled for me.

Then Abel, Rosie and Laura entered the bar, and there were more handshakes, hugs and howdy doody's. After a brief visit with them, Linda, another famous NoMad, enters the bar, and walks right up to T. and me, and catches us up on the NoMads latest dog agility victories! Then she left us, because she had to get back to work at the steak house. Then Kinky walks over to Tony and me.

"Nance, everyone has arrived. Linda told me that our table is ready. Would you and Tony go check it out in advance, while I roundup everybody?" Tony and I left the bar. Linda saw us, and showed us to our table.

Tony and I couldn't figure out where we should sit, so we finally sat down near the middle of the table—across from each other. In no time at all, everyone was seated at the table, and the fun began! The food was great, and so were the conversations!

My favorite part was listening to Kinky, John and Dylan talk about the past they had shared. They were backstage at 'The Last Waltz' concert at Winterland, and they told us some hilarious backstage stories, about their friends Mike Bloomfield, Eric Clapton, Van Morrison, Dr. John, Neil Young, etc.! I didn't want the evening to end, but unfortunately it did, and Trigger took Tony and me home.

This morning, I changed things up! While Aaron fed the dogs and cleaned their pens, Tony and I went to Randy and Lisa's Save Inn Restaurant for breakfast! And, yes it was delicious, too!

When we returned to the rescue ranch, I called Kinky to let him know we were back at the ranch, because John had wanted to come over to see our rescue ranch—he loves dogs, too! Needless to say—we gave him 'The Grand Tour!' John wanted to see our dogs first, so we took him to every pen to meet our dogs. He petted them and took many pictures of them. When he met David Beckham, our soccer playing wild hog, he must have shot him at least fifty times!

After the meet and greet with our dogs and pig, we took John into The Space Ship, and then went into Outer Space! Kinky and John swapped more old stories about their famous friends, and there was much laughter. Before they left, I gave John a tour of the trailer and my writing cabin! John liked them—especially my plastic garden tub!

After lunch, Kinky called to invite us to come over to the Lodge. "Nance, tell Tone, that last night, John beat me twice in pool. I want Tony to win back the title." Seven minutes later, Tony and I were at the Lodge—Copper, Sage and Dylan were there! "John," Kinky said. "I want you to play a game of pool with The Medina Bulldog."

Before the game commenced, John was given the pool playing name, 'The California Kid.' As John and Tony took turns sinking balls into the pockets, Copper and Kinky came up with a new name for John—The California Wussie, because of his finese with each of his shots. John liked it, and laughed, and then he added Mr. to his new moniker, and then sank the eight ball. Mr. California Wussie -1, Medina Bulldog -0.

After Tone's tragic loss, Kinky got out of his chair, went to the bookcase and grabbed something. "I want to give Mr. California Wussie a trophy for beating Tony and me in pool. Nance, grab your camera and let's all go outside for the award presentation." As we left the Lodge, everyone was laughing at the 'pool' trophy that Kinky had chosen.

Once outside, we decided to shoot a video of the event, for my blog. When everyone had taken their positions over by the Friedman Family Bone Orchard—I turned on the camera and the rest is history!

Before you watch the video clip, I need to tell you that John came to visit Kinky, because he is the writer for a new A & E television series—about Kinky's mystery novels! I can't wait for it to air! And, I wonder what actor is going to play the Kinkster! Here is a picture of John, after receiving his 'pool' trophy! I have posted 'The Pool Award' on the side bar and below, and I must apologize in advance for the shakiness in the video clip— I was laughing way too hard! 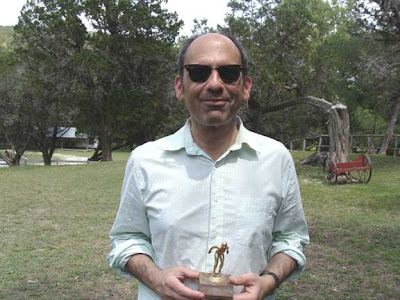 Happy Birthday, again Fay! Y'all have a great evening!
Posted by cousin nancy at 8:12 PM

Nancy, please let us know when these might be airing!! Can't wait to see them!

Nancy, Tony made me laugh out loud this morning when I watched that video... "No." That's classic. Sounds like you all had a great weekend. Me too!

Love A&E! Congratulations to Kinky it sounds awesome whatever the name will be.

Have a great week everybody!