Yes, it is true that we rescued David Beckham today—and he is adorable, but a little bit on the wild side! This morning around nine o'clock, my nephew Tom, Cindy's son, called the rescue ranch. "Nance, this is Tom. Nicki and I are on a ranch, over in Harper, with some friends..."

It was a sweet story about a little wild hog, that they had rescued, and they were wondering if we could help them out, because there was no way they could take the little pig to their rented house in Austin. "Tom, we can take the pig. We love pigs!" I heard cheers in the background. "When do y'all want to bring him out?"

At eleven-thirty, Tom, Nicki and their friend Brady arrived at the rescue ranch, with the cutest three month old, orange and black colored wild soon to be hog! Tony and I fell in love with him the minute we saw him! "Thank you so much Nance and Tony," Tom said. "He is really sweet and he loves to be petted. And get this—he loves our dogs and wants to play with them!"

As Tom carried the little fellow, we talked about what name we should give him. "On our drive over to here," Tom said. "We came up with Kevin Bacon and David Beckham." Then we all laughed.

"Those are great names, y'all!" I said. "I know who Kevin Bacon is, and I have heard of David Beckham, but I don't know who he is. Is he a movie star?" Everyone started laughing, but me. Then they quickly filled me in on who Beckham was. "I liked that Beckham was a famous good-looking, super soccer player, so I named this little cutie after David Beckham, and we are going to call him Beck—for short.

After playing with Beck, petting him and taking pictures, I invited Nicki, Brady and Tom to come into The Space Ship. And, of couse—they absolutely loved it! Then we went into Outer Space, and I showed off Tom and Ronnie's loving handywork! After a fun visit in Outer Space, we went inside the trailer, so I could show off our trailer to Brady. Brady thought our trailer was really cool—especially our beautiful bed—that T. made for us—when we got married ten years ago! Before leaving the trailer, Tony offered them some Nerd drinks, and they loved them, too!

After a short visit outside, it was time for them to return to Austin and they left—thanking us for helping them rescue Beck—before they left!

This afternoon, after completing Mari's and my four mile daily walk, I went outside to the pig pen, to visit with David Beckham some more. Y'all, I am in love with this little guy! He followed me around the pig pen, like a little puppy, wanting to be petted! And, at one point, he leaned into the front of my legs, and then layed down on my boots and went to sleep—which absolutely stole my heart!

I have posted a video that I took of him and it was not easy, because as I petted him, I had my left hand aiming the camera at him...it definitely won't get an academy award nomination, but I promise that you will fall in love— with the cutest little, wild wannabe hog, in the Texas Hill Country! I hope you enjoy the thirty-second clip! Here are a couple of pictures that I took of him. Y'all have a great evening! I'm fixing to watch Tom Selleck, on his new TV show—Jesse Stone!

P.S. Nicki I hope that I spelled your name correctly! 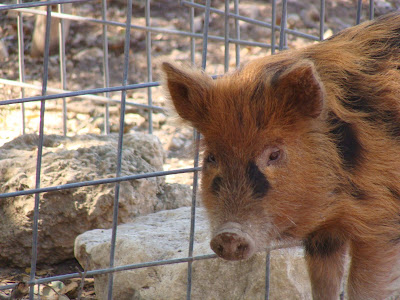 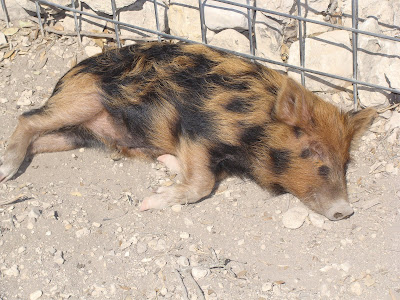 Awwww! He looks like he's black pig with racing flames drawn on him! What a cutie.