Today was a great day for me! This morning I did Leslie Sansone's 'Four Mile Fast Walk,' again! And, I loved it—it was great! And, after doing the four swifter than swift, twelve minute miles—I must admit that my hair was a mess, and I looked road hard, too! I highly recommend her walking tapes, because she is fun and personable. I plan to do it again tomorrow! That will make it day three!

This morning, Kinky came over for a visit, and to also see our resident, celebrity soccer ball, playing pig— Beckham! Beck was great, and he was glad to see the Kinkster! There was a lot of laughing, as we played with Beck!

Before leaving the rescue ranch, I told Kinky about Bella Vita, the new Italian restaurant in Kerrville and I recommended that he give it a try. Then Kinky took off through the woods and over the river—back to the Lodge.

Thirty minutes later, Buttermilk, Tone and I took off for Kerrville, to eat lunch and run some errands. We decided to eat at Bella Vita. When we pulled into the parking lot—we saw Mr. Green Jeans parked outside. Tony and I then decided to play a joke on Kinky!

When we walked inside, "Hi Cousin Nancy and Tony! Welcome to Bella Vita! How in the world are y'all doing?" Cat said! Cat is the woman who adopted Cher from us, a long time ago! "Howdy Cat!" We said. "Can we get one of Jessica's tables?"

"No. Sorry, Jessica has already gone, but Kinky is here. Do y'all want to sit with him?"

"Can we sit inside, right next to him?"

When Tony and I sat down at our table, with a french door separating Kinky from us—I tapped on the window. Kink looked over, and then he recognized us! He smiled and waved at us, as he was finishing off his dinner.

He nodded his head up and down, "Really good, Nance. The fish was excellent. Have y'all tried it?"

"Nope, but we will. Thanks for trying the new restaurant out. I told you that it was great. We'll see you back at the ranch in a little while." Kinky smiled and left the restaurant.

After we finished our delicious meals, T. and I ran two errands, and then we returned to the rescue ranch. When we walked into the trailer, I had seven new messages on the answering machine—five were from Kinky! "Nance, call me, etc...!"

I called Kinky. "Nance, George, the photographer is here, and he wants to come over to the rescue ranch, to shoot pictures for the cover of my new book—'Kinky's Celebrity Pet Files!' Can he and his camera crew come over there now?"

Five minutes later, George and his camera crew—Sara and Erin, all super nice people, were busy setting up their camera equipment, in front of our trailer, outside our front yard, for their photo shoot! It was pretty exciting!

While they were setting up, I called Kinky and asked him if I could come over to the Lodge, to visit with him, Little Jewford and Debora.

As always, I had a blast visiting with the three of them! Little Jewford is so dog-gone funny—he had all of us laughing our heads off—which was not a pretty sight,—but was a lot of fun! After visiting for over forty-five minutes, the four of us, went over the river and through the woods—for Kinky's photo shoot over here! Talk about fun!

As they shot Kinky, Little Jewford had us laughing, until there were tears in our eyes! I took a bunch of pictures of Kinky with his costume changes, but none of them turned out great, so I deleted them, but here are a couple of pictures I took, from our front porch, as George and his crew visited with Kinky! Y'all have a great evening! I'm going to bed early, because George, Erin and Sara are coming back over tomorrow morning at 8:30!

P.S. I am doing 'The Harley Show' tomorrow morning, but unfortunately we can't go to The Rose, 99.9 radio station. I hope that y'all will listen in at 7:45! 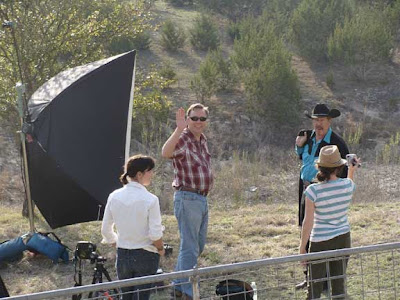 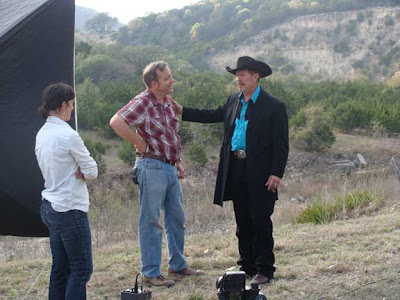 Nance, you've got me buying that walking DVD! Sounds like a great workout. Kinky's looking sharp. Can't wait for his latest book.

Hi Fay! The one and two mile DVD are great! You can do one mile, two miles, or mix it up and do three, four, etc.! They really are great walking videos and fun! Thanks for the comment and please keep me posted.

Dear Jimmie and Stephanie, I am so sorry to hear about Cosmo passing. Tony and I send you our love, and I will definitely let Kinky know about Cosmo. Please come visit us when y'all can.

Hello to my favorite Blogger! I'm thinking about trying the walking videos too....I'm getting kind of bored with just the Gazelle all the time! Love the pics in this post - Kinky looks just as handsome as ever! Hope you all have a great day out there in the beautiful hill country!