This afternoon, the phone rang, and I let my machine take the call. "Nancy, this is Carol. I was wondering if I could come out and meet Beckham. I can't wait to meet..."

"Hi Carol," I said, picking up the phone. "Oh my gosh, I would love for you to come over and meet Beck!" I said. "He is absolutely adorable! I am totally in love with him! This morning, Aaron put a dog halter on him and told us, "I never thought that I would fall in love with a pig—but I did—he's totally awesome!"

Five minutes later, Carol arrived at the rescue ranch! Tony and I were already in the pig pen playing with the cutest wild hog on the planet! As soon as Carol parked her truck, she jumped out and said, "OMG! Beckham is precious!" She then entered the pig pen and David ran up to her—to greet her! He stole and melted Carol's heart! "I love Beckham! He is absolutely adorable! I can't believe a wild hog can be so precious!"

"Carol watch this," Tony said, as I started filming Beck. Beckham started pushing his ball and then began playing soccer—pushing his ball all over the pig pen! It was hilarious! Please check out the sidebar, under Cousin Nancy's Video Clips! It is so funny!

After we played soccer with Beck, Carol went into Outer Space with us—for Happy Hour. While Carol was giving me her recipe for Tofu, Kinky called. While I was writing down her recipe, Tony went inside and returned Kink's phone call and invited him to come over and meet our super soccer playing pig.

Ten minutes later, Kinky arrived at the rescue ranch. K. fell in love with David Beckham at first sight! "Hi Carol, how are you?" he said. "Nance, I love Beckham! He is adorable!"

"I know Kinky," I said, with excitement! "He has stolen our hearts! Isn't he beautiful?" Then the four of us entered the pig pen and got to witness Beckham playing soccer with his ball!

"Kink," I said. "I am so in love with Beck—he's not going up for adoption—we're keeping him—he's going to be one of our official ranch mascots—like our donkeys—Roy, Gabby and Little Jewford! Okay?" Kinky totally agreed with me, as he played with our little hog-dog wannabe. Here are some pictures of Kinky meeting David Beckham and giving him some soccer coaching tips.

Animals never stop to amaze me—they are all incredible creatures. Pigs truly are as intelligent as dogs and full of love and joy and they deserve a better rap! I love them all so much! Y'all have a great evening! Beckham Rocks! 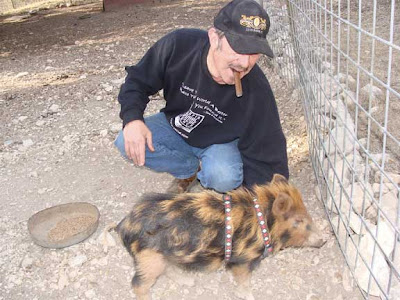 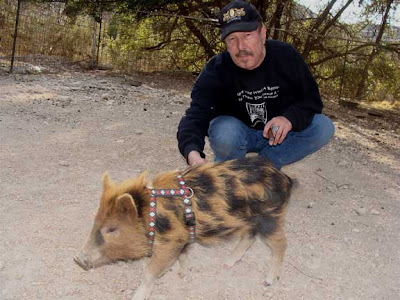 He is so precious, I just love his markings! Bend it like Beckham, wee pig!

Good morning Fay! I cannot wait for you to meet him! Beckham is like magic—the minute you see him—he puts a smile on your face!

Adorable...and that little pig is really cute too! ;)

Caught the Harley Show this morning...great to see you and Tony there!