I'm listening to the song, 'Young At Heart,' sung by the great, late Jimmy Durante. I love that song so much! It reminds me of simpler times, an age of innocence, when I was just a kid, who believed in fairy tales coming true—which I still do!

Last night I purposefully went to bed early—trying to adjust to the new time change. Unfortunately, it didn't do any good, because I woke up at 8:05—not a good way for me to start off my day. At 8:15 Tony walked inside the trailer, "Good morning, Nance," He said. "Where's breakfast?"

"I don't know, Tone—I overslept again. I haven't even fed our dogs or Lucky, yet," I said. "I think we need to seriously think about moving the rescue ranch to Arizona, because they don't do DST." Tony chuckled—I didn't. "Tony, I woke up at 7:05 this morning, but because of the time change—I woke up at 8:05. It's not fair and I don't like it. I've lost an hour!" Then Kinky called me about doing breakfast on Wednesday in Kerrville with him. I told him that we would.

Then I quickly fed our dogs and Lucky—I made our breakfast in record time! And, by 9:30, I had caught up with my lost hour, and started doing my two mile brisk walk at 9:30, as I always do! Thankfully it worked off my stress.

At eleven o'clock, a big white pickup drove into the rescue ranch. I was doing some paperwork, so Tony went outside to see who it was. Then he returned to our trailer, "Grace A. is here!"

Tony and I went outside to greet our good friend, Grace. After our howdies were said, Grace said, "I'm meeting Carol here, to show me the ropes on walking the dogs, and I have something to give y'all." Grace opened the door to her truck and pulled out the biggest orange thing that I have ever seen! "This is a pumpkin that we grew! It's called a Fairy Tale Pumpkin, from Spain, and it is absolutely delicious! Here." She then handed off her twenty-something-pounds of fairy tales to T.! Tony carefully carried it over to Trigger's tailgate, and set it down—we're talking big—it was so big it scared our dogs!

Tony and I thanked Grace for her and Dick's giant pumpkin donation, and then she told me how to cook it. I plan to bake it tomorrow! It is so big, it will take all day!

After that, Grace went into the Space Ship and then she went into Outer Space with us! Then Carol showed up and joined us in Outer Space! We had a blast!

After a fun visit in Outer Space, we decided to go see Beckham—Tone brought along some grapes for him, too! When the four of us entered Beckham's pen—Tony fed our soccer playing pig—grapes. Beck loved the grapes so much, he wasn't interested in playing soccer at all—he wanted grapes! So, after about twenty minutes, trying to get him to play soccer, we left Beck's pen.

I needed to get some paperwork done, so Carol went and got leashes and she and Grace walked many dogs for us! Thank you Carol and Grace—our dogs loved it and so do we! Here is a picture of our Fairy Tale Pumpkin! Y'all have a great evening! 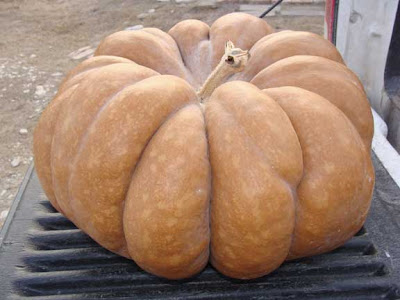 oh my gosh, that DOES look like a fairy tale pumpkin! A couple of fancy wheels on the side & a carriage underneath, you'll be flipping your glass slippers in no time Nance! ; ))
What an awesomecool pumpkin, I'll be curious to know how it turns out. Do bake it and freeze the remainder? Very cool!
Glad Beckham is doing well and enjoying his grapes. Too funny!

Nancy writes "...he wasn't interested in playing soccer at all—"

Awww,what you done to him?! LOL!

Nancy, I wanted to ask you: How big is he going to get? I know domesticated boars are really big, but what is the vet saying about him? He's just the cutest wee guy!

Howdy Fay! Beckham is going to be really, really big! We're talking 250-350 pounds! When Carol was out here yesterday, she noticed that he had grown and packed on a few pounds—probably from the grapes. I'm seriously thinking about taking him on daily walks around the ranch.

Today, I didn't get around to baking the biggest Fairy Tale, but hope to tomorrow—I'll keep you posted. Thanks for the comments!