This morning, I heated up some of Carol's homemade pumpkin bread and whipped up some smoothies. When Tony returned from Medina, I asked him to please try a slice of Carol's Fairy Tale Pumpkin Bread, even though he does not like pumpkin or believe in fairies. He said he would try a slice.

So, I spread Carol's Greek strained organic yogurt, onto our warm slices of pumpkin bread, (Carol had brought the yogurt along with her loaf, and recommended that we make sure and spread it on the top of our slices.) OMG! It was absolutely delicious! And, Tony loved it, too! In fact, when he sliced his third piece, I said, "Tony isn't that yogurt great with the bread? I was just reading the label, and it is low in calories and really good for us!"

"Nance," Tone said. "I think that you are wrong. This isn't yogurt—it's frosting. Carol just used the container." I thought about it and he was right.

"Great! I just ate a ton of that frosting, because I thought it was low calorie and nutritious yogurt, and now it looks like I am going to have to walk four to six miles today!" Tony laughed, and then drank the rest of his smoothie. "What do you think of the smoothie I made?"

"I like it," T. said. "What new ingredients did you put into it this morning?"

"Fairy Tale Pumpkin!" I said. After cleaning up the kitchen, I did my first two mile brisk walk—using my weights.

At ten o'clock, I was on the phone with Jon Wolfmueller. "Jon, last night when I was fixin' to go to bed, I went to the backdoor to bring Mama and Abbie inside, but they didn't come in! I panicked first, and then I woke Tony up! He got dressed, put on his boots, grabbed his giant flashlight, and then went outside to the backyard. Five minutes later, all three were back inside the trailer. Jon, you're not going to believe what they did! This morning, Tony goes out to the garden to check on it. When he comes back inside, he is madder than a wet hen, because Mama and Abbie had eaten all of his five to six inch broccoli plants!"

Jon laughed, and then he asked me if I could help him find the infamous Mari, of the NoMads, because he had lost her phone number. Then Tony walks inside the trailer to tell me that Jennifer B. and her family were here to adopt Fred Astaire! I told Jon that I needed to get off of the phone, and go outside for an adoption! We said our goodbyes.

I knew that Jennifer and her family were coming out this morning, because earlier in the week, she had called me about adopting Fred! They were in love with Fred and couldn't wait to meet him! She promised that they would be here at ten o'clock. So, earlier this morning, I had filled out his adoption papers, and was ready for the adoption!

I went outside to greet Jennifer and her family. Fred's tail was—just wagging in the rain! The B.'s had brought their son, Michael, and Rebecca of Sunnybrook Farm, who they had adopted from us a while back, to make sure that Fred and Rebecca would get along. Rebecca is a 'smiler' and she grinned, when she saw me! In fact, she wouldn't quit grinning! She was happy and she looked great!

As Jennifer filled out Fred's adoption form, Tone and I visited with the B. family, and laughed as we watched best friends—Michael, Rebecca and Fred playing! These were great people and I was so glad they were giving Fred his forever home with Rebecca!

It is nearly eleven-forty, I am fixing to sign up on Facebook, as Aaron and Todd are outside, taking our dogs for their walks. I plan to walk another two miles around one o'clock—wish me luck! Here are a couple of pictures of Fred with his new family! Y'all have a great afternoon! 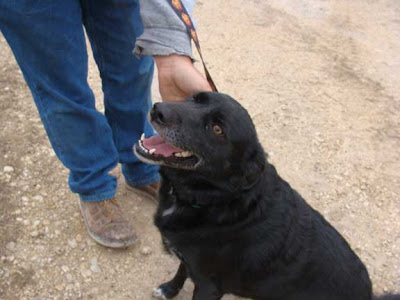 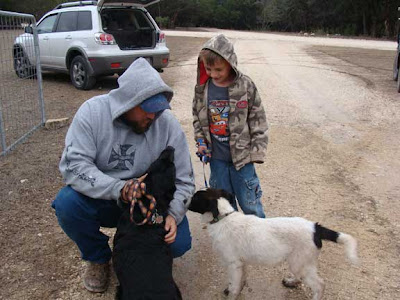 I just love your adoption stories Nance. They're really heartwarming and wonderful. It's so nice to know the wee dogs are going to a home that loves them. Very, very sweet.

Hi Nancy. So happy to hear that Fred got adopted. I am glad I got to walk him last week, he is such a little sweetheart!

See you all next week.