I Have One Friend!

I believe in signs! I'm not talking about the red colored 'Stop' signs or the yellow 'Watch for Water' signs. I obey those. I believe in astrological signs, but what I am talking about tonight are cosmic signs. The kind of signs that are sent to us, pointing—us into another direction to take—or what I like to call, 'The Heavy Heavenly Hints' made to get our attention!

Two weeks ago, when Ben was down here working, he told us that he had signed up with Facebook, and was having fun with it! He told us that he was just learning all of the ropes, but he was really enjoying it.

Last week, when Ben was down here working, he told us that he loved Facebook! He went on to tell us about all of these old friends that he had reconnected with, etc. I thought it sounded pretty cool, but didn't have a clue as to what Facebook was about.

Then this morning, when I checked my e-mail. I had two new e-mails. The first e was from a friend, announcing that he had joined Facebook, and he invited me to checkout his Facebookt, join it, and be one of his friends.

Then my second e-mail was from my good friend, Fay, up in Canada, asking me to please post this note, because Dwight Yoakam had just joined Facebook, and wanted to let his fans know about it. I love Dwight and he has done so much to help our rescue ranch—I had no problem posting this note:

DYs management is committed to keeping his Facebook up-to-date with news about his music, movie and concerts, here’s what they’re saying: “We will be using the fan page as our primary Facebook spot for Dwight, but first, we have to get everyone over there!!!!”. For those of you who are active on Facebook, and have lots of Facebook Friends, you are cordially invited to join Dwight’s Facebook, here’s the direct link: http//www.facebook.com/pages/Dwight-Yoakam/7178551770?sid=1dda391e3ca80c8c17caecc1e98b1555&ref=s

If you are so inclined, please send a message to each one of your friends by going under "compose new message" and invite them to join DY's FAN page by giving them the link. You may be able to add all of your friends with the stroke of ONE key if you put them on one "friends” list.

There’s also his online Fan Club, which will remain "the" spot for perks you can't get on those public pages… exclusive photos, videos, info, contests, meet & greets with Dwight, etc. etc. Check it out on www.Route23Club.com and join today!

This afternoon, after spending thirty minutes over at the Lodge, trying to help Kinky build a fire, in his fireplace—using wet wood—we finally had a fire blazing, and it was burning full steam, too! After completing that project— Trigger returned me safely to the rescue ranch!

When I walked into the trailer, Oprah was on—talking to the founder of Facebook! What another Facebook deal? I sat down and watched her show. Near the end of her segment with this young man—Carol called. I confess, I let the machine take her call, so I could finish watching the deal about Facebook.

As Oprah talked—Carol talked. "Nancy, this is Carol. I was wondering if I could come over there—I have something really big for y'all!"

As soon as Oprah was done talking—I called Carol. "Carol, we're here, we would love for you to come over! Did you just see the deal on Oprah about Facebook?"

"I know! Tony watched it with me, and he is signing up on Facebook—right now! I'm going to sign up, too! Give me five minutes, so I can go down and open up our gate. Bye!"

Ten minutes later, Carol was inside our trailer, with her special delivery, and within minutes, we were all laughing! A few minutes later, Tony announced, "I'm now a member of Facebook!" Carol and I went over to his laptop and took a look.

"I want to be on Facebook, too!" Carol announced. "Let's check it out! Do you know anyone on Facebook?"

"Ben is," Tony and I answered. "Carol, you're welcome to get on Facebook using my laptop," I said. Carol pulled up a chair, sat down and went to Facebook!

Carol had to sign up on Facebook, and then she tried to find Ben! We didn't know how to find him, and Carol kept coming up blank, so I called Ben. "Hi Ben, it's Nancy..." Then I put Carol on the phone with Ben. A few minutes later, Carol passed Ben off to me. "Ben, I am putting you on speaker phone now, okay?"

Within minutes, Carol was a friend on Ben's Facebook! Then they started instant messaging each other, and it was totally hilarious! Then Carol starts laughing out loud and says, "Look! It says that I have one friend!" We burst out laughing! T. and C. were hooked!

I plan to sign up on Facebook tomorrow. Facebook was definitely a sign for me! It has been too much in my face! Y'all have a great evening! Here are a couple of pictures I took of them addicted to Facebook. The first one is of Tony and Carol and the second picture is Carol on the speaker phone with Ben: 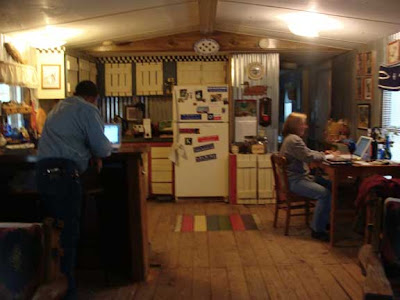 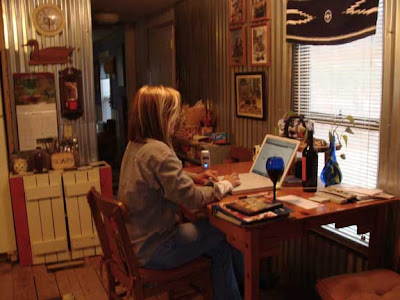 Wow, that is really incredible Nance, what synergy! I love when the cosmos comes together like that. Cool, huh?

Thanks for blogging about Dwight Yoakam's Facebook, everybody should definitely check it out and add him!