Sorry for being a blog slacker, a lot has been going on here—so now I am playing catch up. Here goes!

Last Friday, while Beckham was at the vet getting neutered, our great volunteer, Jim, came out and walked many of our dogs! Thank you, Jim!

Later, in the afternoon, Annie H., a good friend of my sister, and a member, in the same book club, as my sister Cindy, arrived with her husband, Regan, and their friends Cathy and John—from Austin! Annie had made an appointment earlier in the week, to come out, because their good friends, Cathy and John, had lost their dog, from old age, months ago, and they were now ready to adopt another dog. Annie had talked them into coming here, so they came! When they arrived Tony and I started the tour of the pens—on the east side first.

They stopped and petted every dog, as we told them each dog's story. After they had met Nash (aka Ghost Dog) and his roommate Alfie—we went to the last pen—the puppy pen, where K.K., Hannah Montana, and Linda T. were. (we named Linda T. in honor of our great dog walker—Linda T.!) After introducing them to the little ones, Cathy smiled and said, "I'm in love with K.K.! I think she's the one!" Then we told her K.K.'s story, and then she and John talked about it, as we crossed the road to show them the dogs on the west side of the rescue ranch.

First, we went to Beckham's pen and went inside. Beck was sleeping inside his 'hog—dog house' but came out when we called his name. He was still a little groggy from his surgery, earlier that morning, but he perked up, when we fed him some grapes! While we petted Beck, John said, "Cathy, I really like that dog over there." Then he pointed at the dogs behind Beck's pen.

"That's Lucy and Daisy," I said. "The darker one is Daisy, and the lighter one is Lucy. They are great dogs, too and they haven't been here very long. Two weeks—I think?" Then we left Beckham's miniature soccer field, to show them Lucy and Daisy and the rest of our dogs.

After showing them all of the dogs, they decided to adopt—K.K.! Yeah! I then invited them up to the trailer to give them 'the grand tour'—which includes taking them into the Space Ship, going into Outer Space, and to also come inside our trailer. I think they were pretty impressed!

After the adoption papers were signed, we left Outer Space, and they followed us, as Kermit took us to K.K.'s pen! Tony leashed K.K. and then carried her out of her pen, and then handed her off to Cathy. After hugs and handshakes, K.K.'s party of four left for Austin—after making a quick 'pit stop' after leaving the rescue ranch!

Saturday morning was great! Carol, Todd and Linda T. showed up to walk our dogs! I love these people that walk our dogs for us—including Jim, June, Ellen, Aaron, Kim, Katherine, Joe, Sasha, Jack, Rebecca and Ken! And, I am proud to say that all of our dogs got walked and had so much fun!

Saturday afternoon, at 2:30, Tony and I took off for Kerrville, so we could go to Robert Earl Keen's book signing at Wolfmuellers! When we arrived, the book store was packed full of people wanting to get their Robert Earl books signed!

Our good friend, Carol V. arrived right behind us, and we had fun visiting with our friends, Liz and Jim Cravotta, Dusty and Martha Pendleton, Jon and Sandy and Kinky! At one point, Carol, Tony and I went and jumped into the line, to get our Robert Earl books signed! When it was Tony's and my turn, I handed Carol my camera and asked her to shoot Tony, Robert Earl and me!

Just before Carol took our picture, I held up my hand, placing two fingers behind REK's head! Carol laughed and took the picture! She told REK about what I had done and he laughed, as he signed his/our book.

Tony has just called Carol about some Spanish CDs, and she just asked Tone, "When is Nancy going to update her blog? I can't wait to see that picture I took of her and Robert Earl!"

"T. tell Carol—that I am blogging right now and she is in it! I will be posting it real soon." Unfortunately, I am not going to post the funny picture of me and Robert Earl—because I look fat—so I deleted it! Sorry Carol, but thank you for taking the picture.

This afternoon, Tony and I went over to visit, our good friends, Liz and Jim Cravotta and we had a blast, visiting with them in their famous, authentic 1880's 'Grey Goose Saloon!' We had invited Carol to go with us, but she couldn't because she had two incoming rescue cats to deal with!

Well, I am nearly caught up now. Here are a couple of pictures of the famous Grey Goose Saloon! Y'all have a great evening! 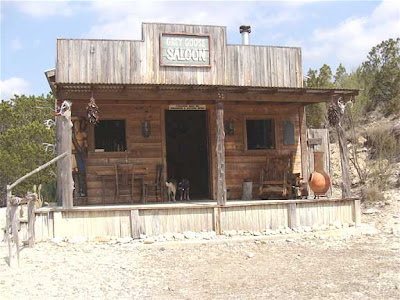 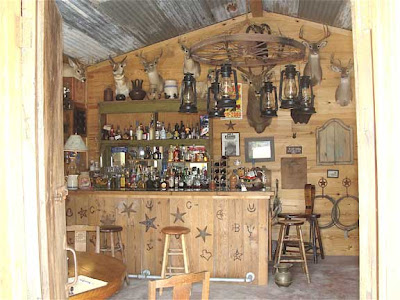 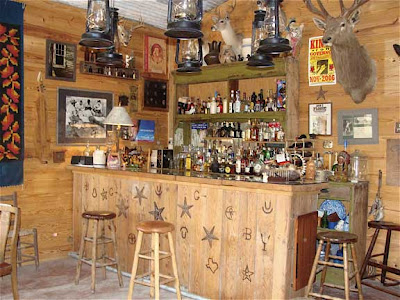 I love the saloon!

Hi Carol! It is so awesome! You must come with us, the next time we visit Liz and Jim's! I told them today, "I could live in here!"

Great blogging Nance, I love the photos of the Grey Goose Saloon, it looks so cool.

So glad Beckham is recovering from his surgery. He must have been so adorable, all groggy from the anaesthetic. Poor guy!
Will he still be able to play soccer, without his balls that is? LOL!!
Can't wait for your next video of him, he's just the sweetest little pig!

Hello Fay! When you come down from Canada, Tone and I will take you to the Grey Goose Saloon—you'll love it and Liz and Jim!

Beck is doing great and really becoming some what of a celebrity! People are showing up out here just to get their picture taken with Beckham!
So, when you come down here, we will go into the Space Ship, and then venture into Outer Space, go over and visit with Kinky, go on a two hour horseback ride, then slip over to the Grey Goose Saloon, and then take a picture of you with Beckham and try to get him to autograph for you!

P.S. Beck has bounced back from his surgery and playing soccer with anyone who will play with him!