This morning at seven forty-five I called The Rose at 99.9 to do The Harley Show and it was so much fun. Randy Sanders of The Save Inn Restaurant was in the studio with Harley and we had a fun time. When Harley asked me to tell Randy the Eternal Squirrel story we couldn't quit laughing. And today Ms. Sparky was Harley's Pet of the Week.

After breakfast I walked six more miles and then I went outside to say hello to all of the dogs and to Lisa, Meghan and Matt. After I had petted every dog and told them that I loved them and their tails wagged, Lisa drove up as they were leaving and she told me that she loved my baby pink overalls that I was wearing with my matching pink Crocs and ecru colored turtleneck, and she wanted to know where I bought my overalls. "Thank you, Lisa. I also have a lavender pair too and you can't buy them—you have to make them pink. Go to Gibson's and buy the white painters overalls and some baby pink dye. It is really easy to dye them and..."

After Team L&M drove away, a pickup entered the rescue ranch as I was walking up to the trailer. I knew who was coming in so I threw a rock at the trailer so Tony would come outside and help me put Clark Kent into a pen.

Yesterday Susie called to tell me that they loved Clark Kent but they had to return him because he was taller than Marcus when he stood up on his hind legs and Marcus was scared of him when he jumped up on him. They were sick about having to return Clark to us. They felt that Marcus needed a much smaller dog. And she told me that Clark Kent was one of the best dogs that they had ever had. "He's a perfect dog."

When Clark Kent got out of the pickup his tail was wagging wildly when he saw us and then Tony took Clark to a pen while Ron gave me Clark's paperwork, toys, bowls and heart worm medicine. After Ron drove off I went to Clark's pen where he was playing with Tone. "He's happy and is going to be fine, Nance," Tony said as Clark kissed him repeatedly on his cheek. We love that dog.

After lunch while I was outside visiting with Clark Kent‚ Jon Wolfmueller called and left a message for me. When I came back inside I listened to Jon's message, "Nancy, Donna "The Drummer" Schloss was just in here. She bought a ukulele next door at Hill Country Music and she asked me to call you and tell you that she hopes that you will take the beginner's ukulele class with her at three oclock today." Then he started laughing and said, "Call me."

I thought about it for a minute and then I half-hollered down the hall, "Tone! I want to take that ukulele course with Donna. What do you think? "

"Do it!" Tone softly yelled back as he was doing farm work. So I picked up the phone and punched in Wolfmueller's Books phone number and Jon answered the phone. He laughed when I told him that I was going to take the one hour class and then he suggested that I call Hill Country Music next door to them to see if they had anymore ukuleles.

After Jon gave me the music store's phone number I called Randy at Hill Country Music. "Hi, Randy. This is Cousin Nancy. Jon Wolfmueller just called me and told me that Donna "The Drummer" Schloss, who I guess is now going to be called Donna "The Uke" Schloss was just in there and she bought a ukulele from you. I have decided to take the class with her and I need to buy a uke from you too. Can you please tell me the prices of your ukuleles?"

We arrived at Wolfmueller's Books at two-fifteen and thirty seconds later Sandy, Tony and I were next door in the music store. "Randy," Sandy said. "Cousin Nancy needs to buy a ukulele from you."

As Randy shook hands with me a man standing at the counter said, "Well hello, Cousin Nancy! I'm T-Bone. I work with Harley over at the Rose and..." So I shook his hand too. Then Randy showed me his cheapest ukulele and I told him that I liked it and would take it. After writing him a check for $98.72 Sandy, Tony and I left the store and returned to Wolfmueller's Books. Then Sandy gave us directions to where the ukulele class was being held and Tone and I took off for Copies Plus to pick up his new postcards because we had a little time to kill.

While Tony was inside Copies Plus I stayed inside Buttermilk and quickly studied the ukulele chord chart because I had forgotten the chords because I haven't played a uke since I was seven or eight years old. When Tony walked out of Copies Plus he was wearing a big grin on his face. When he got into Buttermilk he said, "They turned out great! Look!" I "looked" as he drove me to my class on Guadalupe Street. His postcards were absolutely beautiful and I told him so. He is such a great photographer.

My one hour ukulele class was so much fun and Betty, the instructor was a great teacher. And Donna sat next to me with her new pineapple shaped ukulele! Before the class began Betty asked all of us to introduce and tell everyone about ourselves and it was hilarious. Several of the senior citizens were retired lawyers from Houston with great sense of humors and one woman was a retired Private Investigator etc. When it was my turn I said, "My name is Nancy and I am the Executive Director for the Utopia Animal Rescue Ranch and I..."

"You're Cousin Nancy!" several people said and I shook my head yes and then I turned about five shades of red and then I continued on. Then it was Donna's turn, and then we started strumming. By the end of the fun class I thanked Betty and told her how much I had enjoyed it, and told her that I would be coming back.

We had a surprise waiting for us when we returned to the rescue ranch. As we pulled up to the trailer I said, "Oh My God, Tony! Look where your  Photo Booth is!" Then we started laughing. The gusting winds had blown it about seventy feet and it was laying on its side— rocking back and forth outside our front yard fence near the Eternal Squirrel. 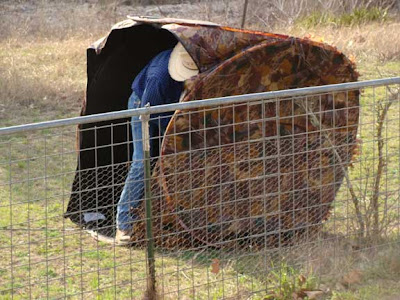 Here is a short one minute and forty-two second video clip of Tony's Mobile Photo Booth Blowing In The Wind.  And this one is a funny thirty-four second video where Tony asks me, "Where's the chair?"

Y'all have a great evening!
Posted by cousin nancy at 9:12 PM

David and I are leaving our photography blind skyhook by the door. If Tony's blind gets out of that fence in these March winds, we're ready to snag it for ya!

(BTW we've asked our helicopter pilot friend in Harper to keep an eye out for it too - just in case that blind goes east of us and/or out of reach of our skyhook!)

Damn Tony, you need to go on the road with this photo booth routine! Ukulele lessons, gotta admire you and Donna "the drummer", sounds like a blast taking these lessons. The last person I can remember havig a top 40 song playing a ukulele is Tiny Tim, keep your day jobs.

Hi Mari and Roger! Mari, I am glad that you and David and y'all's helicopter friend are prepared to snag Tony's Photo Booth for us but it is not going to be easy because it is camouflaged. Tony says to thank y'all and he said if his chair flies by and you catch it please drop it off at Wolfmueller's Books and we'll swing by and pick it up. It's gray with blue padding.

Roger, Tony doesn't like to fly so he and his Photo Booth are grounded and won't be doing a fly-by over Wichita, Kansas anytime soon. Please do us a favor though. Please watch the night sky for the next few days and let us know if you and Mary spot T.'s chair. Thank y'all for the comments.

Well, it works better if you sing-song it out loud. LOL !!

Hi Christy! Thank you for the suggestion, but I can't say those words or think about them because I feel like I would be projecting and if it did come true our dogs would have fleas. : ) Thanks for the comment.