6:22 PM: Tonight's post might be cut short because of the possibility of thunderstorms so I am will type faster than fast in case I have to unplug.

This morning I overslept. I got up at seven-thirty (which used to be six-thirty) so instead of walking the eight miles I had planned to walk this morning I only walked six. It just thundered outside! More later...

7:10 PM:  It is raining outside and the thunder is far away for now. After walking the six miles, Tony's sister, Annie from New Braunfels, arrived so they could spend some time together and take pictures in Kerrville and out on the ranch.

After they took off for Kerrville, Lisa and Meghan arrived to do Tony's chores for him so he could be with Annie. Matt wasn't able to come out because he had something that he needed to take care of. Around eleven o'clock I went outside and I had a fun visit with L&M and they asked me to do another shout out to their friend Mark in Mississippi. Mark in Mississippi still Rocks!

Around one o'clock I went to Medina to meet up with Tony and his family at the Apple Cider Mill to eat lunch and I had a lot of fun. After we ate we went outside and visited by Buttermilk—then the funniest thing happend.

As we talked Stacie who is Tony's brother Sam's wife suddenly waved and said to a young kid on a bike that was passing by us, "Hi, Austin!" and then then we heard a loud thud. Austin tried to wave at Stacie but he lost his balance and ran into the back bumper of the fancy white SUV parked next to Buttermilk. Then Austin walked up to us laughing about his stupid accident and we laughed with him. Then he pedaled off down Main Street.

As we laughed and teased Stacie about causing Austin to wreck his bike the alarm system on the SUV went off and blasted out a good drum beat and then it stopped. "I wonder what set that off?" I asked.

"I think she did," Stacie whispered, "there are two women inside the SUV." I looked but the windows had a dark tint and I could not see them. After hugs and handshakes as we were leaving a man walked out of the Apple store and a woman got out of the SUV. As I crossed the street to get to Trigger I heard the man calmly say to his wife, "It's no big deal. We can put some touch up paint on it." But she didn't sound too happy about that.

When Trigger and I arrived back at the rescue ranch Tony and Annie were just getting out of Buttermilk, and Sam, Stacie and Zachary were right behind me in their pickup. We all went into Outer Space. When I told them about the man coming out of the store and what he said to his angry wife Stacie said, "I saw a three or four inch gash where the paint was removed from the bumper on our way to our truck. Austin's bike didn't have rubber grips on the handlebars..." We were all surprised to hear her news.

"As Tony and I pulled out of the parking lot I saw the woman writing down the rescue ranch's phone number," Annie said. "Why? It's not our fault that Austin crashed..."

"They probably just want their insurance man to call us so we can verify that Austin accidentally lost control of his bike," I said.

Around four o'clock T. and I went over to the Lodge to visit with Kinky. Ten minutes into our conversation I suggested that Kinky and Tony shoot a game of pool and they liked my idea. The game was very close. Kinky would sink two balls then Tone would sink two balls, etc. Near the end it got more tense and Kinky jokingly said, "I'm fixin' to kick some major butt."

"Major Butt could be Tony's new nickname!" I said as Kinky missed his shot, because we were all laughing. Two minutes later:  The Medina Bulldog aka Major Butt —1! The Hummingbird Man —0. Yeah!

When we arrived back at the rescue ranch I had nine new phone calls to return and the last one I returned made me smile—it was our friend Ousie in Houston. Ousie and her husband Harry own a very popular restaurant in Houston called Ousie's Table and she had called to invite me to do a book signing at their fancy restaurant. "....I'm flattered that you have asked me to do a book signing at your restaurant. Ousie is y'all's restaurant in the middle of Houston?" I asked.

"Yes, it is," Ousie half bragged. Then I had to tell her about my fear of driving in big cities and getting lost all of the time and not sure that I could do it. "Get someone to drive you," Ousie suggested. "Harry and I really want to do a book signing for you. Your famous and your friend Kinky is infamous..."

After returning the last phone call for the day, Tone asked me if I could wash some red and white damp rags from his boat that were starting to mildew. An hour ago I put them into Queen Bee along with a little bleach and soap. Before putting them into the Airy Queen I took this picture of his pink and red rags. Sorry, Tony. I love you! I will buy you some new ones. 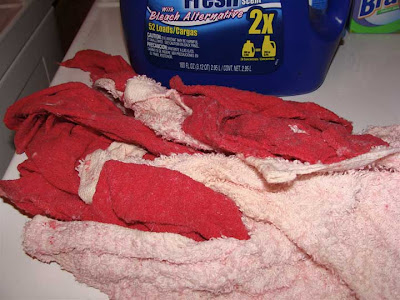 It is starting to rain and thunder again and I am fixin' to unplug everything.
Y'all have a great evening!
Posted by cousin nancy at 8:22 PM

Good morning Cousin Nancy thank you again your volunteers are the best, by the way i am an east Texas boy transplanted here in Mississippi thanks to the Air Force, see ya will keep reading. Your Friend Mark.