This morning I woke up early and was thrilled with myself until Tony told me that it was seven forty-five. "It would have been six forty-five yesterday...." I grumbled on about my dislike of Daylight Savings Time and how it was temporarily wrecking my life.

"I want to take you to breakfast at the Save Inn this morning," Tone said trying to cheer me up. "Go get dressed while I feed Lucky and the dogs."

When we arrived at Randy and Lisa's Save Inn Restaurant the parking lot was nearly full but we found a place to park near the street. After we sat down at the table that we always sit at, near the checkout counter our always friendly waitress came over and asked, "Coffee for Tony and tea for Cousin Nancy?" Tone and I shook our heads yes. When she took off to get our drinks T. and I talked about her always remembering what we like to drink and order. After she set our drinks down on the table she remembered what we always order for breakfast and we shook our heads yes again.

As I sipped on my tea I looked around the room full of people and saw Grace Atwood waving at me from a table across the room. I waved back and then Tone asked me who I was waving to. "Grace and Dick Atwood." Tony turned around and waved back to our friends and neighbors from Medina.

Before heading back to the ranch we went to H.E.B. to get a few groceries, but mainly to get the "C" batteries needed for our new Frontgate Atomic Digital Wall Clock with Caller ID and Weather Station that Carol and James gave to us.

When we got back home Tony helped me put the batteries into the sensors and the atomic clock weather station and then he went outside to work, and he left me in the kitchen so I could figure out how to program it so we could put it on the wall.

Fortunately the instructions were easy to follow, and I am proud to say that at ten forty-four I took this picture of our incredible Frontgate Atomic Wall clock with all its bells and whistles hanging on our wall in the big room! 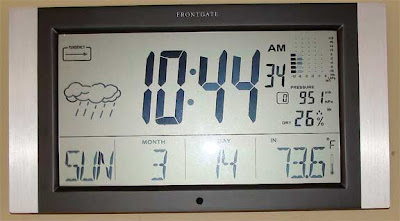 After taking this picture I went back into the office and dialed our phone number from the fax machine and then I skipped to the big room to watch it show the phone number at the bottom where the date is. And it appeared on the second ring! I was thrilled! Once again, thank you, Carol and James for giving us the coolest Digital Wall Clock...ever made on this planet! I love it!
A few minutes later as I was admiring it the phone rang. On the second ring the bottom lit up with Kinky's telephone number so I picked up the handset.
One minute later as I was driving Buttermilk out of the rescue ranch to go see Kinky I saw Tony in Dusty and Sandy's pen and told him that our new super-toy was working and hanging on the wall and that I could not wait for him to see it.
While I was having a fun visit with Kinky in the kitchen I told him about the great gift that Carol and James had given to us. By the time I finished telling him how cool it was he told me that he wanted one too! And he asked me to go online and order one for him since he doesn't have a computer.
Around two o'clock which used to be one o'clock, I called Kinky and invited him to come over to see our the Atomic Digital Clock with... Five minutes later Tone went into the office and dialed our number as Kinky and I stared at it in the big room. When it showed our fax number Kinky was amazed and told me that he could not wait to get one. So I ordered him one as soon as he was out our front door. Then I went back to editing my book.
As of seven o'clock (which used to be six o'clock) I am proud to say that I have completed all of Sheryl's edits for the second time! I probably only have about five to six more hours of work before I can send it off to get it published! Yeah!
If anyone wants to order a Frontgate... like ours go to Frontgate.com.  The item number is: 39683 and it is on sale.
P.S. Yesterday I walked six miles and forgot to post it until today. And today I walked 0 miles. Tomorrow I plan to walk eight miles to make up for today.
Y'all have a great evening!
Posted by cousin nancy at 8:15 PM