I apologize for not writing much this weekend but I have been really busy because I am trying to finish my book and we have had a lot of the Spring Break visitors out here. Since I didn't write a blog on Friday I want to tell you about it because Friday was a good day gone bad and that is why I didn't write about it.

Friday morning was great. At eleven o'clock Tom and Barbara Carpenter arrived at the rescue ranch on time for their scheduled appointment to meet Tony and me and to take a tour. Kinky had met the couple a few months back and he had invited them to come out to see our  rescue ranch.

I was washing dishes when Matt came inside to tell me that Tom and Barbara were here, so I phoned Kinky to let him know they had arrived before going outside to greet them. As soon as I saw Tom and Barbara I liked them before we even shook hands and gave each other hugs. I felt like I had known them all of my life—they were my kind of people so I invited them into the trailer for some coffee and Barbara's homemade cookies that she had made just for us.

After I had eaten one of Barbara's delicious cookies Tony and Kinky came inside the trailer for a really fun visit with them. It turned out that Tony knew Tom's family and Tom had many nice things to say about T.'s parents and family. As Tom told Kinky and Tone stories about his family that grew up in Medina, Barbara and I found out that we had a lot in common and we couldn't quit talking. When the coffee pot was empty we gave Barbara and Tom a tour of our rescue ranch then we all went over to the Lodge to visit some more.

When it was time for the Carpenters to leave we were out in the parking lot talking about their  re-modeling that was going on at their ranch so I told them about the Space Ship and how much fun I had  remodeling it. Before our conversation ended Tom said, "Cousin Nancy, we have an old trailer like the one you described, that needs remodeling and I will give it to you..." I was thrilled so I invited them back over to the rescue ranch so I could show them what we had done with the Space Ship! So all of us took off for rescue ranch because Kinky wanted to have a picnic with Toto and our dogs while I showed off my guest trailer to them.

Barbara and Tom loved my Space Ship, my dogs loved Kinky's picnic and I loved the Carpenters. After our new friends left and Kinky drove home I went outside and had a fun visit with our super dedicated volunteers: Ellen, June, Eileen, Jim, Lisa, Matt and Meghann. Thank y'all so much!

After lunch Lisa and Matt came back out to help Tony and Ben mow and weed-eat the grass while I returned phone calls and then I worked on my book. When the mowing was done I went outside to visit with everyone and to thank them. While we were visiting outside by my writing cabin Will drove up with some old friends of ours—Katie and Eddie and their two adorable children so I gave them a tour while Will visited with Tony, Lisa, Ben and Matt. After a nice visit with Eddie and Katie they left because they were headed to San Antonio before heading home to Houston.

While visiting with everyone outside, it was decided that Tony would haul his old projector television that was occupying unwanted space inside my cabin to Lisa's house so Ben and Matt helped Tone load it into the back of Trigger and they took off for Kerrville.

When I came back inside things went south real fast when I checked my messages on the answering machine. A woman had called from Town Lake Animal Shelter in Austin to tell me that two of our great dogs that had been adopted out in 2005 had just been surrendered to them—Ben Stiller and Gracie May! I was sick. I love Ben and Gracie and could not believe that they had been dumped off at the pound so I called Town Lake and left a lenghtly message on their machine saying that we definitely wanted the dogs back and to please not euthanize them and to please call me as soon as possible.

When T. returned from Kerrville I told him about Ben and Gracie May and he got really mad. "What in the world is wrong with those people? Nance, we thought they were great people. I swear people make me sick that do that...." After a long discussion we started calling friends to see if any of them could pick up the dogs for us but no one answered their phones.

Early Saturday morning I called Town Lake and was able to speak to a nice woman about our dogs. I told her that I was trying to find someone to pick them up for us but had not had any luck so far. She promised me that Ben and Gracie were safe and they would hold them until we could get them.

I haven't found anyone that can do it yet, but I think by tomorrow morning it will all be worked out. I couldn't find a picture of Gracie May but here is a picture of Ben Stiller one of the sweetest dogs that I have ever known. 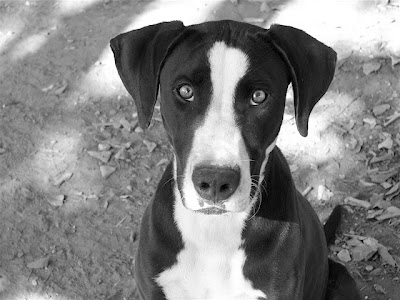 Today has been quiet thank goodness. After walking six miles with Leslie this morning I have spent most of the day winding up my book. I only have about an hours work to be done with it and then I will send it off  and get it published at last.
This evening I took a break from my book and I looked out the window and could not believe what I saw outside our front yard. I grabbed my camera and took a shot of it and then I half-hollered down the hall, "Tony! Grab your camera! There is a Bald-headed Eagle outside!" Within seconds Tony had his camera in hand and was looking out the window at the Eagle.
Before he could shoot it—it flew away. "Nance, that was not a Bald-headed Eagle. I think it was an Osprey or a..." After a very short argument we agreed to disagree. Here is the picture that I took of the "Bald-headed Eagle." Can any of y'all help us identify what kind of bird it is? 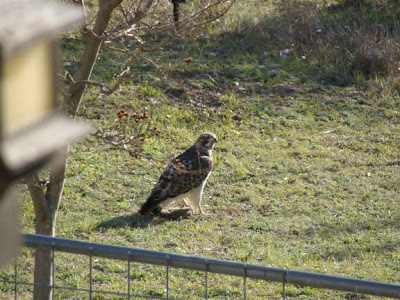 It is nine-fifteen and time for me to go to bed. After we get Ben and Gracie back tomorrow or Tuesday, I can't wait to go over to the Carpenter's ranch to check out the new/used trailer that I get to remodel!
Y'all have a great evening!
Posted by cousin nancy at 9:15 PM

I had to read the part about the people dumping their dogs at the shelter twice, I can not understand how a person can have these dogs for five years and then just get rid of them. A phone call to the ranch wouldn't have been too much to ask. Have you tried to contact the people? Just curious about how they might justify not calling you. Ben Stiller sure is a good looking guy!

Dang, Cousin Nancy - I sure wish you HAD posted your need for transport from Town Lake earlier. I was in Austin Fri/Sat AND Sun and had empty dog crates with me each day. It would have been easy for me to pick up and bring the dogs to you. Yeah, I know, hindsight....

I'll be in Fredericksburg tomorrow about 11 - can anyone bring them that far - or say, Stonewall?

big hawk :) will look it up; also there is another bird like a hawk, northern harrier , beautiful shot and viewing, thanks.