This morning after I walked six miles I went over to Kinky's for a short visit. When I told him about trying to sell one of his books on eBay he had a light bulb moment. "Nance, why don't you sell my pool table on eBay and sell it?" Kinky said with enthusiasm. "We could split it half and half..."

"Sure, I'll do it but are you sure that you really want to sell your pool table?"

"Yes. I have been thinking about selling it for the past two years..." 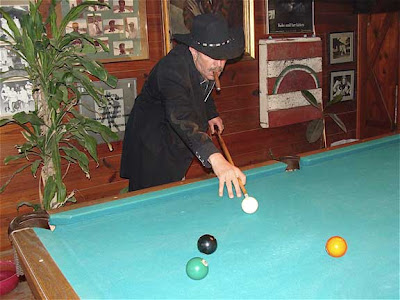 When I got home I did paperwork and returned phone calls and then made lunch. After lunch Tony went to Kerrville to pick up his postcards at Copies Plus and then swing by Koyote Ranch to see if they wanted to buy any to sell, while I spent over two hours on the Internet checking prices on used pool table and talking back and forth on the phone to Sandy and Jon at Wolfmueller's Books about selling Kinky's pool table on eBay.

When Tone came home he had great news to tell me. "Nance, the man at Koyote Ranch loved my postcards and he bought ten of each! And he told me that he would be reordering more real soon!" I was thrilled for Tony and told him so. I love his photography.

About an hour ago the phone rang—it was Jon. "Hi, Nancy. It's Jon."

"Sandy and I wanted to know if it would be okay if we came out to the rescue ranch after we close."

"That sounds great, Jon! I'm glad that you called because I need to go take a shower." Jon laughed. "I can't wait to show you my new toy pig that laughs and moves. I promise that it will make y'all laugh out loud and..."

"We've seen it. We watched your video..." As soon as we hung up, I lit a stick of my Naga Champa incense and then jumped into the shower.

Well it's nearly five-twenty and Sandy and Jon should be arriving out here in about twenty minutes and I am sure that we will have fun tonight! As soon as I put Kinky's pool table up on eBay I will let y'all know so you can go check it out.

Y'all have a great evening!
Posted by cousin nancy at 5:20 PM

Tell Kinky---for whatever little it matters---that I think it was long overdue. The table filled up his living room and was counterinducive (if there's such a word) to sitting around and enjoying casual group conversation.
Good show!
---'Erb

If 'Erb is going to make up his own words, should be "counterconducive", not "counterinducive"!
---Karen

Why in the hell would Kinky want to sell his pool table? I was in his house and I think it makes for the perfect "man cave". What the hell ya gonna put in it's place, a baby blue suede pit group? As heavy as a pool table is, I would sell it on Craigs list to local people. Kinky, you will regret selling that table. How much are you asking? Mikey and Little Bear both have Kennel Cough, probably from the dog park, but everybody has so much fun we will probably continue to go there

Hi 'Erb, Karen and Roger! 'Erb, I make up words too. Karen, you have a good eye—I understood what 'Erb was saying and I didn't catch it. And Roger, Kinky and I decided to wait a few days before he decides about the pool table. I will check into Craigs List and I hope Mikey and Little Bear have quit coughing. Thank y'all for the comments.