Because I Am Stupid!

Today I am feeling much better but am taking it slow so I didn't walk this morning. I plan to make up the lost miles in the next few days so I won't get behind or a big behind. I've spent most of my day working on my book. I completely redid the artwork for the front and back cover and I really like how it turned out. I also wrote the last page (A Note From Cousin Nancy) and then I worked on the Table of Contents making sure I had the page numbers right.

The only problem I have with my book now is the page numbering because I am not used to working with Microsoft Word because I have a Mac and use a different writing program. For some reason or because I am stupid I cannot figure out how to change the pages numbers. The first few pages of the book need to be numbered in Roman Numerals and I can't figure out how to do it after spending over two frusterating hours trying today. When I told Tone about it he suggested that I go see Trisha at Copies Plus because she is real smart and she is a Word Wizard, so I think I will as soon as I am totally well.

Yesterday afternoon we had to go to Hondo so we could pick up Trigger from Dixon Automotive. Jimmy Dixon is the best and most honest auto mechanic in Central Texas and we have been using him for car repairs for the past twelve years, told us that Trigger, our beloved 1998 Ford F-150 pickup wasn't going to be around much longer because he needed so much work. "He's safe to drive around the ranch but not on the roads," were his exact words and that made me sicker than I already was.

An hour after we got back home R-1 arrived at our rescue ranch as scheduled. R-1 has been on our waiting list for a long time and he is a Aussie mix, about five years old and a really cool dog. He knows his commands and he loves to ride in cars and he gets along well with other dogs. Because we are over-full out here right now we had to put him in a puppy pen and he does not seem to mind because he is a happy dog. R-1's coat looks short because his past owner kept him shaved, but he does have long hair. Here are a couple of pictures that I took of him when he arrived. 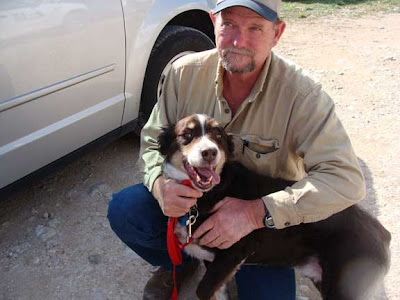 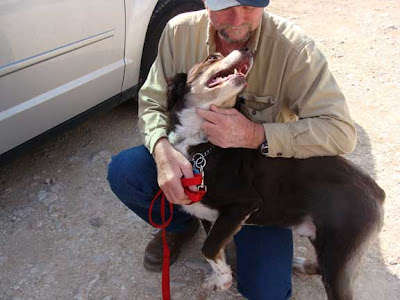 Here are a couple of pictures that I took this past Monday after Lisa delivered Ben Stiller and Gracie to us. They are also really cool dogs and they are about five years old, too. Gracie is in the first picture and Ben is in the following. Hopefully, they will get adopted out soon. 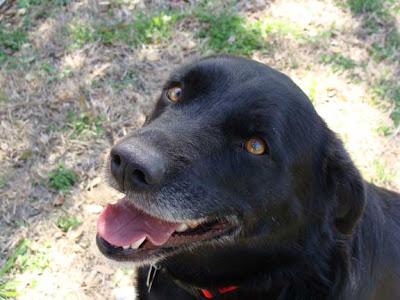 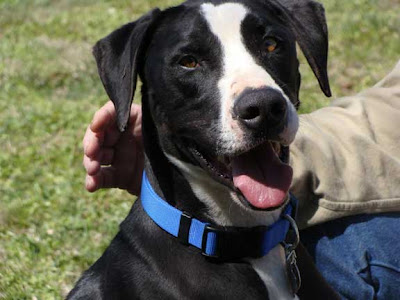 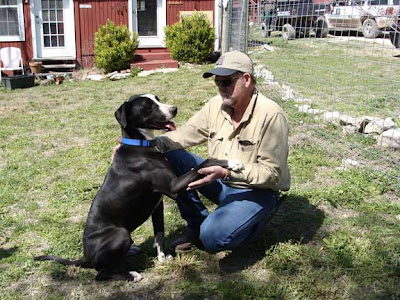 This afternoon we had a pleasant surprise. Ian Robinson, the son of our friends Roger and Patti Robinson came out with his girlfriend Heather and they want to adopt Scooby Doo. They fell in love with him at first sight and they will pick him up on April 15th after they pay a three-hundred dollar dog  deposit on their house. Tony and I are thrilled about Ian and Heather adopting one of our dogs because they love animals as much as we do.
Well, that's about it for tonight because I need to go to bed.
Y'all have a great evening!
Posted by cousin nancy at 8:46 PM

Sorry to hear you're not feeling well. What is the situation with R- 1? from what you describe he came from a really good home. That ben Stiller is sure a handsome guy, Gracie is a cute little thing. I'm looking forward to reading that new book. I sure want to come down to Texas and see everybody this summer. seeing Mr. Rogers and Miss Dee will be great, it's the leaving that's tough. In about another month you will have walked from the ranch to my house in Wichita!