This morning I walked six miles and then I did some paperwork and returned a few phone calls then the phone rang—it was Kinky. "Good morning, Nance. Is Ben there?"

"I just got off of the phone and I need to check something out on the internet. Could you and Ben come over here and look it up for me on your computer?" Kinky asked.

"I will go get Ben and we will be over there in just a few minutes. Bye." I put on my white Utopia Animal Rescue Ranch cap and then my red hoodie sweatshirt and left the trailer. I found Lisa and Matt first. They were down at the feed barn helping Tony with something. After hugs I had a short but fun visit with them. Then I asked, "Do y'all know where Ben is? Kinky called and has asked for us to come over..."

"He's over by the pump house pulling a flat tire off of a riding lawnmower," Tony said. After saying good-bye to everyone Trigger and I went to the pump house and found Ben. Two minutes later he and I walked inside the Lodge and were greeted by Kinky and Will. When Kinky told us what he wanted to see on the internet I handed my laptop to Ben and asked him to find the site. Then we went into the living room and Ben began his search.

"Ben, it is fine to close that window if you want to," I said.

"I'll do it," Kinky said. "It is a little chilly in here." Ben, Will and I started laughing. "What's so funny?" Kinky asked as he started to close a window.

"Kinky, your windows are fine," I said. "I was talking computer talk..." When Ben quickly found the site he asked Will to take over because he needed to get back over to the rescue ranch to help Tony. He wanted to walk over to the rescue ranch so I stayed and visited with Will and Kinky until they no longer needed the use of my computer. "Kinky, are you going to town to eat lunch?" I asked.

"Yes, Tone and I need to run some errands. Why don't we all go to Kerrville and eat lunch together?"

"I'm not sure I can go," Will stated. "Ben has to go to the dump and I am not sure of his plans..." After we decided to eat lunch at one o'clock I left the Lodge and went back over to the rescue ranch to find T. and Ben.

At twelve-thirty Tony and I were visiting with Trisha at Copies Plus. After Tony placed his order for some more of his postcards we left her busy printing business because several customers had walked inside to place orders.

We joked and teased each other as we enjoyed our delicious lunch. Near the end of our luncheon Jon Wolfmueller walked inside, and came up to our table and handed Kinky a book. After Kink thanked him for the book Jon asked me if I was going to watch American Idol tonight. "Tonight's the night that they kick off some people..." As Jon, Tony and I discussed the contestants Kinky started laughing and teased us about needing to get a life!

This afternoon when we got back to the ranch I put out my first Hummingbird feeder on the porch so the scouts can find it. 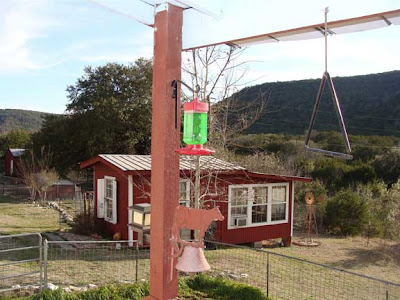 P.S. Tomorrow Tony, Ben and Will are going to have a "Photo-Booth" breakdown contest in the kitchen or in Outer Space! I bet T. wins! And there will be pictures and videos!
Y'all have a great evening!
Posted by cousin nancy at 7:26 PM

Nancy, is it me? Or you? I have been trying to view your blog lately and it's really wide across the screen with small print. No, i haven't been drinking Whiskey.
Anyone else seeing this, or, am I just special?
Fay xo

Good morning, Fay! I don't know what to tell you about the view. It has not changed its appearance for me. You are special.