This morning I walked six miles and am now one mile ahead of where I need to be this month. So far this month I've walked 146 miles (5 miles per day x 29 days = 145) so I am pleased with myself.

Around eleven-thirty I went outside and had a short visit with Lisa and Matt and as usual they made me laugh and fortunately I was not gaseous. Hopefully my "little problem" has passed once and for all and I hope that it never returns.

After Lisa and Matt left, a pickup drove into the ranch and it was our good friend Garnet from Utopia. She told us that she couldn't stay long, but she wanted us to see Reba McIntyre, a beautiful yellow Lab that she and her husband Sandy had adopted from us over eleven years ago. When Garnet opened the back seat door so we could see Reba, their cute, little Chihuahua popped its head out the front seat window to get petted. "That's Chiquita," Garnet said as we visited with Reba and the tiny little dog. "Reba is old. She has arthritis now and she has been one great dog for us!" Garnet said. Tone and I had a fun visit with Garnet but it was too short.

I fixed spaghetti and meatballs for lunch today and it was pretty good, because T. cleaned his plate and then took a second serving. After I cleaned up the kitchen Buttermilk took us and Scooby Doo to Kerrville so I could "Git-R-Done" and Scooby could get a rabies shot. Before we passed Koyote Ranch we decided that Tone would drop me off at the Court House so I could get my DBA's while he dropped off Scoober at Hoegemeyer's. "I'll meet you at Wolfmueller's," Tone said.

It took me about twenty minutes and cost me over $60.00 to get my DBA's and a brand that I wanted to register for my book. When I left the "Cost-House" I headed towards Wolfmueller's books. After I crossed the first intersection safely while standing on the corner of Earl Garrett Street and Main I heard a familiar voice holler, "Hey, Nance! What are you doing?" I turned around and saw Lisa stopped at the signal light.

"I'm working my street corner!" I jokingly yelled back. Then the light changed and I quickly shuffled across the street. When I walked into the bookstore Tone was there sitting in a chair and I was greeted by Mary Jo, her daughter Laura and Jon while T. went to get my pink notebook out of Buttermilk for me so I could show them the cover I had designed for my book.

While I was showing everyone the artwork my friend Sheryl Eddins, who helped me edit my book and throw away over a thousand commas, walked into the bookstore. "I saw you standing on the street corner and I just wanted to come by and say, hi." After a hug from Sheryl I told everyone that we were on our way to Copies Plus to see Trisha Sanders so she could help me tweak the design and get  everything right for me.

"This is not the true color for my book," I said. "I am using a much darker red than this." Then I pulled a sock out of the large envelope to show them the true red color. They all started laughing. "It's a clean sock. I just washed it..." Here is a picture of the sock with the red top. 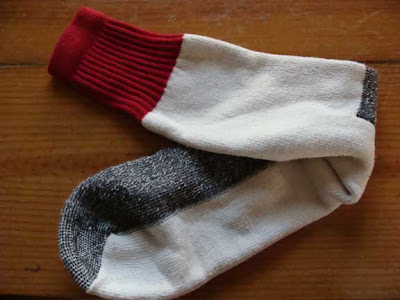 Tone and I visited a little while longer then we took off for Copies Plus so I could drop my envelope off for Trisha and talk to her about the book cover. Because Trish is so talented it did not take long for me to show her what I needed and she was glad that I had brought Tony's sock with me and she asked me where I had bought it.

When we were done at Copies Plus we went to the bank where I was supposed to open up a business checking account but unfortunately we were too late so we went to Hoegemeyer's and picked up Scooby Doo and then we came home.

I went over to the Lodge to see Kinky around five-thirty. During our fun visit he told me that he really liked the movie "Blind Side" and he was glad that Sandra Bullock had won an Academy Award for it. Before leaving the Lodge, Kinky told me an hilarious joke that Willie Nelson had told him yesterday, but  unfortunately I cannot repeat it on this blog, but I did call Ronnie and told it to him and then I called Rick down in Port Aransas and told it to him. They both thought it was hilarious and they promised not to tell anyone that I had told it to them.

Here is a joke that Ronnie told me that I can tell you. "Two cannibals were eating a comedian and one said, "Does this taste funny to you?"

I am glad about getting so much accomplished on my book today. I guess you could say that "I Got-R-Half Done." Tomorrow I plan to go back to Kerrville to open up a business checking account and then all I have left to do is get the page numbering straightened out.

Y'all have a great evening!
Posted by cousin nancy at 7:39 PM

Hello Nance thank you your so cool.Thank you Lisa i needed that....Mark