Today has been a great day. This morning while I was coughing-and-walking six miles inside the trailer with Leslie Sansone, Lisa and Matt were outside helping Tony with his chores while Josh, their new friend and vet-tech walked our dogs. Thank you, Lisa, Matt and Josh!

Around eleven-thirty a nice woman named Brenda called me. She told me that she wanted to come out to look at our dogs and that she might possibly adopt one of them. I told her to come on out and then I gave her the directions to the rescue ranch.

Thirty minutes later I was outside in my pink overalls visiting with our dogs when Brenda arrived. After I welcomed Brenda to the ranch she started talking up a storm about how much she and her family love dogs and  then she started telling me about all of her dogs in her life starting with  her very first dog to the one she has now and she is about my age so, that took a little while. As we walked from pen to pen I was glad that she wanted to do all of the talking because I was scared that if I talked too much I would go into another one of my not so pretty non-stop coughing jags.

After walking twice around the rescue ranch Brenda decided that she wanted to adopt Blue Bell. As we walked towards the barn to tell Tony the good news I suddenly out of nowhere coughed real hard and accidentally farted pretty loud. I was so embarrassed, but I didn't say anything and just kept walking like nothing happened.

When I told everyone that today was Blue Bell's day—they were as thrilled as me. After Brenda signed the adoption papers we said goodbye to Blue Bell and Brenda, as Blue Bell climbed into the front seat and then they drove away.

As Kermit took us to the trailer I told Tony about my thunder-in-the-pants mishap and he thought it was hilarious and he teased me non-stop. "Nance, I'm telling Kinky about this!" Tone said." I can't believe you..." When we came inside the trailer I started coughing non-stop and yes, it happened again but not as loud as the first one thank goodness and that is when Tone called me "Thunder Britches."

As I drank a glass of water to help stop the coughing there was a knock on our door. When I saw our friend Matt Biersmith standing outside I half-hollered, "Come on in, Matt!" While he shook hands with T. I quickly swallowed a couple of teaspoons of Robitussin then I hugged Matt. He told us that he was down in our neck of the woods because he and Candice were going to a friends ranch over in Bandera to cook up some crawfish. "Albert's out in the car and I just wanted to drop off a donation to y'all and..."

"OMG! Albert Einstein is here! You brought Albert!" I said. "I have got to go see him! I love Albert so much. He is one of our rescued dogs that really stole my heart..." Within seconds the three of us left the trailer, jumped into Kermit and took off to go see Albert and Candice who were parked outside the rescue ranch's gate.

As we hugged Candice, Matt let Albert and their other two big well-behaved dogs out of their SUV. The second that I saw Albert I almost teared up because I was so happy for him. He looked so handsome and was as happy as any dog could be. While we petted Albert and their two other sweet dogs we talked about Albert being famous because I wrote about him in my last book and his picture is it. "I am so glad that y'all came out!" I said. "Seeing Albert makes everything that we do worth it. Heck, I was telling Kinky just the other day that the dogs we've rescued and have adopted out live better lives than us and I love it! Right, Albert? I sure do love you..." Here is a picture that I took of the magnificent Albert with Matt. 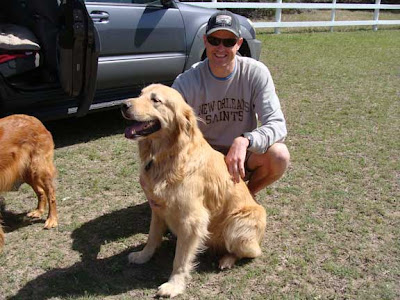 When another vehicle showed up at the rescue ranch for a tour Matt and Candice loaded up their three lucky dogs into their fancy SUV and then they took off for Bandera to party with their friends.

Fortunately, while visiting with Matt and Candice I never coughed so there was the "sound of silence" if you get my drift, but unfortunately, while giving a tour of the rescue ranch to the new arrivals—I blew it!

Y'all have a great evening!
Posted by cousin nancy at 7:35 PM

Mary hasn't asked me why I'm sitting in the bsasement by myself cracking up laughing. Women could make life so much more comfortable if they shared your attitude about farting, ya know, actually admit that it happens to women too. The Englishman said, "Americans are a very strange lot, they say excuse me when they burp and laugh when they fart".

I'm with the Englishmen—excuse me.