You Reap What You Sow!

This morning, after drinking our smoothies, Tony went outside to go check on his garden, so I decided to walk the walk, in front of my television. On cue, when I shoved the workout DVD into the DVD player, my dogs knew what was fixin' to happen, so they ran for cover! They quickly scrambled around 'the big room,' and jumped up, into their favorite old chairs, so I wouldn't accidentally do a hit-and-walk—because they know me, too well. To them, I am the female version of Mr. Magoo—the cartoon character, from way back when.

While the DVD's silent, long running, warning message appeared on the blue colored screen, warning me about going to the nearest, privately owned penitentiary, if I copied their DVD, I put a load of wet, clean clothes, into Steve McQueen, to tumble dry!

FYI: Last month, I forgot to tell y'all, that I changed Airy Queen's name to Steve McQueen, after watching 'Junior Bonner.' Anyway, the message on the screen, goes on to state, that they strongly suggest that I consult my physician, which I don't have, before doing their workout. And, lastly, to protect themselves—it says that if I should possibly drop dead, in my tracks—Tony and Kinky would not be able to sue them. We're talkin'—walk at your own risk here.

Well, I sorta like taking risks, it's a Libra deal, I can't help it, so I pushed the play button on the remote and took my chances—wondering if I would survive another workout. I had my fingers crossed.

I was forty minutes into my personal walk-about, with only five minutes left to go, when Steve loudly beeped, to let me know his work was done drying, and then Tone comes inside the trailer—carrying a large, yellow, five gallon bucket—with his organic, heirloom vegetables inside it!

While I did my final stretches, T. quietly washed the vegetables in the kitchen sink, and then he neatly piled them on the drain board. When my workout was done—I gasped for air, and nearly had a heart attack, when I saw Tony's morning crop! Here's a picture of it! 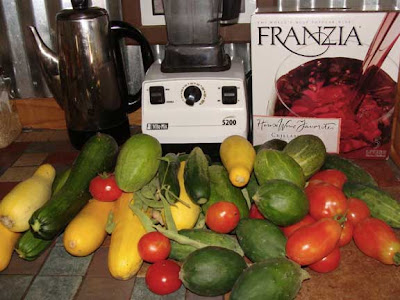 Tone's healthy vegetables were beautiful! We're talkin' beans, onions, tomatoes, cucumbers, yellow squash, and zucchini! And, he was so proud of them!

I didn't know what to do with his vegetable crop, that could easily feed a family of four, for several days, because I don't know how to can, or even know the procedure for freezing fresh vegetables properly. I also knew that there was no way, that we could eat all of his veggies in a day. So, not wanting to hurt Tony's feelings, I said, "They're beautiful, Tone! Congratulations on today's bumper crop!" While I secretly hoped that I would come up with a solution, as to what to do with his vegetables, sometime during the day.

While showering—I nearly had a full blown panic attack, and got soap in my eyes, when I wondered, and then worried if Tony would be harvesting that many vegetables everyday! I knew he had over-planted some, and that you reap what you sow—and the thought of that—truly had me scared!

While I was drying myself off, I started quickly counting, in my mind, the number of local friends that we have—that we could dump his vegetables on, excuse me, I mean share his vegetables with. By the time I was fully dressed—I sadly realized, that my jeans were a little too tight, because I had eaten too much of Ray's birthday cake, but more importantly—I realized that T. and I needed to get a lot more new friends—P.D.Q.!

Fortunately, I had a lot of paperwork to do today, so I put my worries on hold. Around four o'clock, my dear friend, Cindy P. called—she was coming over for a visit! That cheered me up, because I couldn't wait to see her! She's moving to New Mexico, in August, and she had just returned from there.

Before Cindy arrived—I came up with a solution for today's over abundance of vegetables—I'd cook them, and then freeze them! When Cindy arrived, I had cooked nearly half of the squash, onions, zucchini with some tomatoes, and had already put them into the freezer!

When Cindy saw what was left of today's crop, sitting on our drain board, I offered to 'share' them with her, and she was delighted, but not as much as me! I quickly filled a sack up, with Tony's vegetables! I now, only had to cook one more round of vegetables, to clear off the drain board—for tomorrow's crop!

As Cindy and I sipped wine, and talked about the 'Enchanted Land,' which we both love—I put the last containers of cooked veggies into our freezer!

P.S. I want to do a shout out to Marcus, the great waiter at Bella Vita! You Rock!
Posted by cousin nancy at 10:32 PM

Beautiful vegtables. Tony did a great job in his garden.

Good morning, Cindy Lou! Do you want some free vegetables?

Nancy, tell Tony congratulations on his bountiful harvest! They really are gorgeous, wow! You can make fresh Salsa with some of them. Mmmmmmmmmm!

Hey! Maybe you could offer free vegetables with every dog adoption LOL!!

is it hard walking around with green thumbs?

Hi Fay and Anon! Fay, be on the lookout for some holiday Cousin Nancy salsa in December! And, Anon, it is hard, and we can live with it. Thank y'all for your comments!

Roasted vegetables. All except the cucumbers, of course. Simply cut into quarters or eighths, place in a pan, dump a tablespoon or so of olive oil, throw into a 500F.+ oven for 20-25 minutes. And then eat cold. Oh, and add some sliced garlic to the mix before roasting.

Hi Jennifer! Thank you for the recipe! It sounds delicious, and I will try it!