Tuesday was a lot of fun! After I had walked eight fast miles and cleaned up—Bob and Kathi H., from Rockwall or Rowlett, I can't remember, came out to take a tour of the rescue ranch! They had called on Monday, and had made an appointment to come out around eleven o'clock—they were on time. Tony and I liked them instantly, so we gave them one of our famous Grand Tours, which included going into the Space Ship, then into Outer Space where we had a great visit!

After a fun visit in Outer Space, Tony and I invited them inside our trailer. They were amazed, when they walked inside—they loved it, and could not believe it was an old 1983 trailer! They loved my painted rugs on the floor, Tone's beautiful, handcrafted, cedar furniture, and their jaws dropped, when they saw our bed that T. had made for us, when we got married—ten years ago! I was thrilled, because I love my trailer so much, and am so proud of it! I bought it for only six or seven thousand dollars, I can't remember, back in 1995, after my husband had died. And, I wouldn't take a million dollars for it—it's mine—it's home! On second thought, I might consider taking anything over a million, but that's never going to happen. Laugh out loud!

After leaving the trailer, we took Kathi and Bob into the Space Ship—what can I say—they loved it, too! Then we went inside my writing cabin—and yes, they loved it, more, and took pictures of the insidel! I loved it! Now it was time to show them the rescue ranch, but that didn't happen. "Where does Kinky live?" Bob asked. "Does he come down here much?"

"Kinky lives here," I said. "In fact, he is home right now. Would y'all like to go visit with him?" Their eyes got big, they covered their mouths with their hands, and nodded yes! "Y'all wait right here," I said, as we stood by the pig pen. "Let me go inside, and give him a call to see if we can come over there for a visit." I took off for the trailer.

Two minutes later, I walked out onto the porch and hollered, "We're going over to Kinky's! He is leaving pretty soon, to go to Kerrville, but he said for us to come on over—now!" I thought Bob was going to faint, from excitement! They jumped into their car, Tony and I jumped into Kermit, and we took off! They followed us over the river and through the woods to Kinky's Lodge.

Kinky was great! He gave them his Grand Tour, and we ended up outside, by the Friedman Family Bone Orchard. "Nance," Kinky said. "I've added another relic to the garden. See if you can find it." As Kinky and Bob sipped their coffees, the conversation flowed between the three of them, as I snooped around the garden! Then I laughed out loud!

"I've found it, Kinky!" I declared. "I love it! It's perfect!" This is a picture of Kinky's newest addition to his Bone Orchard! 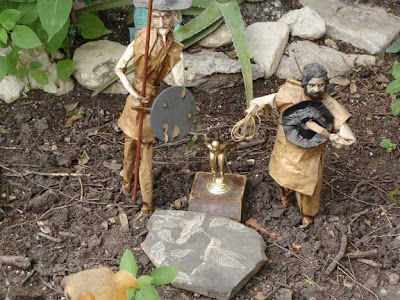 "What are you going to tell John Mankieiwicz? Did you send him his cardigan, yet?"

Kinky needed to get on the road, so before we left the Lodge—I shot all three of them! Then they shot all of us—several times! 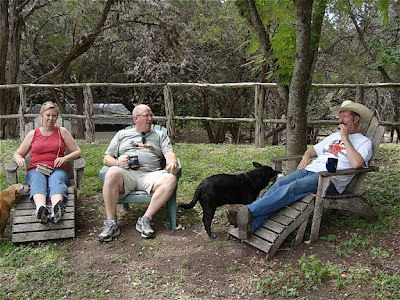 When we returned to the rescue ranch, we gave Kathi and Bob a tour of the rescue ranch and they fell in love with all of our dogs. After handshakes and hugs, they said goodbye, and took off for Medina, to go eat lunch. They were starving, and so was Tony. So, we took off in Trigger, to eat lunch in Kerrville, and then to run some important event errands.

When we walked inside the Chinese restaurant, as we were following the waitress to our table, Lori, one of the famous NoMads, spotted us and waved. I didn't see her wave and kept walking, but Tone didn't—thank goodness, because we ended up sitting at her table, with her thirteen year old nephew, Will! "Mari is joining us," Lori said. "She's on her way, now." Then the waiter showed up, took our orders, and then disappeared. A few minutes later, he quickly reappeared at our table, with our soups! As we sipped our soups, we caught up with each other's news, and then Lori proudly showed us photos of her big Mach agility win, with her dog, a few weeks, ago!

Mari then walks into the restaurant, and comes right over to our table, and sits down with us. After our howdy doodies, Mari says, "I hope that y'all are aware, that y'all are sitting directly across the street from that orange restaurant." We all smiled and nodded, yes. Our lunch was delicious, and filled with laughter! I loved it!

When the waiter, came to deliver our checks with our fortune cookies, Will excused himself from the table, and went to the men's room. "What do y'all's fortunes say?" I asked.

"Mine says, "The whole world is a narrow bridge, the important thing is not to be afraid," Lori said.

"I've always heard that, when you're reading a fortune cookie, you should always add the words, 'in bed,' at the end of it," Mari remarked. "It makes them much more interesting."

Lori then reread hers, and we all said, 'in bed' at the end of it, and started laughing! Mari then reads hers. "Open up your mind. Let your fantasies unwind." Then we all finished it off with—'in bed.'

I was next. "Mental activity keeps you busy at this time." Followed by 'in bed.' Then it was T.'s turn to read his.

"Mine says, 'Nothing in the world is accomplished without passion.'" "In bed," we said in unison—then we burst out laughing. 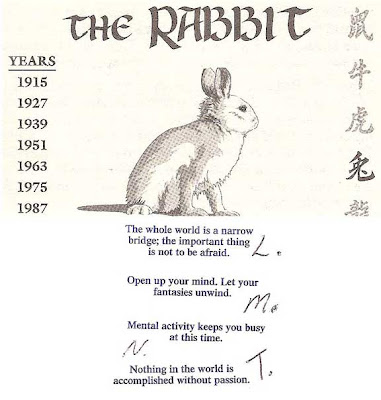 Then Will returns to our table. "Tell us what your fortune says," Mari said. Will read his fortune to us, and no one said a word, but we were all quietly laughing. When it was time for everyone to leave, Mari says, "I've got forty-five minutes to kill. I don't know what to do."

"We're headed over to Wolfmueller's," I said. "Why don't you follow us over there?"

Tony and I arrived first! "Hello, Tony and Cousin Nancy!" Sandy and Jon said, as we entered their bookstore. After howdy doodies, we started visiting. A couple of minutes later, Mari walked into the store, and was greeted by all of us—and that's when the fun began!

To Be Continued...I've got to go to bed! I'm doing Harley in the morning!

Y'all have a great evening!
Posted by cousin nancy at 9:20 PM

My how you love to keep us hanging.

Hi Cindy Lou! Sorry. I need my beauty sleep, if that is possible for someone at fifty-seven and a half years old! Thank you for your comment! Sweet dreams.

Hilarious blog today Nancy, thanks for the laughs.

That photo of John's trophy out in the Friedman Family Bone Orchard is priceless!

I'm away most of the weekend (Goddess-in-training has an out-of-town Highland dance competition) so I want to wish you all good luck, fun and much success for your Fundraiser at the Ranch on Saturday!

Just drove back home to Rockwall from Fredericksburg. Thanks again so much for the visit and go ahead and send the pics to my email address. Let me know if you still have it.

Hi Fay and Bob!
Fay, thank you for your comment and wishes—have a great weekend, too!

Bob and Kathi, I will send the pictures today! We really enjoyed y'all's visit, too! Next time that y'all are down here, please drop by!