Friday morning while I was finishing up my eight fast miles, there was a knock on our door—it was Jim M., one of our great volunteer dog walkers! "Come on in, Jim!" I half-hollered, as I continued to walk with Leslie and her crew. Jim came inside, and we talked about the upcoming event, and what I needed for him to do, when he volunteers that day. Before leaving, to go walk more dogs, Jim told me that he had already walked fifteen dogs! Yeah Jim—thank you!

As soon as Jim left the trailer, I went on to finish my eight miles! Ten minutes later, after I was done sweatin'—I called my good friend, Rick R., the friendly lighthouse keeper, down in Port A., to discuss the upcoming event, because he and Leisa had volunteered to come up, and help me out. "Hello, Cousin Nancy!" Rick said, when he answered his phone. "We're ready to come up there, and do whatever you need for us to do. We're ready to work!" Rick and I talked for a few minutes about what was needed, then before hanging up, he said, "Well, why don't you just go walk eight miles!" Then he laughed!

As I was putting away my lavender colored, two pound hand weights—Tony came inside—he was through feeding the dogs and cleaning their pens. "Tone, I'm fixin' to clean up, and then I have some paperwork to do, and it's going to take me at least an hour."

"You can fix lunch."

"Nope. Take the chicken breasts out of the refrigerator, put them in this dish, then pour some BBQ sauce on them..."

Tony started laughing. "Anything else?"

"Preheat the oven to 350 degrees, and cook the chicken for an hour," I said, as I headed towards our bedroom to get cleaned up. "I'll tell everyone that you fixed lunch for us!" I half-hollered.

When I was done with my paperwork, so was T.'s BBQ chicken! I quickly made us a salad, and used as many cucumbers—from our garden—we're talkin' three. Tony's chicken was delicious, but the salad was a little bit too crunchy.

After lunch, Tony asked me to go to Bandera with him, because he had a surprise for me there. After cleaning up the kitchen, we took off in Trigger. When we arrived in Bandera, Tony parked Trig in front of the OST and told me to stay put. I did as I was told, and listened to my new favorite song, 'Stand By Me,' from the Playing For Change CD.

The song was near the end, when Tone returned to the truck, wearing a big grin on his face. "I had this made for you, and I hope you like it." I opened up the sack to find a pink cap with my name on it! I loved it and told him so.! Here is a picture of it: 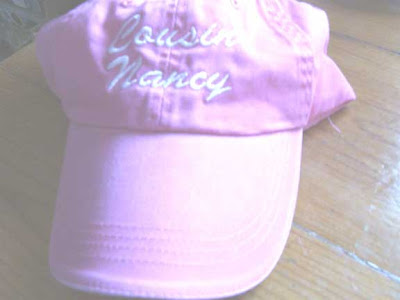 When we got home, Tony had one more surprise for me! He took me to the garden, and pointed at four small plants, "I planted these for you, a couple of days ago!"

"Gourds, Nance. I planted four different kinds of gourds for you, so you can paint and decorate them!" I was thrilled! I love Tony so much!

"Grow Gourds Grow!" I whispered to the tiny plants, as we left the garden, and went to the trailer.

Around five o'clock the phone rang—it was Kinky. "Nance, this is Kinky..."

"Is it too late for me to come over and have a picnic with Toto and your dogs?"

"No. Come on over—they'll love it!" Ten minutes later, Kinky was on the front porch serving my dogs fried chicken, while my iPod played—'Stand By Me,' followed by 'One Love.' When the picnic was over, we all went into Outer Space and had a fun visit.
Posted by cousin nancy at 7:43 PM

Labels: cousin nancy, kinky friedman, playing for change: song around the world—stand by me