This morning, at six o'clock, while I was still asleep, Tony called Kinky to wake him up, so he could do the Imus show. Then Tone and Trigger went to the Old Timer in Medina. I reluctantly crawled out of bed at six-thirty, and did not want to get up, because I was sleeping with the dogs, but I had to get up, so I could turn off the alarm clock. Then I fed our dogs and Lucky, the cat.

As I was preparing our breakfast smoothies, I watched the Imus Show, and Kinky was hilarious! At seven-forty-two, I started recording Imus, then I went online to watch the Harley Show! Three minutes later, I muted Harley doing his live web cast, went over to the phone, and called the Rose 99.9 to do my segment, about the rescue ranch, with Harley!

When I was done, Kinky was done, and Tony walked in the front door at eight o'clock! While we were drinking our breakfasts, the phone rang—it was Kinky. I let Carlton take the call, and listened to what Kinky had to say. Bottom line, he wanted me to call him, and he was anxious for me to come over to the Lodge, to discuss some business with him.

After cleaning up the kitchen, I returned Kinky's phone call. It was short and brief, then Trigger took me over to the Lodge. Kinky and I discussed business, and then we looked for items that he could donate to the silent auction, for his June 13th Kinky Roundup benefit event.

We found six great items for him to donate to the cause, but the last item Kinky decided to donate to the auction, kinda made me sad, because it is the hand painted sign, that I made for Kinky, back in '06, when he ran for governor. I spent several hours making it, and it still hangs above his door in the kitchen, that says—'Governor Kinky Friedman's Command Center!' At first, I tried to talk him out of donating it, but then I realized that I could just make him another one—it was no big deal really. I love making signs.

An hour and a half later, Trigger returned me safely back to the rescue ranch, so I could walk some more miles with my friend, Leslie Sansone, even though I still haven't met her personally. Just as I was starting to 'walk the walk,' our dogs started barking—someone was here! Tony went outside to see who it was.

Just as I was finishing my three minute warm-up, Tony came inside, wearing a grin on his face. "Your order from "Playing For Change' is here. While I was doing double knee lifts, while trying to tuck in my tummy—Tone opened up the package for me. By the time I was doing double side steps—T. held up my black t-shirt, and then he waved the CD/DVD at me—that I had ordered from them! I was thrilled they had arrived, and I couldn't wait to download the music to my iPods, and to watch that incredibly great DVD! 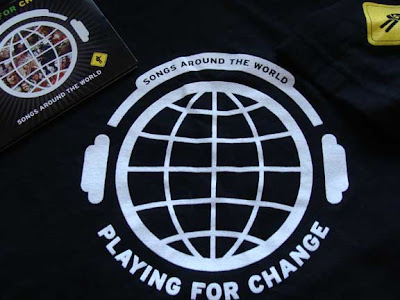 Fifteen minutes before I had completed the four fast miles—the phone rang, again. I couldn't quit race-walking, so Carlton took that call, too. As I was walking circles around 'the big room,' sweating like a pig, and getting a little dizzy, I heard Jon Wolfmueller's voice—telling me that he wanted me to call him, too.

As soon as I was done with the four fast miles, I called Jon. "How was your business meeting with Kinky this morning?" Jon asked.

"How did you know that I went over to Kinky's this morning for a business meeting?" I asked, wondering if Jon had psychic powers that I didn't know about. Jon started laughing!

"You always go over to Kinky's for morning business meetings, Nancy—I read your blog everyday." Then we both laughed, and talked a little business.

After I had cleaned up, I returned three phone calls, before Kinky called, again. "Nance, I am going to Kerrville to buy a new telephone. Can you help me set it up when I get back?"

By the end of our conversation, I had agreed to set it up for him, and to meet him for lunch at Luby's with Tony, at twelve-forty-five. When we pulled into Luby's parking lot, one minute late—we found Kinky sitting inside Mr. Green Jeans talking on his cell phone.

Lunch was delicous and fun, and just before leaving, I saw my friends, Pat G. and Pam M. walk over to a table, carrying their trays of food. As soon as they sat down, I went over to say hello to them, then Kinky and Tony came over to their table. We visited for a few minutes and then we left, so they could enjoy their lunch.

After saying goodbye to Kinky, Trigger took us to Wolfmueller's Books, because I couldn't wait for Sandy and Jon to watch the 'Playing For Change' DVD! They couldn't wait to see it, but unfortunately, there were some technical difficulties—no sound! Before leaving to go back to the ranch, they told us that they would check it out on youtube, and watch 'Stand By Me.'

Tony and I listened to 'Stand By Me' and 'One Love' over and over again, until we arrived home, because those are my two favorite songs on the CD. They are so beautiful, I tear up when I listen to them.

At five-thirty, I went over to the Lodge and hooked up Kinky's new phone, and then came back home.

P.S. Here is one of Kinky's newest bumper stickers, that he gave to me this morning! I love it!

I made sure I got up extra early so I wouldn't miss Kinky's appearance.....duh - then it occurred to me that he was on the Imus show and NOT the Harley show! lol

Have a great weekend, Nancy!

Hey Jude, laugh out loud! Some people call that—having a senior moment! I love it! Have a great weekend, too!

My sister-in-law works with the elderly, she has a lot of Alzheimer's patients. She's come up with two hilarious terms for "senior moments". She says until you get Alzheimer's and forget everything all the time (All-Timers) you first get "Some-timers" and then you progress to "Half-timers". So true and funny!

Hi Fay! Never mind, I forgot what I was going to say!