I am proud to say, that I walked five fast miles this morning, while Tony and Aaron did their chores outside! Then Trigger took T. and me to Kerrville—we had to go to Wal*Mart to get supplies.

Just before we reached our destination, I saw a sign, in front of a popular restaurant, that made me laugh out loud! I wished that I had brought my camera with me, but I didn't. In large black letters it said:

I loved it, and it reminded me to pick up some Extra Strength Rolaids—for Tone. Before going into the super family center, we decided to stick together to speed shop, so we turned off our cell phones, and put them away.

While Tony visited the men's room, I found the Rolaids, and put a jar into our shopping cart. Then Tony found me, and we traveled at a fast pace around the store. As my shopping list grew smaller—our wobbly cart grew in contents, and my checkbook took the hit.

When we got home, after putting up our supplies, I decided to check out the Guinness World Record web site. In no time at all, I found myself filling out their application, in hopes that placing two wild hogs, in forever bed and breakfasts—could be a world record!

The application was pretty long to fill out. Near the end of it, I had two options—I could use their standard method, which could take up to three months to hear back from them, or do their fast track method, which guaranteed me that they would get back to me within three working days, to let me know if we were world record setters, but unfortunately, none of that is ever going to happen.

Just as I was about to submit the application, claiming that Kinky, Tony, Ben and I, at the Utopia Animal Rescue Ranch, had set a world record—it took me to their last page, to pay the application fee. I figured that it wouldn't be very much money, but I was wrong! We're talking over six-hundred and fifty dollars—I was prepared to spend twenty-five. I can understand it being expensive, because everyone and their mother would be applying—I just can't afford it. So, after all of that work, carefully filling out the application—I clicked on the 'Cancel' icon, and left their site. I was pretty disappointed, but not for long.

I decided to make my own award certificate, and it wouldn't cost me a thing, except for my time! And, as Harley Belew likes to say on the radio, "If it's free—it's for me!" I plan on framing the certificate, for the award ceremony video, that hopefully Kinky will participate in, when he gets back. You will need to click on the certificate, to enlarge it, so you can read it, and the trophy I picked is the little pig, sitting next to the Guinness! Cheers! 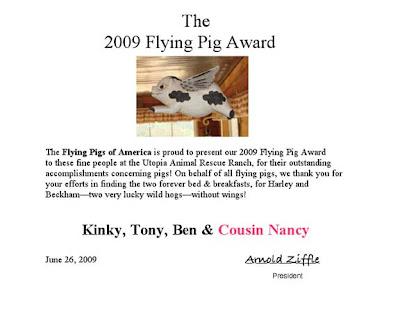 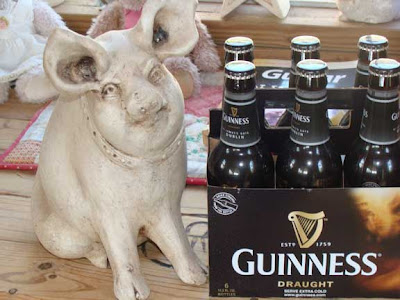 Nancy, I've just read this blog and felt the immediate need to ask if you're ok? Clearly you have spent too much time out in the sun and it has apparently addled your brain! Please take an aspirin and GO LIE DOWN UNDER A FAN in the AIR-CONDITIONING........INDEFINITELY, or at least until the mood to design Flying Pig awards passes!

(Just kidding of course - I'm enjoying the Pig Thread immensely - from the comfort of my air-conditioned home! Thank you my dear departed hero Mr. Friedrich - for inventing air conditioning!)

Greetings Mari! Laugh out loud! I was laughing the whole time that I worked on the flying pig certificate! In fact, I plan to hang a picture of it inside the trailer, my Space Ship, and in my writing cabin! You want a copy? Thank you for making me laugh! Best to you and the NoMads!

I love it Nancy. You do indeed deserve an award to go with those wings.