Today has been a great day, even though I only walked four fast miles 'Sansone Style!' I think the summer heat is sorta zapping my walk-abouts. I was talking to Ben about it, and he agreed with me. He told me that since it got so hot, he hasn't been working out as much either. Since, Mercury is not in retrograde, and it's not full moon time, I am blaming the sun, for not doing eight fast miles everyday.

This morning, Linda T. came out to walk our dogs, and so did Todd and Jan, while Aaron and Ben started dipping our dogs for fleas and ticks! It is a huge task, so Linda helped with the dipping, while Todd continuously fetched, and returned the dogs to their pens. Thank y'all so much! 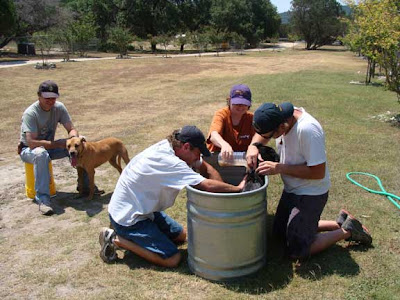 Around eleven o'clock—Kinky called me from Philadelphia. "Hi Nance! Have we gotten anymore rain?"

"Nope, and yesterday was a hundred and two degrees. I've never seen a summer this hot, so early..." We also talked about Beckham's and Mr. Ziffle's two great adoptions, and Kinky laughed out loud, when I told him about 'The Pig Report' e-mail, that I had received from David and Desiree! Here's an excerpt from their note from the Trails End Guest House:

"The guests have just begun to notice Beckham. He makes himself known in a series of grunts and squeals then runs up to the fence to greet everyone or at least that is what the guests think. He is really hoping they have some chilled watermelon rind in their back pocket. His pen is going through an overhaul already. His house has been unassembled and rethought due to unforeseen design modifications ( i.e. he is going to get really big) and he is currently basking in the mists on his veranda under the trees. That translates into we strung a water mister between two cedar trees for him to keep cool and he drug a plastic tarp off the lumber pile, positioned it where it would pond water and has proceeded to make his pen look like a drunken frat boys dorm room. He's all about the comfort.

Any road, what I was e-mailing about was this - the story of Beckham is going to be a long one. There is quite the tale to tell. Amazing what stories animals can tell. Since you said you were interested in his tale would you prefer I e-mail it to you in installments every day or so, or do you want to wait till we hear it all and completely write all of it down? An amazing fellow he is.

Tony and I laughed out loud, as we read their hilarious e-mail! It sounds like Beckham Rules, and he has found his forever Bed and Breakfast! I love it—it is too cool! I replied to their e-mail, and requested the 'installment plan.' I think it will be fun to receive every day or so updates! I can't wait to read their first installment! And, I will definitely post them, so y'all can enjoy them, too.

I just hope that precious, little wild hog, realizes just how lucky he is. There are not many wild hogs, that can brag about living at a fancy B&B!

I guess our rescue ranch can now brag, that we have rescued two wild hogs, Harley and David Beckham, that now live happily at bed and breakfasts! Harley lives in Vanderpool and Beck now resides in Kerrville. I wonder if we could set a Guinness World Record for that?

If not, I could make up a fake Guinness World Record certificate, frame it, and then make a video of Kinky and Tony, standing out by the pig pen, holding Guinness beers in their hands— accepting the 'Placing Two Wild Hogs At B&B's' award, and then giving their acceptance speeches! I'm sure Tony's will be short.

P.S. I forgot to thank Jim, our loyal dog walking volunteer, for coming out yesterday to walk our dogs! Thank you, Jim!
P.S.S. I've just added Guinness beer to my grocery list, and will start working on the award certificate—tomorrow morning!
Posted by cousin nancy at 7:10 PM