This morning after walking another eight fast miles, I went over to the Lodge to visit with Kinky. We talked about the upcoming event, then we went outside to the Friedman Family Bone Orchard and played with The Friedmans for a while. Then we went back inside, and Kinky challenged me to a game of pool!

After the second stripe fell into its pocket, the eight ball fell in, too— on top of it! I had won! Neither one of us could believe it! It made Kinky laugh! Cousin Nancy -1, The Hummingbird Man -0! I loved it, and couldn't wait to come home to tell Tony!

Tony smiled, as I told him all about the game, and me winning! "Nance, I'm glad that you won by default. I'm really proud of you."

After lunch, Kinky called—Carlton took the call, because I was washing the dishes. "Nance, call me. I think I am going deaf. My new phone is making weird ocean sounds." I called Kinky.

"When I use the phone on one side—I hear ocean sounds, and it is driving me crazy!"

"What about the other side?" I asked.

"No ocean sounds," Kinky replied. "Can you come over here, and get Tony to call you—to check it out?" My answer was yes.

"Tony," I half-hollered. "I'm going over to Kinky's to check out his new phone. I need for you to call me over there, in about five minutes. Okay?"

Tony hollered, "Okay." I left the trailer, jumped into Trigger, and we went over the river and through the woods—to the Lodge.
A few minutes later, Kinky's phone rang—it was Tone. I picked up the receiver and said, "Start talking Tony. I've got to try both ears."

"Keep talking Tony," I said, as I switched ears, again. "Thank you, Tone. Bye." I hung up on him. "The problem is with your new phone, Kinky," I said. "We're talkin' white noise. I heard it, too. You're not going deaf." Kinky was somewhat relieved, so Trig took me back home.

Around three-thirty, Kinky called, again. "Nance, Tony—Debora and Little Jewford are here. Come on over." Tony and I did as we were told.

Debora and Little Jewford had come down, from Austin, to discuss the event, and it was eventful! After about an hour or so—we were all ready, and set to go! The 'T's' were crossed and the 'I's" were dotted, and then we crossed our fingers, that this event would be as much fun as the last one! I can't wait for Jerry Jeff Walker and Ramblin' Jack Elliott to perform—they are legends and my heroes!

Before leaving the Lodge, Kinky and I started telling Debora and Little Jewford about John Mankieiwicz's visit, at the ranch, and how much fun we had had with him! We told them about John winning the pool tournaments, and us nicknaming him, The California Wussie. "Y'all, we even had a pool award ceremony," I said. "It was hilarious! Kinky and Tone presented him with a pool trophy, and they made the funniest video for my blog!"

Then Kinky starts telling them about John leaving his navy sweater, at the O.S.T., and Tony and me retrieving it for him—the next day. "They told me," Kinky said. "That was the first time ever, that anyone has ever left a cardigan at the O.S.T.? John made history."

"Have you mailed him his sweater, yet?" I asked.

"No. I'm mailing it tomorrow, along with his trophy," Kinky said. "He forgot to take it." Then he stood up from his chair, walked over to the fireplace, and picked up John's trophy to show to Debora and Little Jewford. We all laughed! Kinky then returned it to the mantle, and then picked up a much smaller pool trophy—and started laughing. "The Medina Bulldog and I are still in a snit about him beating us. I think we'll keep the big trophy, and send him this smaller version. Cowboys don't wear cardigans, and it will save me on postage." 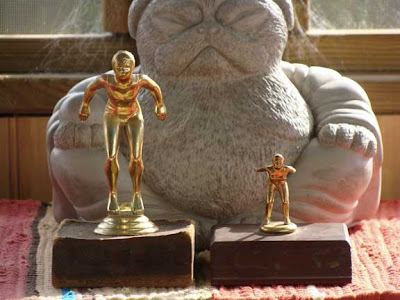 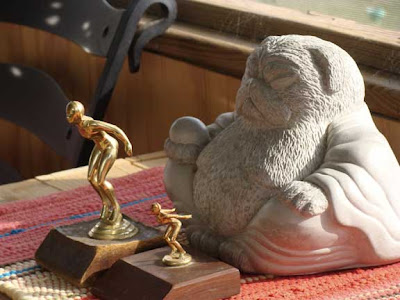 P.S. Wait until I tell y'all about Jon and Sandy's new iPhone docking system—tomorrow!
Posted by cousin nancy at 10:00 PM

You know what? The second I asked Kinky if he would please pick up my cardigan I knew I was in trouble. It's a tough life, being a California Cowboy. (If it was easy, they'd have girls do it and pay 'em in cookies.)

Laugh out loud, John! Thanks for being a great sport! Hey, the next time you come out to the ranch—let's have a roping contest—California vs. Texas! And, don't forget to bring your parka!

What a hilarious blog, Nancy. Congrats on the victory against The Hummingbird Man.

John writes, "It's a tough life, being a California Cowboy. (If it was easy, they'd have girls do it and pay 'em in cookies.)"

Thanks to John & Nancy for letting me start my week with a laugh!

Howdy Fay! I keep pinching myself, because I still can't believe that I beat The Hummingbird Man—by default! I've decided that the next time that John comes out to the ranch, I am going to be a contestant in their pool tournament! It would be so cool if I won the tournament—by default! Thanks for the comment!

To Be Continued... I've got to go walk the walk!

Rack 'em up, Nancy! You're too funny. Can't wait to read about the iPhone docking system...!

Hey Jude! I hope that Vegas is treating you nice, and when are you going to come out and visit us? I want to meet you, and have a roping contest and a pool tournament with you!

P.S. The iPhone story is coming up, tonight, as soon as I finish thanking all of friends!

A win is a win no matter how it comes about.

To answer your question, I would love nothing more than coming out to the beautiful part of the country where you live for a visit! Even though I've been out here for a long time, Vegas just never has been high on my list as a good place to live. But my only family is here, so...
And I'd love to try the roping and some pool! Maybe some day. I don't fly so that kind of slows me down too - lol. But I do want to meet you someday one way or another!

Hey Jude! I don't like to fly either, except in my dreams! I always start out running down a hill, and then sorta just take off! Kinda like Super Man—Clark Kent style, but no costume. Hands out in front of me and feet together. I've never gotten up real high, though—sorta like a tree-top flyer, but I love doing it, and the best part is there is no security checks, luggage, and airport to deal with! And, as Harley likes to say— "If it's free—it's for me! Thank you for your comment!

P.S. I am thinking about doing a once a month—skype deal with everyone real soon. I think it would be a lot of fun! What do you think? Or we could just run some string all around the world, and see how that works! Can you hear me, now?

Whatever you decide to do always turns out to be fun...;) I'm not familiar with Skype but have heard of it... I'm more of a tin can and string girl myself lol

Hey Jude! How many balls of string do think it would take from here to Vegas? I've got two.