The Road Not Taken!

"Morning, Rick," I said. "How are you doing this morning?"

"Not good. I didn't get much sleep last night, because I was worried all night about Leisa. She finally arrived at the rescue ranch a little after four o'clock this morning. She's still sleeping." As I fed my dogs, and cat, Rick poured himself some coffee and sat down at the breakfast bar, and told me all about it. When I started making our breakfast—he was finished. Bottom line, Leisa couldn't get away from Port A. until eleven o'clock, then her cell phone went dead, etc. Leisa was fine—just wore out.

Tony showed up, around seven-thirty, and the three of us ate and drank breakfast. At eight-thirty, my dogs started barking—Ruthie and Kent were here! What a wonderful surprise! I was so excited!

They had come over to drink some coffee with us! Oh my gosh, I was so embarrassed, because I was still in my sweats, the bed wasn't made, and Hazel hadn't made her rounds, yet, etc.! Fortunately, Ruthie and Kent didn't seem to care about any of that.

We went into Outer Space to drink our coffees, and to visit. During the stories and laughter, I kept secretly pinching myself, because I couldn't believe that Ruth Buzzi, the world famous Ruth Buzzi, one of my heroes— was sitting in Outer Space—in my chair, visiting with us, like we'd known each other forever! I was thrilled and must admit truly star struck! I was also glad to see Kent, too. I've known Kent for over seven years, and I count him as family. He's one great man.

After forty minutes of fun, it was time for them to leave. "We're going to Medina to eat breakfast," Kent said. "And, we want Cousin Nancy to join us." I pinched myself really hard—and it really hurt. We're talking a bruise later on. I could not believe that they had just invited me to breakfast!

"I can't believe this!" I said. "Here y'all are, asking me to go eat breakfast with y'all, and I've got to turn you down. I would love to, but I have so much to do this morning—I just can't." Fortunately, they understood. After hugs and handshakes—they took off for Medina.

While Hazel was doing her magic floor trick, I silently cussed to myself for not going to breakfast with Ruthie and Kent. I couldn't believe that I had turned down a once in a lifetime opportunity like that! I was full of regret for not going. I should have gone, but it was too late—that window was closed and nailed down tight. We're talkin'—the road not taken, here, and I was absolutely sick about it.

After Hazel's magic act was over, she went backstage, to the closet—to rest, and I went into action! I called Wolfmueller's Books, first. "Hi Sandy, this is Nancy."

"I'm sorry, but I need to ask one more favor from y'all."

"Could y'all swing by H.E.B., and pick up a box of Cafe Du Monde's beignets mix for me, and a jar of Fain's honey? I want to fix Kent and Ruthie beignets for breakfast tomorrow morning, because Kent told me that Ruthie loves them. And, I would love for you and Jon to join us, for breakfast tomorrow morning." After giving Sandy a detailed description as to where to find that New Orleans famous beignet mix, we said goodbye to each other and then hung up.

After taking a shower, and getting dressed, I went into the kitchen—it was nearly twelve o'clock—time to make my peach cobbler recipe, that my grandfather had given to me—it's delicious, and T. and Kinky love it!

By twelve-fifteen, I had filled three large, foil pans with peach cobbler batter and peaches. Then there was a knock at the door, my dogs didn't bark, because it was my dear friend, Carol. "Come in," I half-hollered, as I shoved the heavy pans into the oven. Carol and I visited, as my dessert for our volunteer's lunch—baked—while Ben was outside, starting to cook the chicken, the sausage, and the beans. Then there was another knock on the door. It was Jon and Sandy, and their friend, Steve Price—ready to volunteer and come to my rescue! "Come in," I half-hollered, again.

"Here's your potato salad, and the beignets mix, and the honey," Sandy said.

"Thank y'all so much," I said, as I put the big pan of potato salad into the refrigerator. "Y'all are lifesavers! Seriously, I can't thank y'all enough for doing this for me." Then there was another knock on the door—it was Mr. Cooper, Charlie and Ellen Cooper, and Charlie's sister, Margaret—reporting for volunteer duty.

After howdys, hugs and handshakes, I gave them all rescue ranch t-shirts to wear. A few minutes later, at one o'clock, the cobblers were done, and the gates outside, by the cattle guard, were opened to our ticket paying guests! Let the show begin!

I then went outside to greet and welcome, and to visit with our other super loyal rescue ranch volunteers: Aaron, Ben, Rick and Leisa, Linda T., Todd and Jan, June, Ellen, J.R. and Jim! They were ready, set—go! And, that is exactly what they did! They happily greeted every visitor, and gave them tours of the rescue ranch.

Ben served lunch to our volunteers around two o'clock. The chicken, sausage, beans and potato salad were delicious! And everyone loved my peach cobbler, served with vanilla ice cream! Then Ben surprised us, when he brought out a brick of Miles of Chocolate, and began serving it to everyone! They loved it, and ate it up, and asked Ben where they could buy it! Here are a couple of pictures of them—following lunch. 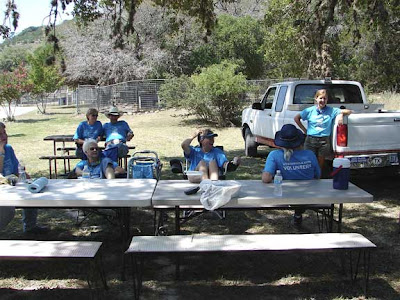 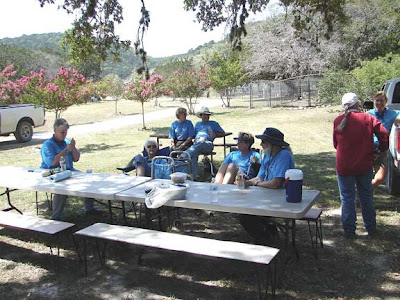 I met several really nice people that afternoon, and really enjoyed meeting and visiting with them, and giving them tours of the rescue ranch, including U.S. Representative Lamar Smith, who was unable to attend our event, but who sent his two children, to represent him. Thank you, Lamar! I wish that you could have been here!

At three o'clock, we shut down the rescue ranch, and everyone went over the river, and through the woods—to enjoy the event!

At six o'clock—the concert started, and it was more than fantastic! Kinky and Little Jewford performed first, and they were the best that I have ever seen them! Then Kinky invited Ruth Buzzi on stage, and she was hilarious and had the crowd in her hands! Then Ramblin' Jack Elliott took the stage, and he was totally awesome! And when he sang, 'Don't Think Twice, It's All Right'—I got goose bumps, and my eyes teared up—it was so beautiful! Jerry Jeff Walker was the last to perform, and he was the icing on the cake! He was so great! My favorite songs that he sung, were Navaho Rug and Mr. Bo Jangles, which also made me tear up! His performance was so great—I don't know the words to describe it. Then, at the very end of the concert, Jerry Jeff surprised everyone in the crowd—including Kinky! He invited Ramblin' Jack Elliott, to join him on stage, and sing one last song. Together, they sang, 'Old Shep' and wrapped up the concert, and tied the knot! There was not a dry eye in the crowd. 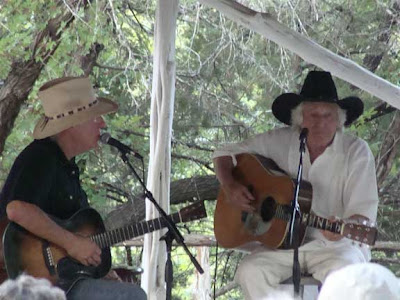 Following the concert, I went over to the gazebo with Tony, where the silent auction was ending. Here are a few pictures that Tony and I took. 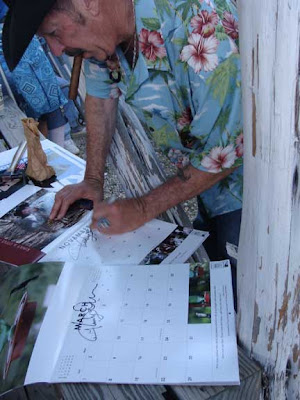 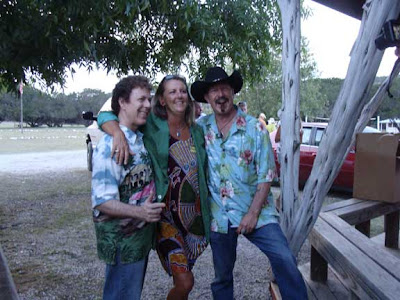 This is my favorite picture that I took, of Kinky signing my 'Governor Kinky Friedman's Command Center,' sign, that I had made for him, years ago, which hung above his kitchen door—until the day before this event. I guess that I will just have to make him another one—real soon. 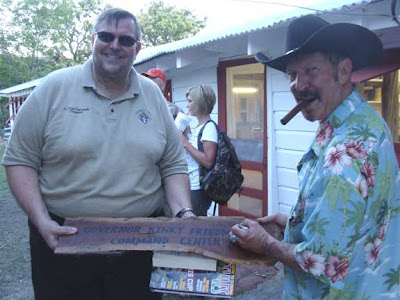 Around eight o'clock, as everyone was leaving, Tony and I invited Becky and Harley Belew to come over to the rescue ranch, for a visit. We took them into the Space Ship, and then we went into Outer Space and had a really fun visit! They left around nine-thirty. By ten o'clock, Tony and I were sound asleep, and snoring loudly.

It's now past my bedtime. I will tell y'all about Sunday's breakfast tomorrow. But before I go to bed, I want to thank, the event volunteers, who helped make Kinky's 2nd Ranch Roundup, a howling success! They are: Will Wallace, Dylan and Sage, Copper, A.J., Constable Richard McCain, from Austin, and his friendly deputy, Stacey, and Steve Samet's supurb team of Echo Hill Camp counselors! Thank you—y'all are the best, and we could not have done it without you!

Y'all have a great evening!
Posted by cousin nancy at 11:46 PM

Nancy I'm glad to hear the event was a success. You are all angels here on earth.

Hi Cindy! You're too sweet!

Hi Nancy! Congrats on a GREAT event!! And bless you for taking care of so many who need you so much. See you in July! P in FL

Sounds like the Round-up was soooo much fun! Thanks so much for sharing the details - and photos!

Another great blog to start my day Nancy, thank you!

The entertainment was incredible, I am so sad that I wasn't able to attend! Your volunteers are so wonderful (and well fed!).

I wish Kinky much gubernatorial success (love that word!) in his upcoming campaign for Governor of the Great State of Texas.

Just wanted to thank you again for making Sylvia and me feel at home in your home. Our visit with you added so much to our trip. We met so many wonderful people that day. Now I can envision Outer space and your "guest house" vividly in my mind, when I read your blog. Looking forward to seeing you in the future.

Hi Richard and Sylvia! I enjoyed visiting with y'all, too, and I am thrilled that you love my Space Ship and Outer Space—not to brag, but they are really cool! I am glad that you enjoyed the event, too! Thank you for the comment.

Howdy Fay! I wish that you could have been here, too! It was such a fun time, and our guests were fun, and good sports about the high temperatures. Thank you for the comment. You Rock!

Hey Jude! I wish that you could have been here, too! I can't wait to meet you in person.

Hi Patty! You and Peggy would have really enjoyed the event! I hope that we get to see you in July!

Bless your heart for all you do for the animals there at Utopia - and for always bringing a smile to your friends. Your blog is the best ever bar none - you ROCK!

Hey Jude! Bless your heart for making me smile, and thank you for taking the time to read my blog and to make comments! You Rock More!