It Has Never Sparkled!

This morning, I was wide awake at five o'clock, in fact, I was wide awake all night, and never slept a wink. I went to bed at my usual time, but could not fall to sleep, because my stomach was upset, from eating some fried food, again. At three o'clock, I vowed to never eat fried food again—after throwing it up, in the bathroom. It was not a pretty sight—and neither was I.

At five o'clock, Tony climbed out of bed, and to his surprise, so did I. I was exhausted from no sleep, my stomach was fine, and I wanted to watch Kinky on Imus at six-thirty. I came into the kitchen, made some coffee, while Tony fed the dogs for me. When the Imus show first came on—his crew announced that Imus would not be doing the show today, because the T-line is down, at the Imus Ranch.

I don't know what a T-line is. I figure it must have something to do with telephone or electrical lines. Anyway, I was disappointed. Tony called Kinky at five-thirty to wake him up, "Kinky. Kinky, it is five-thirty. Kinky wake..."

"I'm up Tone. Thanks for calling me."

"Imus can't do the show today, because the T-line is down at his ranch." There was a pause. "I think it is a telephone line." Then there was another pause. "Okay, bye."

Before T. took off for the Old Timer, he suggested that I go back to bed and try to get some sleep. I did as I was told sorta. I went back to bed, but couldn't fall to sleep, because I was trying too hard. So, I got out of bed and decided to vacuum the trailer, because a nice woman, from Austin, was coming out this afternoon to see the rescue ranch, and to meet Tony and me.

Hazel was sleeping soundly in the closet, until I turned on the light, and dragged her out of the closet, and put her to work. After all of the dog and cat hair had disappeared—Hazel went back into the closet. Then I prepared our morning smoothies, as I watched and listened to The Today Show. When Tone returned home, we drank our healthy breakfast, and then I went back to bed for the second time, and Tony went outside to work with Aaron.

Fortunately, I slept over two hours with my dogs, then I got out of bed, to start making our lunch. When I walked into the kitchen, I was surprised to see some of T.'s crop—on the drain board, washed and ready to cook! Here is a picture of our first produce from the organic garden: 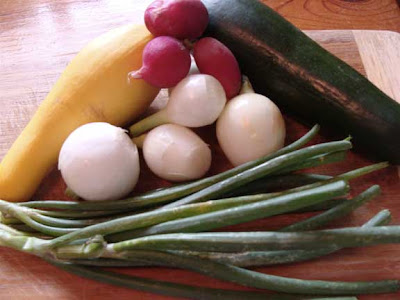 I sauteed his squash, the zucchini and onions—and they were absolutely delcious with the baked Tilapia! And tomorrow morning, I'm going to add the radishes to our morning smoothie! I can't wait!

Well, it is close to two-o'clock right now, and Sue should be arriving out here, within the hour. The trailer looks descent, the kitchen is cleaned up, but not sparkling—it has never sparkled, and I am fixin' to finish up this blog, because Thunder just started barking! I can't wait to meet Sue!

Kinky called and just told me that he will be doing the Imus Show—this Thursday morning, at six-thirty CST!

Y'all have a great Tuesday!

P.S. Sue came out and we really enjoyed her visit! We had much in common like our love for dogs, cats, all animals, eating healthy, sailing and music! And she is a writer, too! I love it!
Posted by cousin nancy at 1:12 PM

Nancy your photos are always so nice and clear. What kind of camera do you use?

Hi Christy! I use a Sony 8.1 mega pixel. It cost $300.00 and I love it! I have a Mac computer, and I also use iPhoto and Photoshop to tweak them. Thank you for the compliment!