And, I Was Right!

Last night, I went to bed early, and thank goodness that I did! Last night we had two different electrical storms, and fortunately, I slept right through them, because I was so tired.

This morning, I woke up refreshed, unlike yesterday morning. After doing my morning chores, drinking breakfast with Tony—I walked eight fast miles, and really enjoyed it! And, I am planning on doing another eight miles tomorrow with Leslie.

After catching up on my paperwork, returning phone calls and e-mails—I made lunch for Tone and me. I made my version of Moo Goo Gai Pan—without the moo or the goo or the gai—it was all vegetables and rice! I used all of T.'s trailer-grown onions, too, and Tony cleaned his plate, with the help of Hank and Little Girl—they like Chinese food.

After cleaning up the kitchen, Trigger took us to Kerrville. Our first stop was at Wolfmueller's Books to see Jon and Sandy. "Hi, Tony and Nancy," Mary Jo said, as we entered the bookstore. We visited with her for a few minutes, and then we went back to the office to find Jon, Sandy wasn't there, because she was home decorating. We had a fun chat, and caught up with each other's news—then we left to go shopping.

While Tone filled up Trig, at the pumps, I speed shopped inside H.E.B gathering our supplies! When I was over in the produce section my cell phone rang. "Where are you?" Tony asked.

"By the avocados," I answered. Ten seconds later—so was T.! I tore off part of my shopping list and sent him shopping over on isle one, to get bananas, apples, kale and lemons, while I sacked up some ginger, Breton crackers, and some Laughing Cow cheese.

Tony and I met up on isle one, where the kale used to be, but there was no kale! He and I then searched for kale, but we never found any. I guess, they were out of kale.

On our way to the check out counter, I saw that H.E.B had 'drastically' cut their prices on some cute, plastic cups and plates, so I bought eight of each. I bought them, because when we have company, I sometimes run out of plates and glasses. I think I saved over nine dollars—even though I was out sixteen dollars!

As Tone and I were fixin' to check out our full cart, a man said, "Hi Tony and Cousin Nancy!" I figured that it was Les, but I was wrong—it was our good friend, Pat G.! We had a short, but fun visit with him, and then we left the store with our groceries, and Trigger brought us home.

After unloading all of the groceries, I surprised Tony! Normally, we put up the groceries together, but this time—I didn't help him. As he started putting away our supplies, I went into the bathroom, and returned with my hair dryer, and plugged it into a socket. "What are you fixin' to do with that?" T. asked.

"I'm going to heat up the labels on these plastic plates and glasses. Someone told me that if you heat up the labels, they will peel off easily." And I was right! The labels slid off with no problem! When I was done, I hand washed my new party of eight dinnerware, and then I hand dryed them. When I was done, I took them into Outer Space, and put them inside my new cabinet. Here's a picture of them! 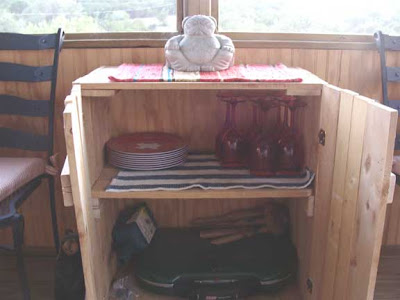 Tony and I then went over to the Lodge—to check on the Friedmans, because Kinky was gone, and he wouldn't be back until around five.

The Friedmans were fine and glad to see us, but not as much as the Hummingbirds were! Kinky's feeders were empty, so Tony and I filled his feeders with baby blue, sugar water. Talk about a bunch of happy little hummers glad to see us!

As we headed back to the rescue ranch, just after going over the river, but before going through the woods—we saw our first snake of the year! Yikes! It was a three foot long—water moccasin! It was resting next to the bridge, and when it saw Trigger—it dove off into the water, and quickly disappeared—thank goodness! I'm scared to death of snakes, so the rest of our journey was spent in silence—as I tried to forget seeing that snake. Snakes are another thing I dislike about Texas summers.

Kinky called me, a few minutes ago, to thank us for filling up his feeders for him, and then he asked us to please give him a wake up call in the morning, at six-thirty, because he is doing Imus at seven-thirty—fifteen minutes before I do the Harley Show! I hope that y'all can catch us both!

Y'all have a great evening!
Posted by cousin nancy at 8:45 PM

I love your new dishes Nancy, they look awesome ; ))
I tuned into Imus yesterday morning to get the website bookmarked and make sure I could tune in easily this morning. Well... it ended up being a crazy morning, so I missed it! :(
On the upside tho, when I did tuned in yesterday, around 9:30am EST, Imus mentioned that Kinky was going to be on the program tomorrow! So my timing was fine that way, but not for this morning. Bummer!

Howdy Fay! I am glad that you like my new plastic dishes—I will put it in my will, "And my outdoor plastic dishes, a set of eight, the ones made in China—goes to Fay in Toronto!"

Sorry about missing Imus. Kinky was great on Imus, this morning! Have a great afternoon!