Today has been fun! Before breakfast, Tony returned from his garden—carrying his yellow, five gallon, vegetable bucket! "You're not going to believe this, Nance!" Tony proudly said. I looked his way, he was grinning, and holding up the biggest zucchini, that I have ever seen!

"Oh my gosh, Tony!" I exclaimed, as I reluctantly looked into the bucket, fearing that it might be full of more fresh veggies. "That's the biggest one, so far! Congratulations!" Tony went back outside to water his garden, while I washed every vegetable in the nearly full bucket. I am happy that we have an over abundance of organic vegetables to eat, but I didn't know where I was I going to put his latest load, so I returned them to the plastic bucket, and fixed our healthy smoothies for breakfast.

After breakfast I walked five fast miles, again! Then I took care of some paperwork, and following that, Tony and I went to Hondo, to pick up Buttermilk—she was ready to come home, again! It seems that she is spending more and more time at the auto repair shop, but you would too—if you were a 1996 Ford Explorer. In other words—she's been rode hard, but we still love her.

When we arrived back at the rescue ranch—we stopped to meet our three latest rescued dogs, that Aaron had picked up at Hoegemeyer's for us, while we were gone! They are adorable! One is a wannabe female Min Pin, and the other two are male and female Fox Terriers. I haven't named them yet, but will tomorrow, when I take pictures of them—to post on our web site:
utopiarescue.com.

Kinky is back at the ranch! He called me this afternoon, to invite me over for a visit. I accepted his invitation, and decided to do one of those—pay it forward acts of kindness, or a 'do unto others—as others have done to you,' deals! So, I grabbed my camera, and Tony's yellow bucket—full of fresh, clean produce. The bucket was so heavy—I could barily lift it into the back end of the truck.

When Trigger and I arrived at the Lodge, I pulled a muscle in my shoulder, when I lifted the bucket out of the bed. "Hi Kinky! It's me!" I half-hollered, as I entered the kitchen. I heard Kinky hang up his phone, and then I heard footsteps headed in my direction.

"I'm fine, Kink. I brought you some of Tony's vegetable crop. I wanted to share them with you," I half-lied. Then I happily started unloading the pile of vegetables onto Kinky's kitchen table, as I was thinking—better here than there. When I pulled out the giant zucchini—Kinky started laughing, in amazement! When the bucket was half full, I took a break, and shot Kinky, and half of the load of veggies! 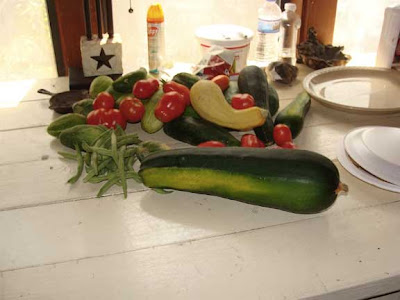 Howdy Shirley! I missed not seeing you at the event, and hope that everything is going great! We miss you!