Today has been great, fantastic and really weird! I'll start with great. This morning, around eleven-thirty, our friend, Joe, from Houston, showed up with his beautiful family, and friends—to adopt Mr. Ziffle! Earlier this week, Joe had called me about coming up on Saturday, to adopt Mr. Ziffle—so we we're expecting him. Even Mr. Z. knew that Joe was coming, because I had told him yesterday evening.

After handshakes, hugs and howdy doodies, I came inside the trailer. I called Kinky, to let him know that Joe had arrived, and then I grabbed my clipboard, with Mr. Ziff's adoption papers—ready to be signed. As I was walking out the door, the phone rang, and I did something that I never do—I answered the phone!

Fortunately, it was Kent, one of the best mailmen in Texas, "Nancy, I've got a really large package for you and Tony. It's a big box." Kent said. "I'll leave it on top of the mailboxes. I just wanted to let you know—in case it rains."

"Thank you, Kent. I'll tell Tony," I lied, but not intentionally. I then went outside, and simply forgot to tell Tone about our mystery package, because I was in the middle of a great adoption.

Joe quickly filled out the adoption form, and then we took off to Ziffer's pen, to tell him that he now had a new last name. I guess that he will hyphenate his last names— like I do.

As soon as we reached Ziffle's pen, Joe—went inside to talk to his newest family member. Mr. Z. knew exactly what was going on, too. His tail wouldn't stop wagging! Joe sat down on the ground, and then Mr. Ziffle gave him a gentle kiss on his cheek, and then another one! I was so happy for Mr. Ziffle, a tear came to my eye, but I quickly wiped it away, because I didn't want Tony or Kinky teasing me about it later.

Joe put a leash on his new furry friend, and walked out of the pen with him. He wanted to take his new dog for a walk, while his three daughters, and friends toured the rescue ranch with Tone. Before they were halfway to the the rescue ranch's gate, Kinky and Mr. Green Jeans arrived, and so did Todd B.!

Todd, is one of our wonderful, volunteer dog walkers. He had arrived earlier this morning, to walk our dogs, and he was returning with Henry, our big, sweet, beautiful yellow Lab, that he had just taken for a long walk. After Todd had taken Henry back to his pen, he came over to tell Mr. Ziffle goodbye. Here's a picture of Todd with Kinky. 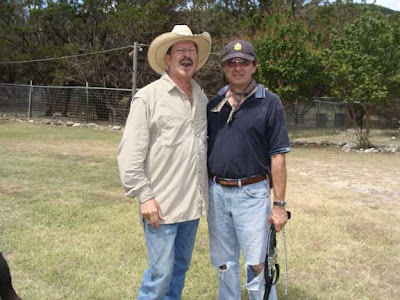 By now, Joe's girls and friends, had taken the tour, and they joined us, too. After intros, we visited for about fifteen minutes, and then we shot each other. Here is Kinky, with Mr. Ziffle and his new family! 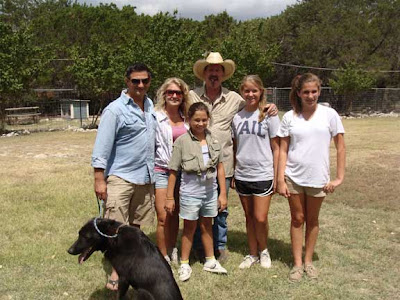 We visited a little bit longer, then it was time for Joe and Mr. Ziffle, and their gang of girls to take off. As they drove away, Kinky, Tony and I talked about how happy we were for Mr. Ziffle. "Third time's the charm, Kinky," I said. "He has finally found his forever home—in Houston!"

After Mr. Green Jeans had left our ranch—to return Kinky back to the Lodge, T. and I visited with Paul E., another one of our great volunteers, and a couple of very nice women, who had come out to see the rescue ranch and to take a tour. After they left, T. and I came inside to eat lunch. We had beans with cornbread, and it was delicious! Tony loves my beans!

Following lunch, Tony took off to get our mail, while I cleaned up the kitchen. Tone and Trigger, had been gone two minutes, when I remembered, that I had forgotten to tell Tony about the big package. Oh well, I thought—he will be surprised, but unfortunately—that didn't happen.

The phone rang. Carlton told me it was Kinky, so I picked up the receiver. "Nance, I've got a big package over here for you and Tony," Kinky said. "I can bring it over there, if you want me to?"

"Thanks, Kinky," I said. "I'll come over there to pick it up, in a few minutes." When Tony returned with our mail, I told him I was going over to Kinky's to pick up a big package for us—then Trigger and I took off.

Kinky and I visited for about thirty minutes—we mainly talked about Mr. Ziffle's great adoption and The Friedmans. When it was time for me to leave, Kinky pulled the big box out of Mr. Green Jeans and dropped it gently into Trigger's bed. Trigger and I then went over the river and through the woods—to the rescue ranch.

I tried to lift the box out of the bed, but couldn't because I am too short, so I went inside, and asked Tony to help me. He did as he was told.

Tone set the big box on the kitchen table, and pulled out his pocketknife. "It's from The Ranch House, in Stephenville?" Tony said, as he cut open the box. Tony and I had no clue who The Ranch House was. When he opened up the box, we found a very pretty gift wrapped large box. Tony then removed the pretty paper.

"Oh my gosh, Tony!" I half-hollered, with excitement, when I saw the box! Tony quickly opened up the box, and pulled out a 'Limited Edition Roy Rogers Chuckwagon Cookie Jar!' I thought that I was going to faint! The cookie jar was absolutely beautiful!

"It's from Ruthie and Kent," Tony said, as he handed me the piece of paper. "They wrote us a note in Pig Latin! They are the two nicest people."

I read their note to us, out loud, and translated it to Tony. "Ancynay & Onytay...Entkay & Uthieray." By the time that I had finished reading it, T. and I were laughing so hard—Lucky left the kitchen, and our dogs started barking at us! When our laughter subsided, I put the beautiful cookie jar on the counter, and took these pictures of it! 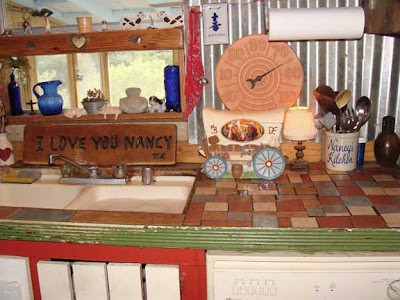 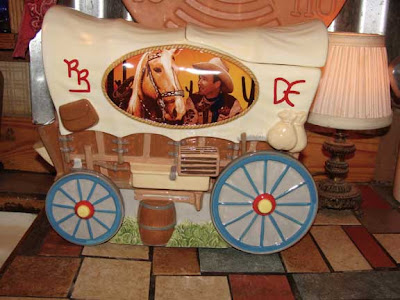 Isn't it beautiful?! I love it so much! After taking the pictures of it, I called Kent and Ruthie. Unfortunatley, I got their machine, and I left them a long message—thanking them over and over, again for the cookie jar. Tomorrow I will write them a note, and write it in Pig Latin, too!

At three o'clock, Tony and I took off for Kerrville, to buy dog food for our rescued dogs, because we had run out of the free donated dog food—that Paul finds, and delivers to us. We were nearly in the city limits when Tony points his finger, and says, "Nance, look! What is that up there in the sky?" I looked up.

We both saw this big, white shiny thing, way up in the northeast sky, that looked like a giant hot dog—and it wasn't moving! "I bet it's a U.F.O!" I stated. I then looked at Trigger's clock. "It's three-twenty-six," I said. "If we report it, we will have to know the time that we saw it." About ten seconds passed, and then it completely disappeared! "Let's go tell Sandy and Jon about it, before we go to H.E.B.!"

"It's our first sighting together," I said, "but not the first one that I've seen. Remember me telling you about that one, that I saw, a few summers back, that hovered in one place, for about four minutes, that had all of these beautiful flashing red and blue lights, above Robert and Sherry's ranch?" Tony said nothing.

When we arrived at Wolfmueller's Books, their place was packed with people—as usual, so we went back to their office, for privacy—to report our space ship sighting. I think they thought we were crazy, because they both started chuckling. In our defense, I said, "What else could it have been? We're talkin' now you see it—now you don't! We both saw it and watched it. And, it wasn't moving." They changed the subject, and we did a lot of laughing.

Y'all have a great evening!
Posted by cousin nancy at 10:10 PM

UFO is a term used to describe any aerial object that is not otherwise easily explained or described. UFO sightings have occurred throughout history. In fact, paranormal light sightings like shooting stars or the northern lights could be described as UFOs by observers in history who did not know how to identify such occurrences. Photos and video proof of UFO sightings can shed some light on the question, are UFOs and aliens real or an elaborate hoax? Find out more at http://ufos.org