This past Sunday, Buttermilk took us to Kerrville, so we could get supplies at Walmart. On our way to town, Tony and I talked about our Christmas presents for each other. Tony asked me to get him some more electronics, and I told him, "I want new dishes and...  After we go to Walmart let's go over to Pier One, so I can pick them out!" I was excited, but Tony wasn't.
Before we walked into Walmart, we turned on our cell phones, grabbed separate shopping carts, and went off in different directions. Ten minutes later, we were in the checkout line.
As we were leaving Walmart, we saw our friend and neighbor, Sherry and her daughter, Ashlie, who live at the ranch just beyond us. We had a fun visit. When I told them that Tone was taking me to Pier One to get one of my Christmas presents, they thought it was cool, but T. didn't. "I hate going to Pier One," he said, "and stare at dishes for an hour, while Nance decides which ones she wants. It's boring to me."
"Tone," I said. "It's the same thing as you dragging me to Bass Pro, and having to stare for hours at lures and tackle!" Sherry and Ashlie laughed—Tone was outnumbered!
While I looked at dishes, with Tony standing behind me making sighing sounds every three minutes, my concentration was interrupted three other times, by three somewhat snooty lady shoppers. They all complimented me on my beautiful necklace that I was wearing, and they wanted to know where I had bought it. "A good friend of mine custom made it for me. It's a one of a kind." I think it sort of 'bent their noses.' Tony thought it was pretty funny, though. We were only in Pier One for thirty-seven minutes. "Thirty-six minutes, too long for me," Tony remarked after leaving the store with my new dishes.
This morning, while Tony was outside doing his chores, I was inside doing mine. Hazel and I vacuumed the trailer, then I dusted, while Queen Bee washed a load of laundry. Then I washed our breakfast dishes! Here is a picture of my new dishes—the dinner and salad plate. I love them! And the bowls are pretty, too! 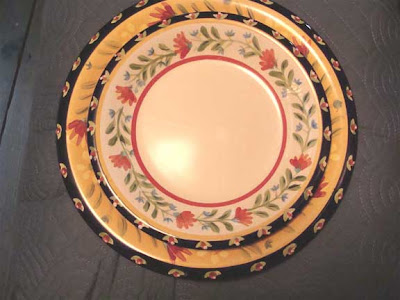 Scared that I was going to fix another exotic meal, T. told me that he wanted to take me out to lunch—his treat. An offer that I couldn't refuse, because I really didn't feel like fixin' lunch today. His exact words were, "Nance, I need to eat some American food today..."
So, we went to Kerrville to eat, and that is where I was almost mugged! After we ate an American lunch, which was good, this elderly couple, who had to be in their eighties, approached us in the parking lot, as we were walking towards Buttermilk. "I love your necklace," This tall, hefty-set, blue haired woman said to me. "I'll fight you for it!" Then she grinned and winked at us—thank goodness, because I don't know how to fight and never would!
Tony and I laughed. "I'll bet you ten dollars that my wife will win!" Tony teased.
"You're on!" The cute, old husband said. Then they shook hands and laughed.
"I love your necklace!" She said to me. "Where did you get it?"
"Karen Cares," I said, before being interrupted.
"Who cares? I'm hard of hearing, honey."
"Karen Cares," I said, loudly. "Karen."
"Karen Cares. I have never heard of them. Do they have a store here?"
"No ma'am," I half-hollered. "Karen is a good friend of mine, from New England. She custom made this for me and I love..."
"She lives in England. Well, you tell her that I said it was beautiful, honey."
"I will," I said, to the sweet, old lady. 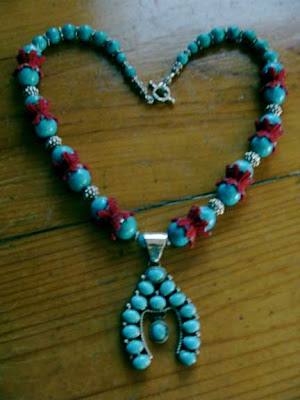 When we got inside of Buttermilk, Tony and I burst out laughing. On our way home we talked about how cute the elderly couple was. "Tone, that's gonna be me in ten years. Really. My hearing is already bad and..."
"That's you now, Nance!" Tone said. "Not really. I'm just teasing you, Babe. She had blue hair."
This afternoon Paul McCartney came back to the rescue ranch. Unfortunately, things didn't work out for him, and it was not his fault. Paul had been a perfect dog. Lisa picked him up for us at Hoegemeyer's, and brought him to the rescue ranch.
When Lisa and Tony walked Paul back to his old pen, to once again be roommates with Blue Bell, we all got goose bumps! Blue Bell went crazy with happiness when she saw Paul, and so did Paul! She was jumping up and down, barking and wagging her tail wildly, as Paul dragged Tony to his old pen. When Tony opened the gate, he unleashed Paul, and he and Blue Bell ran, jumped, romped and sniffed each other! Then it was Paul's turn! (Just kidding, I'm sorry. I couldn't resist!) It was like old friends being reunited! "They really love each other!" Lisa said. "I can't believe this! I thought Paul would be depressed. This is absolutely amazing! Look how happy they are!" 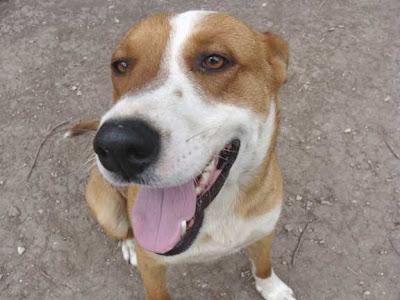 While Lisa walked our dogs, I went over to the Lodge to see Kinky, because he wanted to show me something. When Buttermilk and I arrived, Kinky greeted me at the gate. "Hi Nance. I want to show you what Frank and I did today in the Bone Orchard." I followed Kinky around the side of the Lodge.
Frank was standing at Gooie's grave taking pictures of it. "OMG!" I said, when I saw Goo's grave site. "Kink, I love it! It is beautiful!"
Kinky and Frank had put a skirt of very large, heavy rocks around the grave, and then filled in the middle with the rest of Mr. Magoo's balls and toys, that didn't make it into the grave with the other toys and balls. I will take a picture of it tomorrow and post it. It is so beautiful.
Y'all have a great evening!
Posted by cousin nancy at 7:34 PM

We were very saddened by Gooey's demise, but at least we've got that chewgar picture to remind us. Karen thought your experience with those ladies at Pier One was hilarious, and she'll be commenting separately. In your life, there is never a dull moment!

Nancy, That necklace sure does attract attention. It was so enjoyable to read the conversation with the old folks. It was a HOOT!
Herb and I were feeling blue after reading about Mr. Magoo and that story lifted our spirits. We feel so bad for Kinky. Thank goodness you and Tony were there with him. I'm so glad that we where able to meet Gooey. He was definitely The Leader of the Pack. He will be missed.
Karen Cares

Hi Karen and 'Erb! I just love y'all! Thank y'all so much for giving the chewgars to Gooie—he loved them so much, and one is in Goo's grave! And, Karen, I attract so much attention from wearing your beautiful necklaces, I am thinking about doing a full blown one to two minute documentary on them! Maybe calling it, 'The Secret to Cousin Nancy's Bling!'

Your necklaces are so awesome! I think that I am becoming semi famous in Kerrville for wearing your beautiful custon designed necklaces in town, because every where that I go, people stop me and compliment me on them or threaten to fight me for them. I love it!

Karen, you have single handedly made the Kerrvert clothes horses green with envy down here. I think that you should seriously consider opening up a store down here!

Stay warm up there, and please come see us when y'all can! Much love!

Cousin, Nancy, loved your cute story today. Still said to hear about Mr. Magoo's passing though. Also, have you heard anything about how Clark Kent is doing? I pray no news is good news-I am so hoping and praying that things are working out for Clark Kent in his new home!!